Tracing the female half of the family tree can be a bit tricky. Note that I said "tricky," not "impossible." Here are a couple of tips to keep in mind when you're having trouble finding a female in death records.

Keep Her Name in Mind

Records are usually created using the name that the person was using at the time. For men, that's easy. (At least the last name is.) For women, however, you need to know what name she was using when she died. If she was married, she was more than likely using her married surname.

If she was married more than once, try looking under all of the surnames you know she used. I have one ancestor who was married four times, but each time she was between husbands, she used the surname of her first husband.

Search for the Little Mrs.

Women haven't always had a lot of rights. Many historical records list women only in relation to their husbands or fathers. This is true of death records, especially in the early 20th century and before.  A married woman might be listed by her husband's name, as Mrs. Such-and-So. An example is this death record from Tennessee, which names the deceased as "Mrs. John Green." 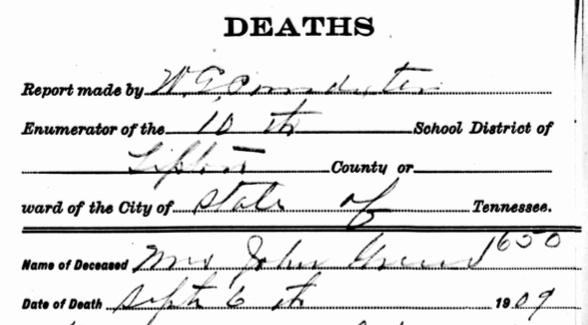 If you're not finding your ancestor under her name, search for her husband's name (leaving off the "Mrs." in your search). Also try using just his first and middle initials, in case she's recorded as something like"Mrs. E. L. Johnson."