What is a first cousin once removed? (As the joke goes "Can a cousin, once removed, be returned?") Is it the same as a second cousin? The short answer is "No, they're not the same thing." Let's take a look at what those cousin terms mean and how you can figure them out in your family tree.

Terms like "first cousin" and "second cousin" refer to what I call the degrees of "cousin-ness." It's an indication of how close the common ancestor is to them. The further back the first common ancestor is, the larger the number. 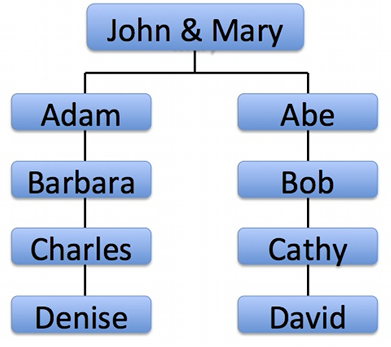 Similarly, Denise and David are third cousins. Their closest common ancestors are their great-great-grandparents. They are the same distance apart, so we don't need a "removed."

Barbara and Cathy: Their closest ancestors (John and Mary) are Barbara's grandparents, but Cathy's great-grandparents. The one closest determines the "degree." In this case, Barbara is closest. She's a grandchild, so that makes the degree "first cousin." Cathy is one generation different (she's a great-grandchild), so we need to "remove" her once. Barbara and Cathy are first cousins, once removed.

Working It Out With Your Cousins

If you want to calculate relationships between two people in your family tree, you can sketch out their descent from the common ancestors (like I did with John and Mary) and see where they are.

Many genealogy software programs, such as Family Tree Maker, allow you to choose two people in a family tree and calculate their relationship. Seeing what these terms mean and how you can calculate the relationship yourself can help you understand those relationships better.

Amy Johnson Crow is a Genealogical Content Manager for Archives.com. She is a Certified Genealogist and blogs regularly for Roots & Branches, the official Archives.com blog. Amy has deep roots in the Midwest and Mid-Atlantic states and she has rarely been to a cemetery that she didn't like.