Will the Real Jack Frost Please Stand Up? 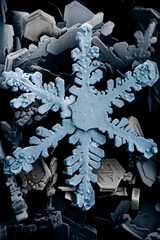 It can be fun to look up famous people in the census. With so many holiday songs playing right now, it seems like a good time to look up that harbinger of winter: Jack Frost.

Jack Frost appears numerous times in pop culture in the United States in the late 1800s. That makes the 1860 census a good place to start. Here's what I found in the 1860 census:

The 6-month-old Jack Frost living in Texas might actually be Jack Frost Martin. (If so, what an interesting name!)

Nicknames are something you need to keep in mind when you're researching. Although many parents today name their son "Jack," it has historically been a nickname for John. There are almost 400 John/Johnny/Johann Frosts in the 1860 census -- any of whom might have been called "Jack" by his friends.

How do we sort so many people of the same name? It's just like researching our own ancestors -- take every clue you can about the person you know is the right one. It could be his birth date, birthplace, information about his occupation, military service, family members, residences, etc.

What do we know about Jack Frost? Not a whole lot, except that he becomes popular in the U.S. in the late 19th century. His birth date is unknown and he doesn't have any known family members. He seems to live mostly in the northern part of the country, though he has been known to visit the South on occasion.

Unfortunately, we don't really have enough to go on to firmly identify the real Jack Frost in the census. (Though judging from the weather in my area lately, I'm leaning toward one born in Ohio!)

No matter who you are looking for, gather all of the clues you can so you can be sure when you've found the right person.

Amy Johnson Crow is a Genealogical Content Manager for Archives.com. She is a Certified Genealogist and blogs regularly for Roots & Branches, the official Archives.com blog. Amy has deep roots in the Midwest and Mid-Atlantic states and she has rarely been to a cemetery that she didn't like.