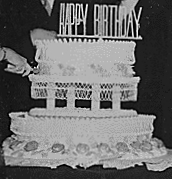 Archives.com is one year old! The site was originally launched as GenealogyArchives.com July 2, 2009, and it's amazing to think how far we've come in this short period. Not only do we provide access to over 1.2 billion records, but we also have hit some truly amazing milestones.

Our mission of simple and affordable family history research has clearly struck a chord, solidifying Archives.com as one of the most visited family history websites in the U.S. The first year was full of a variety of 'firsts' and major accomplishments. Here some of the most notable:

The team is proud of the work we've accomplished, but we're just getting started. We have some exciting enhancements on the horizon, and in our second year we'll be committed to implementing a variety of new features and improvements as well as adding new content.

Cheers! Here's to Archives.com's fantastic first year, and many more to come.