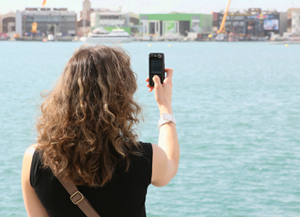 It's an irony of our time that we take more photos than ever before, but fewer are identified. We snap tons of photos with our phones. We share them on Facebook and Flickr. We add filters and post them on Instagram. While we have photos by the (virtual) bucketful, we tend to be lacking in organization and identification.

It doesn't have to be this way. With a little time and effort, we can have tons of photos and still be able to find the ones from the summer vacation of 2011. What's more, going through the photos to organize them is fun!

If you have a phone with a camera, you've probably had the experience of scrolling through dozens (or hundreds) of photos, trying to find that "one awesome photo" to show your friends. "Wait, I know it's here... somewhere... Wait! Come back!" Here's where albums come in handy.

Rather than leaving all of your photos in the default location (such as "Camera Roll" on the iPhone and some Android phones), create albums. Albums will let you group your photos together however you want. You could create albums for "Summer Vacation 2011," "Rachel's Graduation," or "Pinto the Wonder Dog."

This principle applies to photos on your computer as well. Whether you're using a photo program like iPhoto or Picasa, or if you're using your computer's file management system (like Finder or Explorer), don't dump everything into one giant folder. Separate the photos into albums/folders.

If you're on Facebook, you're probably familiar with tagging, which is where you identify or "tag" the people in the photo you've uploaded. Tagging helps people who look at the photo know who is in it.

It's the same with metadata. Metadata is often defined as "data about data." It's what helps describe a file (in this case, a photo) so that it can be understood. Metadata becomes part of the file itself, not like a caption, but embedded "behind the scenes" and can be read by various programs. The camera automatically adds some metadata, such as shutter speed, ISO, and whether the flash fired.

You can add your own metadata in programs like Photoshop Elements, iPhoto, and Picasa. This will allow you to add the names of the people in the photo, a description of the event, and other information that will help viewers understand it later.

It is important to use names in metadata. It may feel weird to call your grandparents by their full names, but using "Grandma and Grandpa" won't help someone viewing the metadata 10 or 20 years from now.

Think About Your Scanned Photos

Photos that you've scanned can suffer the same fate as your "born digital" photos. Leaving them all in one folder, not giving them good names, and not adding any metadata are surefire ways to get frustrated later when you want to find that photo of great-grandpa Ramsey. Albums and metadata are crucial to these photos as well. And if you use 1000memories, be sure to tag those ancestors!

If you need help with those boxes and boxes of photos you have, be sure to read David Haas' article "Photo Organization" and Laura Cosgrove Lorenzana's article "What Do I Do With All of This Stuff" in Archives.com's Expert Series.

Have Fun With It

Photo programs make it easy to organize and identify our photos. When you get started, you might find that what takes the longest isn't the actual organizing - it's the time you spend reminiscing over all of your photos!