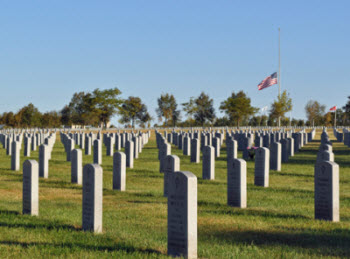 Memorial Day weekend is upon us and we encourage you to have fun with friends and family, and also to take pause to remember and honor those who have died in military service.

The origins of Memorial Day trace back to the years just after the Civil War, when towns across the nation began to memorialize those who had fallen in that conflict. Eventually Decoration Day, as it was originally called, was established as a national holiday observed annually on May 30. Congress officially changed the name to Memorial Day in 1967 and changed the date to the fourth Monday in May in 1968. But through the evolution of Memorial Day, one thing has remained constant: the remembrance of those who gave all.

Archives has several collections to help you learn more about your military ancestors. One new collection is Utah Military Death Certificates, which covers military personnel killed overseas in World War II and the Korean War. The state required a death certificate to be issued for these servicemen in order for them to be buried in Utah.

One man listed in the Utah Military Death Certificates is 20-year-old Ballard King Yeates. He was in the U.S. Army and died in Manila on 29 July 1942. He was eventually buried in Cache County, Utah, on 3 October 1949. A search in the World War II Prisoners of the Japanese records shows that Ballard King Yeates was a Technician, 5th Grade in the V Interceptor Command.

The 1940 census tells us more about Ballard Yeates. He was living in Nibley, Cache County, Utah with his father Alma, mother Grace, two sisters, and three brothers. Ballard had completed three years of high school; his older brother Carlos had completed two years of college.

By utilizing several collections found on Archives.com it's possible to piece together stories of Ballard, and others like him. It is sobering to put yourself in the shoes of Alma Yeates on that day in April 1940 when he talked with the census taker. His family would change dramatically in two short years, when Ballard would be gone and Carlos would be in the Army. (According to the World War II Army Enlistment records, 20-year-old Carlos A. Yeates of Utah enlisted in January 1942.)