Today in History: Theodore Roosevelt Takes to the Skies, First President in Flight

At Archives.com, we like to spotlight the fascinating things you can find in our record collections. We're proud to offer members access to millions of newspaper pages (U.S. and international), spanning 400 years courtesy of NewspaperArchive and the Library of Congress. Today, we wanted to share a lively story we found, about a milestone that occurred on this day 101 years ago. 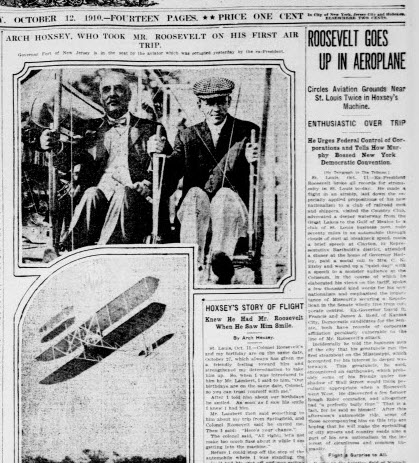 On October 11, 1910, Theodore Roosevelt became the first U.S. President to fly in an airplane. On his way to visit to St. Louis, a year and a half after he left office, he stopped at an aviation field in Kinloch, MO. A pilot named Alex Hoxsey had just descended from a flight and soon was introduced to the former president. "Colonel," Hoxsey said, " I'd like to have you for a passenger."

Roosevelt lost no time, replying only, "Thanks," and climbing into the plane.

An article in the following day's New York Tribune recounts the flight in great detail:

"The aeroplane sped quickly around the field at a height of less than one hundred feet. It made the first lap of a mile and a half before news percolated through the crowd that Mr. Roosevelt was Hoxsey's passenger. When he swept past the grandstand he leaned forward a bit and waved his hands. The spectators seemed frightened and remained silent, watching the aeroplane intently.

The flying machine sped by and made the turn for the second lap. Hoxsey could be seen to bend over and shout something into Mr. Roosevelt's ear. The engine cracked regularly, hurling the aeroplane forward at a speed of nearly a mile a minute, but from the ground it looked as though it were travelling much slower because it sailed so evenly and smoothly. There was not a breath of wind, and the engine did not miss fire once."

The pilot had been warning Roosevelt to hold onto the rail, lest his he interfere with the engines or fall out. "Mr. Roosevelt's first act after alighting was to shake Hoxsey's hand vigorously. 'It was great! First class! It was the finest experience I have ever had,' he declared. 'I wish I could stay up for an hour, but I haven't the time this afternoon.'"

Now running behind schedule, Roosevelt continued on to his other stops, where he spoke excitedly of his recent experience. At the state fairgrounds, he greeted a group of more than a thousand schoolchildren, apologizing for his tardiness. "As I know you all well, I know that you would all play hooky for a week to go up in an airship, so I know you won't blame me for being late."

You can read the rest of the newspaper article here (log in required). If you're not already a member of Archives.com, sign up for a 7-day free trial here. Historic newspaper pages are a great place to learn more about famous people, events, and our own families! Stay tuned for more stories from the pages of history.