Tracing female ancestors is often one of the brick wall problems many genealogists face. With missing maiden names, lack of a paper trail, and a long history of the "It's a Man's World" mentality, as well as a host of other factors, the research process can be especially challenging. Since March is Women's History Month, it's a perfect time to "Remember the Ladies." Here are five ways to really read records and learn more about the women in your family tree.

Comparing the total number of children in the household with the number of living children may help you track down those who were old enough to move out (regardless of whether they were single or married), and give you clues so that you can research forward. While there may also be children who were either born, or died, between census years, you can still use any discrepancy between the number of children born and the number still living to hopefully track down additional details in death and burial records, obituaries, and other documents. [You can learn more about using census records in other Expert Series articles.]

If your female ancestor became a United States citizen, you'll want to seek out her official application documents including her Declaration of Intent and Petition for Naturalization. Until 1922, wives were sometimes listed on their husbands' naturalization records. After that, you can find separate records for married women (children under 16 were on their fathers' forms). Before 1906, immigrants filed for naturalization in their municipal, county, state or federal court. Ancestry.com has several naturalization collections.

For naturalizations after 1906, you can submit a Freedom of Information Act request to the United States Citizenship and Immigration Service (USCIS). If the woman didn't naturalize, check Alien Registration Records (A-Files). Click the History and Genealogy link on the left side of the USCIS main page to get more information (Note: This is a fee-based service, and processing times are typically 90-120 days)

Marian L. Smith advises us, "There were other legal and social provisions, however, governing which women did and did not go to court to naturalize." Her article, "'Any woman who is now or may hereafter be married . . .': Women and Naturalization, ca. 1802-1940"inPrologue Magazine gives an excellent overview of the history and processes of women's naturalization in the United States.

On August 26, 1920, the 19th Amendment to the U.S. Constitution was finally ratified, granting women the right to vote in federal elections. (This is often commonly referred to as "Women's Suffrage"). However, your female ancestors may have been voting on the local level (for example, in community or school elections), or depending on the state where your female ancestor resided, she may have had the right to vote on the state level. For example, women temporarily had the right to vote in New Jersey as early as 1790 (but that right was revoked in 1807). Women in Wyoming began voting on a state level in 1869, and in California women were granted the right to vote in state elections in 1911. You can learn more about Women's Suffrage from the National Archives, Archives Library Information Center (ALIC).

To make sure you're not overlooking important sources, you should always learn the federal, state, and local laws that influenced your female ancestors' rights for voting and other matters.

4. Not Just a Housewife. 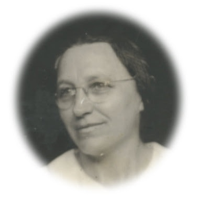 Don't assume that your female ancestors never worked outside the home, regardless of what you hear from family stories, or if you see them listed as "housewives" on census returns or other documents. In 1936, when my paternal grandfather went on disability after suffering an injury from his job as a millwright, my grandmother Elizabeth Alzo (shown at right) helped to support her family by selling tickets at Kennywood, the local amusement park in West Mifflin, Pennsylvania.

Women worked in all types of occupations and professions. Harvard University Library's Open Collections Program "Women Working, 1800-1930" contains many excellent resources about women and work, including books and pamphlets, diaries and memoirs, institutional records, key organizations, magazines, manuscripts, photographs, and trade catalogs. Find additional resources in archives near you using ArchiveGrid or the National Union Catalog of Manuscript Collections (NUCMC). Also, contrary to what we might think, women have served in the military throughout our nation's history. Learn more by following the links on the Women and the Military section of the ALIC site.

Your female ancestors may not have had Facebook or Twitter, but that doesn't mean they were any less social. Who were their neighbors? Check family documents or census records. When your grandmother immigrated, did she travel with family or a companion? Who witnessed her marriage or naturalization petition? If your female ancestor belonged to a church group, auxiliary association, club or organization, perhaps you can track down a membership application, scrapbook, cookbooks, or other ephemera to learn more about her social interactions. (Look for these in libraries, archives, museums, and even on eBay). Also, check to see if she is mentioned in local histories.

An excellent free resource on Women's History and Culture in the United States is "American Women," part of the American Memory Project at the Library of Congress.

When researching a female ancestor, consider not only her family situation, life experiences and culture, but also her relationships with her husband, children, relatives, friends, neighbors and associates. Look at the "when" and "where" of her life by researching the locality and the time period. Investigate the "why" through social history. Finally, make the most of this March by taking some time to carefully examine those records you've found, and set a goal to finally tease those elusive women in your family tree out of hiding.