Learn from Experts ›› Records Archives ›› Clues You Can Use: Dissecting Obituaries

Clues You Can Use: Dissecting Obituaries

Obituaries are useful resources for genealogists. They often provide a wealth of information about an ancestor's life tucked into what's into a relatively small column or few columns of space. Of course, the value, and often the accuracy of the obituary will depend on how much information was given, and by whom. But if you spend some time dissecting obituaries, you may find they provide some nice family history nuggets, not to mention some potential surprises.

Typically you find obituaries in newspapers. Most of the time they are labeled as 'Obituaries," but may also be found as "Latest Deaths," "Death Notices," or some other variation, depending on the publication. Sometimes you will find an announcement of someone's death as a news story, especially if the person was prominent in the community, or died under unusual or suspicious circumstances. There are a number of free and pay-per-access resources for locating historical newspapers. Use your membership to Archives.com search for obituaries in available collections. Free newspaper resources include the RootsWeb Obituary Daily Times, The Library of Congress' Chronicling America project, and the Google News Archive.

Consult the Online Historical Newspapers website for more listings, as well as the FamilySearch Wiki, which has an excellent overview of how to access and use newspapers in your research. You should also check your local public or university library, for old newspapers available on microfilm (many libraries also offer access via interlibrary loan), as well as ethnic newspaper collections such as those held at Balch Institute at the Historical Society of Pennsylvania and the Immigration History Research Center at the University of Minnesota. Don't overlook the local historical or genealogical society--these organizations may have volunteers working on obituary indexing projects. Furthermore, a search on Google Books may turn up other print resources for obituaries.

Keep in mind when searching historical newspapers for obituaries that they could appear anywhere from one day to several weeks after a person died. 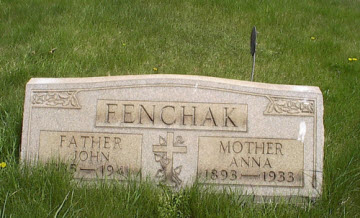 I knew very little about my great uncle, John Fenchak, until I obtained his obituary, which appeared in the September 26, 1941 edition of the Duquesne Times. A volunteer who indexes obituaries for the Mifflin Township Historical Society, located in West Mifflin, Pennsylvania sent it to me. When reading this obituary, I dissected it--in other words, I reviewed it line by line for clues I could use to obtain additional information. I extracted the following details:

Names: John Paul Fenchak (name of deceased); Other names: Wife's name (Anna); His parents' names (Michael and Anna "Maley" Fenchak); the names of his children (Anna and John). Also listed are his siblings, Anna Ragan (in Europe); and half-sisters, Anna "Balovar" (should be "Balovar"), and Elizabeth Alzo.

Why Important: The obituary lists the wife's first name (but no maiden name), and the names of his children, which can be helpful when searching for Census records. His mother's maiden name is another important detail to help track vital records in the old country. Knowing the names of his siblings can assist with doing collateral research. In addition, when reviewing obituaries, pay close attention to the "survived by" part (if stated). You can research these individuals for potential additional clues. But, don't assume that these are the only siblings or direct relatives. There may have been others who pre-deceased the individual but for whatever reason are not listed. In this case, another half-brother Mihaly (Mike) Fenchak, is not named. A family narrative stated that Mike lived in Argentina. It could be that he had already passed away, or that the person giving the information failed to include him.

Places: It's always good to know "where" things happened. Two places are specifically noted in this obituary: Duquesne, Pennsylvania, and Liverpool, England. Another important clue is the name of the church the deceased where burial took place (SS. Peter and Paul). In addition, there are specific addresses--for the deceased, and also the home of his sister.

Why Important: If you have the name of a specific town, you can pinpoint where other key events may have occurred that generated documents

Date Clues: While there are no specific dates mentioned in this obituary, there are pieces of information that can help with estimating dates. For example, it is stated that John Fenchak died on "Monday." The obituary appeared on 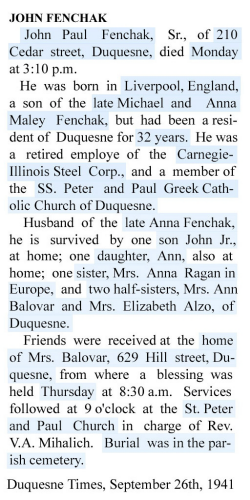 September 26, 1941. I consulted Timeanddate.com to determine that September 26th occurred on a Friday in 1941. The obituary stated that John Fenchadk died on "Monday" (September 22nd). Another key piece of information is that the deceased was a resident of Duquesne for "32" years."

Why Important: Having even approximate dates can help narrow the window for Census record searches, or provide an estimated timeframe for an immigration date. Based on the information given, I was able to locate my great uncle in census records for 1910, 1920, and 1930. I also found his naturalization records (Declaration of Intent and Petition for Naturalization), and located the passenger list showing he arrived on the Patricia at the Port of New York in 1904.

Miscellaneous Details: Look for other interesting tidbits in obituaries including occupations (e.g. retired employee of the Carnegie-Illinois Steel company), church, and social organization memberships (SS. Peter and Paul Greek Catholic Church),. In addition, the statement: "Husband of the late Anna Fenchak" indicates that his wife died before he did, and the fact that "friends were received at the home of Mrs. Balovar,..." tells me there was no funeral home viewing. From the notation of his burial in the "parish cemetery," I was able to track down the grave, and the burial record.

Errors: The obituary for John Fenchak includes many significant details, but I also noted there were some typos/misspellings (sister's surname, mother's maiden name), and a few other errors (I recognized them based on previous research I performed on Anna Bavolar and Elizabeth Alzo).

Obituaries can be genealogical goldmines. However, it's important to remember that an obituary is only as accurate as the knowledge of the person who provided the information for the newspaper. A spouse, child, relative, friend, neighbor, or some other individual may have provided this information. Therefore, any newspaper account is suspect until you can find evidence to support it. If you're fortunate enough to locate an obituary for your ancestor, take some time to really read it and highlight the key names, dates, places, and interesting details. A thorough dissection of the parts can often provide you with a clearer picture of the whole when it comes to fleshing out the details of an ancestor's life.