Having a tough time finding African-American ancestors? You can find your relatives in common (and some not-so-common) records -- you just need to know where and how to look.

Researching your family can feel daunting. It's easy to find relatives in the U.S. Census from 1870 to 1940. On the other hand, it's hard to find slaves. As famed author and genealogist Tony Burroughs points out in "Why Retracing Our African Roots Is So Difficult," challenges include "identifying slave owners, tracing slaves with only a first name, and scarcity of slave records."

Fortunately, all African-Americans were first enumerated in the U.S. Census in 1870. But it's a challenge to find newly freed ancestors during Reconstruction, especially between 1865 and 1869. And what about those 10 long years between censuses? African-Americans were mobile, especially after the Civil War and during the Great Migration from the South to the North from 1916 to 1970.

Here are five resources to help you find your African-American ancestors.

The 1870 census was the first one conducted after the Civil War, and was the first to count all African-Americans, including former slaves. But only one year before, 1869, may look like an automatic brick wall.

One way to hurdle the research gulf to 1869 is to use marriage records, as former slaves were legally allowed to marry after the Civil War. Check county records created between 1866 and 1869. They may be recorded as marriage bonds or certificates. For example, in North Carolina, marriage bonds filed at the state archives are "Statements of intent to marry that were attested by the prospective groom before the clerk of court in the bride's county of residence. Typically, one or more bondsmen signed as security for the forfeiture of the penal sum ... should the marriage not occur or prove to be illegal. Most marriage bonds gives the names of the groom, bride, bondsmen and witnesses, the county in which filed and the date. If accompanied by a certificate of marriage, the information may also include the date of marriage, the name of the person performing the rites, and towards the end of the period, the names of parents [1868]."

Cohabitation registers filed at the State Archives of North Carolina are described as "concerning the legal acknowledgment of preexisting 'marriages' of former slaves under statute of 1866, including cohabitation bonds and record of cohabitation." Look for cohabitation records in former slave states such as Virginia, North Carolina, Georgia, Kentucky, Mississippi, and Tennessee. Check Freedmen's Bureau records for marriages of U.S. Colored Troops veterans.

City directories are useful when tracing your family between censuses, as they list each household year-by-year. African-Americans were mobile; 6 million moved from the South to the North during the Great Migration from 1910 to 1930 and again from 1940 to 1970 when 5 million or more people moved. Using city directories for the years between the censuses will help you learn when the family moved, as well as pick up additional details.

Many directories list African-Americans as "(col.)" for colored or "(Neg.)" for Negro, and may include valuable information such as occupation, place of work, and names of spouses. The directory may even help you nail down a death date, when a wife is living alone (and may be described as a "(wid.)"), the year after she and her husband are listed in the same household.

Approximately 179,000 black men (10 percent of the Union Army) "served as soldiers in the U.S. Army, and another 19,000 served in the Navy." Check for service and pension records. If your ancestor enlisted in the U.S. Colored Troops and collected a pension, you may find a treasure trove of information: a physical description of the soldier, names of family members, death dates for the soldier and family members. (Service records also included a physical description.)

To find black men born between 1873 and 1896, go to draft registration records for World War I and World War II. These records are valuable for finding home addresses, employers, professions, physical descriptions, names of wives, relatives and other contact persons such as employers. For example: The World War I Draft Registration Card, 1917-1918, (from Ancestry.com) for Sterlin(g) Linwood Gunn. It reveals his birthdate, that he lived in West Virginia and worked as a laborer for U.S. Coal and Coke Co. Power Plant in Gary, McDowell County, West Virginia. Draft records also help you locate men - and possibly their relatives -- between censuses, for example, from 1917-1918 for World War I. Sterling Gunn identified his mother, Amanda Gunn as his nearest relative, living on 808 Depot, Winston-Salem, NC, thus revealing another avenue of research. 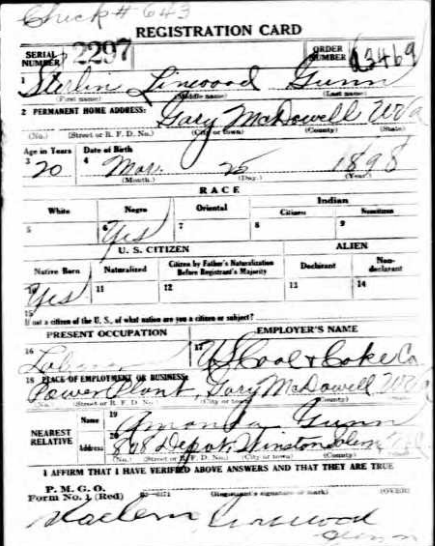 For those who have traced their family tree back to the founding of the United States, be certain to check out Archives.com's Patriots of Color. This free database includes records of people of color who fought for American independence or who aided the patriot cause. If your ancestor may have been in the War of 1812, be certain to read Kathleen Brandt's article "Researching Your 1812 Impressed Seamen."

Many counties required African-Americans to register when they moved to a county. Check county records for sections that are grouped by race or identify individuals by race. For example, free blacks, even those living in the North, often had to have a manumission record (statement of freedom) on file in the county where they lived. These may be filed with the deeds or in a separate group. Free blacks may also be identified by race in county and state records. Use Google Books to look for titles that include "Negro," "colored," "mulatto," and "freedmen."

As Burroughs notes, "new records are continually being discovered, catalogued, transcribed, and digitized." Look for records -- county, state, slave and others -- that are specific to where your ancestor lived. Websites and bloggers post updates -- check the sites and subscribe to emails to be notified when there are new or updated records available.

Use the hash tag (#) for topics such as your research states, #genealogy, and #AfricanAmerican. This will help you discover people and organizations to follow, such as state archives, state and national genealogy organizations, genealogy websites and bloggers.

Create a Facebook profile and join state genealogy groups. Group members may post links to chats, photographs, genealogy how-to articles, and websites. "Like" pages of the major genealogy websites, and you will see notices about webinars and "tweet chats" about genealogy research methods.

African-American research is challenging, but it is certainly not impossible. As with all genealogical research, start with what you know and work back to what you don't know. Using these five resources will help you have better success in finding your African-American ancestors.