As family historians we know the importance of vital records - birth, death, marriages, and divorces. These life events, recorded with the state or county, include personal data and family information that can set our genealogy research in motion. But many states have mandated Privacy Acts that restrict releasing vital records in order to bar the door against unauthorized use.

Vermont, North Carolina, and Washington are a few "open" states that allow researchers to order copies without restrictions. But, in the states that impose strict privacy mandates, these genealogy-rich records are not as easily accessible. Yet there's no reason to become discouraged when working with these "closed states." Whenever one door is closed, there's always a window opened. This old adage should be encouragement to all family researchers, especially when working in a state where vital records are not considered public records.

A common practice is to deny the release of birth certificates for seventy-five years after the event; and withhold death records from the public for fifty years. But Privacy Act restrictions vary by state. Louisiana blocks the release of all vital records for 100 years; whereas New Jersey birth records become public 80 years after the event. New York waives time periods for direct line descendents if the requester can prove lineage. See Genealogy Records and Resources.

The easiest vital records to obtain, in spite of privacy laws, are marriage certificates and licenses. A marriage certificate certifies that nuptials took place, but a genealogical treasure often overlooked is the marriage license (application) that can be used to confirm parent's, residence, previous marriages, etc.

Veteran service records carry a 62 year privacy restriction, but these files are full of genealogical gold. There are enlistment, draft, military service and pension records to name a few available documents. These are useful when looking for birth and death information. I've been able to retrieve marriage records, proof of dissolution of marriage and family information through veteran files. Pension records often include family and friend depositions, as well as medical reports. My best find was in the Civil War pension file of Uncle Willis. Attached was a detailed doctor's report of his physical and mental state, and a full explanation of why he was institutionalized. His birth, marriage dates, and names of minor daughters who I didn't know existed, were also included.

Prior to privacy mandates vital records collection were acquired by various repositories, so original records often show up in unexpected places. It would behoove the researcher to become familiar with state archives, historical societies, and local library holdings. I recently located the original Kansas City, Kansas marriage license collection, dating back to 1880, at the Wyandotte County Historical Museum Trowbridge Research Library.

Freedom Of Information Act (FOIA). The following records are exempt from the Privacy Act, allowing genealogists to access them by contacting the holding agency:

Whereas, census records and tombstone inscriptions can be used to narrow the timeframe of a life event. To pinpoint actual dates, funeral home records and local newspapers should not be avoided. In addition, many church archives house birth, baptism, marriage and death collections.

Proof of citizenship is a requirement for voters making Voter Registration records a great find. These records are exempt from the privacy act and often hold naturalization information, age, and place of birth, as well as residency.

Voter Registration Records of 1867 included newly emancipated male ex-slaves. And, if looking for a female ancestor, the right to vote was extended to women in the 19th Amendment of 1920.

To begin your search for Voter Registration Records check the State Archives or Historical Society. The Alabama Department of Archives and History has a searchable database. Other state websites offer online voter registration indexes. 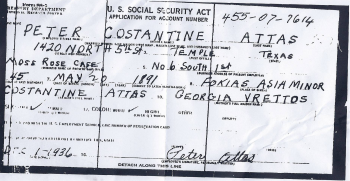 When privacy restrictions keep you from accessing an ancestor's vital records, try these resources:

Social Security Applications. Most genealogist are familiar with the free social security indexes. But don't forget the social security applications that were generated between 1936 and 1984. For less than $30.00 you can request a copy of your ancestor's SS-5, application for Social Security, that provides birth date, place of birth, names of parents, immigrant's origin, and more. Visit this page.

Railroad Pension. If your ancestor had a social security number beginning with 700 - 726 he most likely worked for the railroad and was enrolled in the pension plan administered by The Railroad Retirement Board (RRB). These records are often overlooked. Like social security information, they included death information and other personal and family data. It is possible that your ancestor had both a social security number and a railroad retirement benefits number. Write to the U.S. Railroad Retirement Board; Office of Public Affairs; 844 N. Rush Street; Chicago, IL 60611-2092.

From 1790 to the mid 20th century immigrants were able to use a county court, state supreme court, or federal court to file naturalization papers. Therefore, state and local courts must be queried. Recently after an arduous search from NY to Kansas, I found my subject's naturalization records in the Ft. Leavenworth County Courthouse 30 miles from my office.

Employment Records. Employment records not only have birth information, if pensions or retirement funds are involved, they often have a recorded death date, as well as beneficiary and family names.

Labor Union Records. Family researchers are familiar with miner union records that document vital records and accident reports. But, did you have an ancestor who was a butcher, tailor or skilled in another trade? Perhaps they were active in the Packinghouse, Sheep Butchers' Union, or Knights of Labor (tailors) union. To locate union records, begin with the State Archives, but university libraries also have collections of labor union records.

Immigrant Society Records. After hitting a brick wall on a Greek immigrant, I turned to the local Greek Orthodox Church records for assistance and uncovered a Greek American Protective Association formed in 1922. State Archives and Historical Societies may have a collection of immigrant societies. 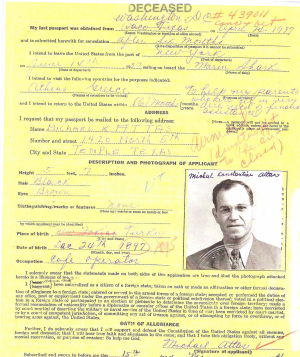 Passenger List. Immigration dates, home address, place of origin, next of kin, family names and relationships are all provided by passenger lists. One commonly overlooked entry are the notes that indicate those buried at sea.

Probate Records, Deeds and Wills. If your ancestor was a land owner, deeds and probate records were generated. Even if your ancestor (men or head of household) died without a will, documents to distribute assets to heirs were created. Expect to find death information, names of spouse, list of children, and more. These may also reveal a daughter's married name and that of her husband.

Your Right to Federal Records, published by the GSA Office

Law and Genealogy: Access to Records from The Maryland State Law Library

Where to Write for Vital Records: National Center for Health Statistics