Learn from Experts ›› Research Strategies ›› Building a Case With Your Genealogy

Building a Case With Your Genealogy

There have been times in my research when an answer hasn't been found immediately. Over the years, I have learned a few simple things to break down some long-standing brick walls. To illustrate, I will use as an example my third-great grandmother Abigail Stanley, who was born in Connecticut about 1790, and came west to Medina, Ohio with her sister Joanna Stanley Garrett.

Family trees and charts that may have been handed down in your family often have a grain (or more than a grain) of truth to them. Our goal as genealogists is to verify the information, and whenever possible, separate fact from fiction.

One of the family papers I inherited decades ago was a hand-drawn family tree, put on paper by my grandmother sometime in the 1930s. Over the years, using vital records, census records, land records, and wills, I have been able to verify that Abigail Stanley married James Scott near Lisle, New York, had a daughter Louisa Scott, and after that marriage ended came to Medina County, Ohio, where she married John Hickox. 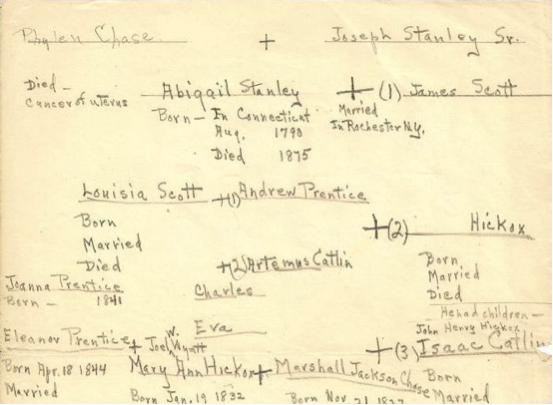 My grandmother was pretty accurate in the information she wrote down about her grandmother, Mary Ann Hickox Chase, who was the daughter of Abigail Stanley Scott and John Hickox. She would have heard this information first hand, and wrote it down not long after her grandmother died.

Don't Try to Fit a Square Peg Into a Round Hole

After years of research, I was not able to find any record of Abigail's supposed parents, Joseph Stanley and Phylen Chase, or even that they existed in 1790s Connecticut. I finally decided that my grandmother was mistaken in the names of Abigail's parents and deleted their names from my database and online family trees.

If you have names and relationships that just don't fit, consider at least temporarily taking them off your family tree. Even if you have this information from the most trustworthy of sources, if it doesn't fit, don't try to make it fit! Forcing it will only make things worse.

Often, in researching your family history, you will find that your ancestors moved from place to place with other family members or good friends. Abigail Stanley's sister Joanna Stanley Garrett was an important puzzle piece. Mentioned in the family papers, she and her husband Edmund Garrett came west with Abigail, and settled in Medina County, Ohio. In 1860 Joanna was living with the family of Webster Stanley in Wisconsin, who was possibly her older brother.

When I decided to get back to work on Abigail Stanley and her family of origin, I returned to the original papers written by my grandmother. Along with the original large family tree, she had written on small slips of paper information about individuals. One of those was Joseph Stanley.

But what was the connection to Abigail Stanley? Joseph Stanley's birth in 1785 made it likely that he might be Abigail's brother. After doing some searching online, I discovered a book called TheStanley Families of America by Israel Warren. On pages 117 and 176 it stated that Joseph Stanley, born in 1785 in Connecticut, was the son of Samuel and Abigail (Waters) Stanley. Joseph had several siblings, including Webster, Joanna, and "Nabby." What's more, Joseph married Mary Patterson, "daughter of Josiah L. Patterson, of Lisle, N.Y." They had several children, including Clarissa, Charles Seymour, Thomas and Harriet. And as of 1857, this family was living in Michigan. 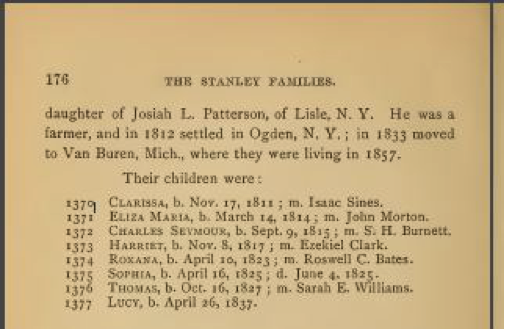 Use a Variety of Resources

So far, I had some corroboration of my grandmother's notes from a published book on the family, but that wasn't enough evidence for me. Next I turned to census records, and found that in 1850 Joseph and "Polly" were living in Van Buren, Wayne County, Michigan, with their youngest daughter Lucy.

Their burial held another piece of the puzzle. Joseph and Polly Stanley, along with their son Charles S. Stanley, were buried not in Wayne County, but in Ypsilanti, Washtenaw County. The dates on these gravestones were the exact same dates that were written on my little slips of paper. What's more, Mary Ann Hickox Chase had visited relatives in Ypsilanti, and I had other family notes referring to them. This made it even more likely that Joseph Stanley was Abigail Stanley's brother.

Take It Another Generation

Researching the various descendants of your ancestors (known as collateral lines) can be rewarding and instructive. Joseph Stanley's son Charles Seymour Stanley and his wife Sarah had several children, including Charles, John, and twins Mary W. and Myron H. Stanley, born in 1859 in Michigan (according to the 1880 census).

When Abigail Stanley's daughter Louisa (Scott) Catlin died in Medina, Ohio, there was an article in the 12 March 1885 Medina Gazette: "Mr. Stanley from Michigan is in town to attend the funeral of Mrs. Catlin. Miss Stella Wyatt returned with him and will make her home with them in the future." Stella Wyatt was Louisa Scott's granddaughter, and when she married George Smithe in Ypsilanti in 1890, the witnesses on the marriage record were M.H. and M.W. Stanley - another proof of the tie between the families.

One of my favorite quotes is "The past is another country - they do things differently there." One of the things that was different was the close tie between cousins, even second and third cousins. In today's mobile society we often lose track of the children and grandchildren of our parents' cousins; not so much a hundred years ago. Joseph Stanley marries in Lisle, New York, and went to Michigan with his growing family in 1837. In 1860 Abigail Stanley Hickox went to Michigan with her daughter, perhaps to be closer to her brother Joseph. Mary Ann Hickox Chase went to Ypsilanti in 1885 to help her niece Stella Wyatt settle in her new home. When Stella married in 1890, her cousins Mary and Myron Stanley were witnesses. Put all these pieces together and you have a picture of an extended family that kept in touch through the years.

Even with the continuing explosion of records coming online, consider letting the brick wall you're working on "rest" for a month or several months. As you let it simmer in the background, you can continue to read and learn and grow in your experience. When you come back to your problem, you will have some new ideas and new resources. Also, you may be missing something that's obvious, and a second look weeks or months later will unveil it.

Although the family papers drawn up by my grandmother so long ago state Abigail's death as being in 1875, I have yet to find an exact date or place of death for her. It's possible that Joseph Stanley's 1867 obituary would name his surviving siblings. Joseph Stanley also fought in the War of 1812; his pension application file might reveal a great deal more about his extended family. [NOTE: The Preserve the Pensions project is digitizing War of 1812 pension files putting online for free at Fold3.] A newspaper account of Stella Wyatt's wedding may mention out-of-town guests - perhaps even distant cousins living in Lisle, New York.

As you continue researching and have worked with a particular family over a number of years, you will develop an instinct that will tell you if something fits. By now my family is quite used to me yelling, "Gotcha!" when I discover a new record that I KNOW is my target person! Following the clues, knowing when to rest, and looking at it later with fresh eyes have been the key to my success.