A dry wind moved the stiff heat of mid July as I climbed into my air conditioned car and took a drive from Duxbury to the town of Dedham. Thirty cool minutes later, I turned onto a secondary road where cars zoomed in and out of a street jammed with gas stations, super box stores and a jumble of colorful signs - the clutter of modernity. My grandfather would have given a quick head nod and pronounced the familiar scene "progress." Peeling away the glitter of the speedway to find an old structure is a challenge. My destination is the Fairbanks House, the oldest timber frame house left in our country.

Where would I find the old house? Maybe it would be wedged between two gas stations. I scanned through the car windows carefully as I dodged the other cars. The secondary road slowed as the landscape changed to that of grassy suburbia. From my side vision, the sign for the Fairbanks House flashed as I sped past. I had seen pictures on the internet and recognized the bend in the roof and the brown, weathered clapboard. The flag said "open" so I turned around and drove up the narrow driveway, delighted and looking for a tour. 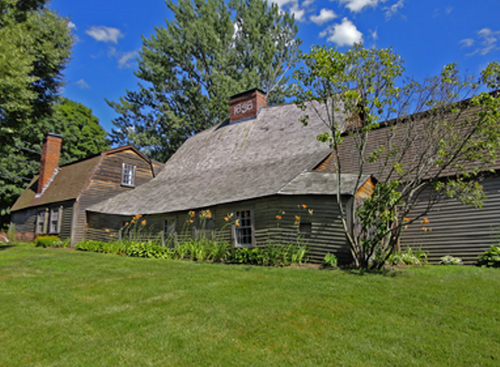 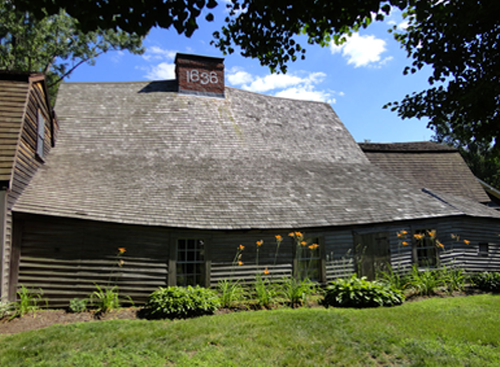 The parking is tight so I left my car sideways the lawn. Turning up the walkway toward the house, I noticed the beautiful perimeter gardens, lush with blooming tiger lilies. Large, old trees provided dark circles of thick shade on the lawn. It was better than I had imagined - so old and bent that the roof almost touched the lawn.

Tours begin on the hour and I had about 5 minutes to spare so I took some pictures of the exterior. Houses built in the 1600's often begin with just two rooms, one atop the other and expand out over the centuries. As families grew, they would add on haphazardly as the space needs increased. This house is no different, it started with two rooms on the bottom and two on the top. It is a salt box with two attached gambrels, one on each side. The design changed as sections were lovingly added over the years. Luckily, the final result is most appealing.

The guided tour1 was conducted by a Fairbanks descendant who was friendly and very knowledgeable about the house and its contents. She gave me lots of time to look at each room thoroughly. The public entrance is the gift shop. Stepping inside, the ceiling height is remarkably low. I am 5'8" tall and had to walk with crooked neck while in the room. It had a great feel of ancient American history! People really were smaller back in the 1600's.

The gift shop has a book on the Fairbanks family genealogy for sale as well as t shirts, and post cards. Pictures of the outside of the house are allowed but not the inside. Natural light floods most of the windows into casting a large beams of bright light into the dark interior. The guide used a flashlight when needed, especially in the old, indoor, two hole privy!

Each room was intact and dark. Pewter plates and the famous Dedham pottery were put away on the shelves in the kitchen. The fireplaces in the parlors were unusual, the thresholds jutting at right angles into the rooms - a designer special for their day. There is one cracked beam in the front hall way of the house. The museum directors are discussing ways to repair it in the future.

One of the Fairbanks family named "Rebecca" sold off a hand carved chest in the late 19th century. She and her sister held yard sales outside the house and inadvertently sold most of the contents of the house. They are pictured inside the house, the pair of them, sitting on the door stoop with some articles for sale. More recently, Fairbanks board members and directors have searched the country for some of the original furniture sold off centuries ago. They were successful in finding and buying back at auction this very chest and other pieces. The carved Fairbanks Chest is proudly on display inside the Gift Shop - a real treasure, having survived since 1652-1665. When the Fairbanks House is closed, it is moved back to its winter home at the Dedham Historical Society. 2 Most of the furniture is period and/or original to the Fairbanks house.

Each summer there is an ongoing archaeological dig. Nice pictures and events schedule are available on their blogspot at FairbankSarchaeology. If you are interested in becoming a lineage member and attending the annual Family Reunion, contact the Fairbanks House. There is a downloadable pdf lineage application on their web site. There is also a Fairbanks family West lineage society at FairbanksIntheWest. They have a surname index of descendants of Joseph and Polly Fairbanks who became Mormons and settled in Illinois. 3 They have log in request via e mail and you can sign up.

"The dendrochronology dates of circa 1637-1641 for the house's construction confirm that the Fairbanks House is the oldest timber frame house yet identified in North America. While other buildings of this type were constructed earlier, the Fairbanks House is the oldest known to still survive today." 4 Dedrochronology is a scientific method of dating wood by examining core samples of a beam and looking at the tree rings. The house could possibly be 374 years old.

The house had generations of Fairbanks family living and enlarging the house through the centuries, until 1908. The Fairbanks Family in American, Inc owns and operates the museum and "genealogical membership" organization. 5 The Genealogist will review applications (downloaded from their web site) and do your lineage in a personal way. They also have an annual family reunion with speakers and lunch in August.

As a Genealogist, I look for web site search boxes to make life easier or just to jump start my research process. The Fairbanks House web site is chock full of wonderful history and pictures but does not feature a search box for the family lineage. A book entitled Genealogy of the Fairbanks Family in America, 1633-1897, by Lorenzo Sayles Fairbanks is available for sale on the web site or in the museum gift shop on the premises. The family genealogist will also help you find the information needed for the lineage society. 6 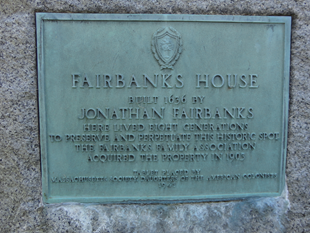 I am always impressed with a family lineage society who keeps a property in the family, so to speak. This is a huge undertaking, requiring organization and dedication of the descendants. The Fairbanks House is a treasure and unique to the Massachusetts landscape.

The Fairbanks House is located at 511 East Street, Dedham, MA and is open May through October and tours are available Tuesday-Saturday 10-5 and Sunday 1-5. Call ahead just to make sure that has not been updated as of the spring. You can also check their web site at www.fairbankshouse.org for more detailed information. Also included are some lovely interior pictures of the house including the ancient chest.

If you are in Boston or the area for vacation or business, I highly recommend a visit to our oldest timber frame house in America. Dedham is a short drive (30 minutes) from Boston and approximately one hour from Cape Cod. Not a bad trip for a morning or afternoon. You can shop in the 21st century stores after you are finished!