Learn from Experts ›› Technology ›› Following My Itinerant Minister Through Cyberspace

Following My Itinerant Minister Through Cyberspace

When I began researching Seth Ewer, Baptist Minister, I was stumped. Nothing turned up in my favorite places using on line subscription services. Discouraged but not disheartened, my plan was to do an exhaustive library and archives search, on foot. This would be fun but probably take the rest of my natural life. Luckily, the good Baptist minister lived in New England and so do I.

The Challenge Lies In The Absolute Beginning Of The Search

I feel compelled to follow my ancestors. The more difficult to find, the more fun I have. Sometimes I am hot on the trail and sometimes there are nothing but holes and blank boxes. Where did they live? Where did they die? Where are they buried? Any family? Questions are endless and as colorful as stones at the beach, turned over one at a time. You never know what you will find underneath that is enticing and also worth adding to your cache of information.

One day, while experimenting with Google, I decided to try entering his name in the search box. I don't know what made me risk it. Out came the usual list in thick, blue type - there was his name over and over again! I sucked in an audibly large breath. Was it luck? With mouth gaping open and no exhale forthcoming, I began to click on all the links and read all the entries, pages of them.

How Could This Be Possible?

Thanks to people (Librarians and Archivists) who plow in scans over the internet, there are untold numbers of resources available. There are libraries scanning books beyond their copyright dates and countless other pieces of information being added by the minute, world wide. The internet reminds me of diving into the deep end of the pool. If nothing else, it can provide the researcher with a good sense of direction, especially when the normal methods or trusted data bases come up dry.

Clergy Can Be Hard To Trace In History

The internet subscription services we all enjoy as genealogists, can leave out enormous pieces of information. They are based in census records and military service records, etc. If your ancestor falls outside the data, such as a minister, other avenues on the internet should not be overlooked and can be rich with good evidence.

I began to follow Seth and I knew nothing about him. A family member told me he was a Baptist minister. What sounded like a staid, quiet career was anything but and I had no idea that he had such a complex life lived in so many places.

The first hit pulled up his son Warren Baxter Ewer. This was a Google Books find. He appears in a short biography, the son Baptist minister and mother from Falmouth. It has a short history of his parents (Rev. Seth and his wife Eliza Bourne), his own history ending in California and to my amazement, a beautiful picture! Warren Baxter Ewer, son of the Baptist minister, was staring back at me through the computer screen. We were face to face, two centuries apart. I know of no other picture to represent his family, except this one. There it was waiting to be discovered, out in cyberspace! 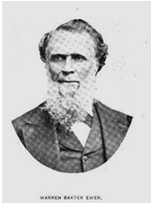 Warren Baxter Ewer appears in a book entitled Sons of Vermont which gives short, biographical sketches of founders. He later went to California during the gold rush and settled there, later becoming a journalist and publisher. What I learned from "Sons of Vermont" was that Rev. Seth Ewer and his family were in Addison, Vermont in 1820. This was a very significant and it started me down the trail.

Google Images is also worth searching. After searching through pages of listings, you may find some interesting pictures of the place and/or ancestor for whom you are looking. Ephemera collectors will sometimes scan old postcards and those may reveal details of place and sometimes pictures of people. Check EBay as well! Search the place you are seeking and see what comes under antique post cards.

Search The Area Your Ancestor Once Lived

When I placed the words: "Rock Church, Middleboro 1860" in the box, up popped a blog about Nemasket. This is the old name for the same area. There is a picture of Seth Ewer's Baptist church and the new church which followed after a destructive fire in later years. It is depicted in an old postcard of the church and surrounding cemetery. The information collected about the Rock Church, Seth Ewer's last calling was very helpful. I was able to post his grave site along with his second wife Lucetta Barrows Morton and also her first husband. All three are buried together in the church cemetery. 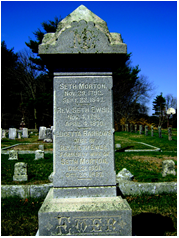 I have visited the Rock Church area in Middleboro and it looks remarkably like the picture below. There is a new church on the spot where the old one burned down but the cemetery appears the same. Notice in the picture how barren the landscape is behind the church. The tree line is thick today. The picture must have been taken prior to 1918. 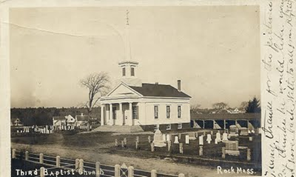 "Rock Baptist Church, Highland Street, Rock, MA, real photo postcard, early 20th century. The view depicts the 1852 church which was constructed on Highland Street and which burned December 4, 1918. To the left of the church may be seen the Ephraim Tinkham House (1767) and the Baptist Parsonage (c. 1872) on Miller Street."

Google Books is a marvelous resource and one which is growing as librarians and archivists scan more and more. Copyright laws are relaxed 75 years after the death of the artist/author so it is worth searching your ancestor periodically - more comes on line every day because more is freed. Put a name into the search engines and you will be pleasantly surprised. If you are unlucky and have a name such as John Smith, you could put the dates in for birth, death, marriage and a spouse. For instance, type in "John Smith m. Julia Hart 1823" or leave off the quotation marks for more hits. As I recently learned at a Genealogical Conference in a Google workshop , if you leave out the quotations, the search engine will automatically add the word "and" (i.e., John and Smith and m. and Julia and Hart) between the words. To eliminate the "ands", narrow the search, insert quotations. You can also Google the name and place such as "John Smith, Englewood NJ 1840" and see what comes up. If you patiently read through all the pages of entries, going back in internet history, you may see your ancestor!

Next I used the Archives.com database for U.S. Population Schedules or the Census. Seth Ewer appeared in the 1820 census for Addison, Vermont, which gives little more than a hard to read name and some tick marks to decode for his family members. The marks indicate that he is married and has several children of various ages. The family picture fit with what I knew from other sources. They must have moved to Vermont after living on Cape Cod. He must have been active as a minister in Addison or one of the surrounding towns.

His wife's name was Eliza Bourn[e] and she was the daughter of Thomas Bourne and Eliza Palmer of Falmouth. She was born in 1788, he in 1791. She was three years older! That's all I knew about her - Eliza Bourn of Falmouth. Bourne was spelled both ways, depending on which document I was reading.

Seth and Eliza were born into another era, a pre industrial and some say pastoral world as in the bucolic landscapes created by Albert Bierstadt. Grazing cows, dynamic clouds and greening landscapes in a verdant world where farming was the primary source of income. I could imagine the good minister and his family traveling to their church in such a peaceful setting. In reality, slavery was a permanent institution and the head of the household, Seth, was listed on census forms as "free white male". The Census forms had different schedules and made a distinction as to whether someone was free or white. The slave schedules were separate. Frederick Turner's "Slave Ship" was finished in 1843. He painted the very dark side of this world in his oil of the twisted, screaming bodies of drowning slaves being thrown overboard, devoured by sharks. The scene was inspired by a newsworthy scheme of insurance fraud. They threw the slaves overboard, rather than deliver valueless sick ones to port. The war which would nearly destroy the country occurred during the last 10 years of Seth's life and I would later learn that his sermons full of anti slavery sentiment. He was an ardent Abolitionist.

Church research had come up dry because Baptists do not believe in infant baptisms, therefore there are no records of their children. Marriage records may also be scanty. Did they write anything down? If they did, chances are it did not survive in time. The Town of Falmouth did not have a marriage record for Seth and Eliza, just an "intention." The churches grew and a few years later were felled like trees in a storm. There are references to American Baptist associations and minutes from meetings through the years. My visual imagination produces billowing white tents and people singing in the night. They would arrive by horse drawn buggy, then disappear after the fervor.

My research began to form a tree and I had fun assembling my puzzle pieces. Fitting them into place with citations is exhilarating. A trail began to form along the road with my itinerant ancestor. Next I found Seth Ewer in Weathersfield, CT, Harwich, MA, Wallingford, CT, Londonderry VT, Addison, VT and most remarkably, on the 1860 Census in Lenawee County, Michigan. There is no further information about Michigan other than Seth, Eliza and daughter Harriet Marvin and her 5 year old son Frederick. The four are listed together. Seth is listed as "Clergyman".

Between 1860 and 1863 there is a blank. Rev. Seth Ewer left Michigan sometime after the 1860 Census and the next record shows his remarriage to Lucetta Barrows Morton in Middleboro, MA in 1863. I know nothing of Eliza Bourn[e] Ewer. What happened to Eliza? I do not know where she died and have searched (by phone and letter) some of the towns close to Lenawee, Michigan, with no results. I did an exhaustive search of town hall clerks from New York, Massachusetts and Vermont in hopes of finding a death certificate - nothing. Internet searches on her are somewhat limited. They had a long term marriage and many children, so divorce seems unlikely. I have not ruled it out entirely. His second wife was mentioned in his will along with all of the children by his first marriage to Eliza. My research will continue until I find her.

Reference And Double-Check Your Information

The internet has limitations in the manner of which information is scanned into cyberspace. Large search engines have the benefit of all scanned information as opposed to just census and military data bases. It also includes some of the family trees scanned by individuals. All need to be verified for certainty but it is worth checking, even if you have to wade through blue, type faced lists by the page. Some people born in the 1700's are alive and well, their memories waiting to be found on the internet today!