The story of Pilgrims John Alden and Priscilla Mullins is intriguing. John was the cooper aboard the ship Mayflower. His job was to make barrels of all sizes to store foods, clothing, utensils, and other supplies for the crossing and also on land. John was important and his skills invaluable. He helped build houses in the new colony. Priscilla survived the first winter; her parents and brother were not so fortunate. She was barely a teenager when she, along with the other young women, helped feed the entire colony.

Henry Wadsworth Longfellow wrote about Priscilla in The Courtship of Miles Standish. Captain Miles Standish was interested in marrying the teenager who was now an orphan. Standish was shy and asked John Alden to seek out Priscilla and find out how she felt. In doing so, she answered, "Why don't you speak for yourself, John." Thus began their own romance and marriage. In honor of strong-minded women, the Alden Kindred of America, an association of John and Priscilla's descendants, hosts a dinner and honors women who are community leaders. The annual Speak for Thyself Awards Dinnerraises money for upkeep at the Alden museum.

The Alden Kindred of America has a database of Alden descendants on its website. 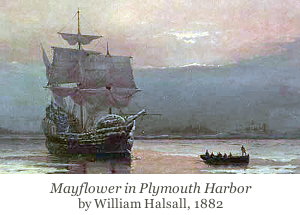 With thousands of names, you can go to the index and read down the lists of surnames. Click on one and up will pop a pedigree and more information to digest. It is a gift to genealogists and history buffs. If you are have New England ancestors and would like to know if you are an Alden descendant, this is a good place to start your search.

Are you related to the Aldens? There are several resources for you to check. Mayflower Families Through Generation Five, Descendants of the Pilgrims Who Landed at Plymouth, MA December, 1620, Family of John Alden by Esther Littleford Woodworth-Barnes and edited by Alicia Crane Williams is available in many genealogical libraries.

The annual meeting of the Alden Kindred of America is unique. It is always held on the first Saturday in August - you can depend on it. Alden descendants arrive by mid morning, just as the sun begins to bake. They come from all parts of the country to listen to reports and visit with fellow descendants of John and Priscilla. They sit together in a white tent on the grounds of the Alden House Historic Site in Duxbury. The Alden House has been owned, lived in and operated by Alden Kindred continuously since the house was built.

A large, gentle fan moves the thick air, tablecloths ruffle and cut flowers nod in glass water vases. The fan's strong whir cuts the oppression and dampens voices. One cousin hand cut all the flowers and made arrangements for centerpieces - a caring soul. A welcome, stone cold sandwich and iced tea make the meeting enjoyable. Then the family picture - yes, everyone. The tradition is to carry chairs, help the elderly up a small hill, sit in the sun (or pouring rain) and take the family portrait in front of the house. It requires jostling and wiggling everyone into the picture frame. The collection of these family portraits begins in the early 1900s.

After the meeting, attendees stroll around admiring the property, which includes a modern barn with a welcome blast of ice cold air from a central air conditioner. Then, we go back into history for tours of the old house. The first thing noticeable is that the house sits on its lot facing the wrong way. The front door faces a small lawn and then woodlands. In ancient times, it faced the right way, to take advantage of the southern exposure. Originally, one room was build atop another. It was a tall, thin wood frame house. Visitors entered through the front door and found themselves directly in the parlor, which included a large bed. The bed was the furniture showpiece of the day. The whole family slept together, some in the bed and some on straw piled on the floor. One fireplace housed the cooking activities.

Over time the house grew with careful additions. A second bedroom with fireplace, workroom and third bedroom were built upstairs. The workroom housed spinning wheels, carders for raw wool and maybe a loom or two. A ladder staircase led upstairs where older children could sleep. By today's standards, the house would be very difficult to live in - very cold in the winter and piping hot in the summer. There is little insulation and the walls are thin by today's standards. The great room fireplace and oven downstairs had multiple fires going at one time, baking breads all day providing residual heat. I theorize that the family moved downstairs in the winter because the upstairs could not be warm enough to sleep.

The Alden house was probably not built by John himself but by one of his sons or grandsons. The original house was located several hundred yards away. A path leads through a small patch of woods to a field where the site has been carefully marked. An Eagle Scout provides the details and signage on the trail. The house, which still stands, may have been built in the early 1700s. There have been studies to determine the age of the wood. The website is packed with history and detail about the house and includes a virtual tour.

Another mystery is a gun that was found inside the wall of the Alden House during restoration in 1924, reputed to have belonged to John Alden himself. The gun is now on display at the NRA National Firearms Museum in Fairfax, Virginia and on the museum's website.

The Alden House Historic Site is open June through September on a part time basis. Off hours and private tours can also be arranged. The society also offers a museum membership package for non-family members. You can join for a nominal fee, attend the luncheon in August, the Speak for Thyself dinner, and the best haunted house in the area dedicated to entertaining families with school aged children.

John Alden and Priscilla Mullins started a family that has countless descendants today. The Alden Kindred of America and the Alden House Historic Site are great resources for learning more about this Mayflower family.