Discovering that you descend from nobility is not always a genealogical goldmine. Making such a connection will not automatically have your family tree suddenly grow before your eyes. The "Who Do You Think You Are" episode on Brook Shields almost suggests this though. While that episode is quite right, in that anyone could have noble, if not royal, blood flowing through his/her veins, tracing noble family trees can be very challenging, and in that sense, very eye-opening. My 20 years of experience researching German and Austrian noble families has demystified their genealogies, healthily debunking the "sudden" and the "goldmine". By "healthily debunking", I mean that my research has uncovered many truths about the (German and Austrian) nobility, giving them an important grounding in reality. Knowing these truths can immensely help the genealogist trace a noble lineage.

The Genealogical Proof Standard should definitely be applied to noble genealogy research. Even if a family archive on the noble family exists and you (the researcher) have been able to find it or if you find an article on the family in a publication series dedicated exclusively to royal/noble genealogies, reconstructing the family tree through primary sources including church records is very important. Primary records (e.g. church records) can, like usual, substantiate as well as challenge the accuracy of family papers and documents or publications, thereby uncovering false ancestral claims, documenting black sheep erased from family notes, or correcting family tradition. Importantly, not unlike for commoner genealogies, finding the primary records that build a noble family tree can be a frustrating, if not futile process.

This reality goes against the popular understanding of nobility. Throughout my research, I have run across many folks who believe that a noble of the last, say, two hundred years has a long pedigree that stretches back many centuries to a medieval knight and his lady. The common assumption is that the pedigree is well documented and that the accompanying family history is well known because its members played significant roles in recorded history, figuring in local, provincial, or national events as military officers or diplomats or the like, the progenitor being a medieval knight. Many folks also figure that a family with a coat-of-arms means all of that surname has the right to that coat-of-arms. That is a lot of popular understanding.

Unintentionally, my research into German and Austrian noble genealogies has overturned these elements of popular understanding. My introduction into the reality of noble genealogies was the moment when I discovered that a great-great grandmother of mine came from an "old noble Austrian family". No sooner had I learned this, I was immediately confronted with a seemingly unimaginable (noble family) genealogical case: almost nothing was known about her and unknown was the family tree beyond her father. There was neither a "goldmine" of information nor a "sudden" long pedigree, nor a known coat-of-arms. And given that she was born only in 1848, that wouldn't make the family very old. The family tradition became more a fairy tale and the world of the nobility as I had come to understand it was shattered to pieces. But how could this be?

For the English speaking world, besides the many businesses that advertise producing your family's coat-of-arms and surname's definitive history to the Middle Ages, the UK peerage systems are arguably the most well known, if not the only known system(s) of nobility in the world, since there is no language barrier and most everyone knows of Queen Elizabeth II and the late Lady Diana Spencer. Additionally, the peerage system's authoritative genealogical encyclopedia Burke's Peerage and Gentry is reasonably known and assessable to researchers in US libraries. So, perhaps not too surprisingly, the popular understanding of nobility originates from these few sources, besides from legends of knights saving damsels in distress.

Burke's Peerage and other published works on English noble families (e.g. the Fitzalan-Howards, Percys, Spencers) were my first sources. Perhaps my exposure to non-English language works was limited due to the language barrier. So, maybe it only seemed like only the United Kingdom had a system of nobility, and its better known genealogical examples confirmed the idea of medieval origins: its sovereign head can trace her genealogy back to the 5th century and many peers have family histories extending back to the Norman Conquest. But not even my local, big city reference librarians were able to assist me in my noble Austrian genealogical research. For all practical purposes, without the modern advantages of technological advancements, my grasp of nobility was an odd mixture: either all or nothing. Either a noble genealogy extended well into the Middle Ages or was untraceable.

The Internet and digitalized documents have fundamentally transformed the world of noble genealogy research. Twenty years after I started research, we have Google, for example. A simple keyword search for "nobility" introduces you to wikipedia's article, an excellent first step to finding more reliable sources through its External Links. The digitalized version of Siebmachers Wappenbuch (see Ancestry.com or wikipedia) provides easy access to Germanic surnames with coats-of-arms. The Family History Library also has a collection of sources on German and Austrian nobility and heraldry.

Before any of these secondary resources, though, when researching German and Austrian noble genealogies and family histories and learning about the German and Austrian nobiliary cultures and systems, the online databases of Collegium res nobilis Austriae or the Institut Deutsche Adelsforschung should be consulted first and foremost. Their primary missions are to assist people in their genealogical and historical research of noble families coming from Austria, Germany, and the other successor states of the Holy Roman Empire of the German Nation. Also helpful can be Paul Theroff's An Online Gotha or Herbert Stoyan's WW Person.

These sources, as well as the Europ�ische Stammtafeln series, are the collective authorities on noble genealogy (from 1763) of the Holy Roman Empire of the German Nation and its successor states, primarily the German-speaking lands. Consulting them will confirm a noble ancestry, challenge a noble lineage, or cause you to dig further into archival records in hopes of filling in the (generational) gaps or uncovering a noble family not listed.

The Gotha, Collegium res nobilis Austriae, and the Institut Deutsche Adelsforschung will also introduce you to the reality of noble genealogies by referring you to standard reference material on Germanic nobiliary law, noble house law and inheritance practices including of titles and coats-of-arms, and encyclopedia of important figures among the nobility. They will also mention important nobiliary distinctions: the ancient nobility (Uradel) and the patent nobility (Briefadel). 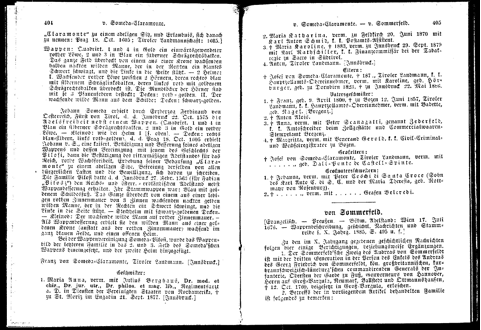 It is the confirmed Uradel who can trace their unbroken lineage of nobility to before the year 1350 or 1400 (i.e. the Late Middle Ages). The vast majority of German and Austrian noble families do not belong to the Uradel, being instead Briefadel, their status of nobility deriving from letters patent. The earliest known letter of nobility was granted in 1360. In other words, the typical noble family is not able to trace their noble lineage to the Late Middle Ages (ending 15th century), to say nothing of the Early or High Middle Ages (6th-ca. 14th century).

Not to diminish its authority, the Gotha is naturally limited due to publication parameters. The genealogies that appear in the multiple series typically list the known living members of the family (at time of publication) and trace the family's ancestry back two, three, or even four generations and often include a short summary on the family's noble origin and development, including a description of their coat-of-arms. Since the Gotha series first appeared in 1763, clearly other secondary sources must be consulted to trace the genealogy back further, if the family's (noble) origin predated 1763. On the other hand, unless someone has already conducted successful (painstaking) research to trace the family's ancestry and chosen to publish their findings, another secondary source (i.e. published family history) may not yet exist, so that searching for primary sources like church records becomes required.

Complicating the task of tracking down church records is the incompleteness of some articles in the secondary sources, including the Gotha. The missing information is typically the nuts and bolts of genealogical data: dates and places, and sometimes, even names. Confirming the accuracy of the secondary sources can consequently be a very difficult task: where to look for a birth, marriage, or death record, or other primary sources? An example of the best case in the Gotha would be the article on the von Rechberg und Rothenl�wen zu Hochrechberg family (Example 1). Less than genealogically helpful is the contribution on the Someda di Chiaromonte (Example 2); notice the lack of dates and places, and for the last listed individual, a name.

It is from these examples and from my experience that I conclude that the noble families with a more detailed article in the Gotha are likely the ones who have been more diligent about keeping family records and documents and who validate the popular understanding of noble families: their genealogies are well documented. Conversely, those articles with incomplete/missing information prove that if you discover a descent from a noble family, for example a Germanic one, you are not guaranteed a genealogical goldmine that leads to a family tree already fully researched, which extends back 600-650 years to the Late Middle Ages. Admittedly, to find your family in one of the Gotha series will certainly establish the family history and heritage. The proven genealogical connection is lacking. The task of discovering the primary records to prove the genealogical connection can makes noble genealogy research as difficult as tracing a commoner ancestry.