Learn from Experts ›› Military Records ›› Finding the Regiment: The Key to Researching Your Civil War Ancestor

Finding the Regiment: The Key to Researching Your Civil War Ancestor

The American Civil War caused some of the richest genealogical records to be created. From service and pension records to records of veterans homes and organizations, these men and their families are some of the best documented in the late 19th and early 20th centuries. These records give genealogists great information about family relationships as well as insight into the lives and circumstances of the veterans.

Over 3 million men fought in the American Civil War. While that's great for increasing your odds of having a Civil War veteran in your family tree, it can also complicate things. Unless your ancestor had an extremely unusual name, chances are there was more than one man with that same name who served.

Just like any other genealogical puzzle, there are some pieces of information that will help you sort out the dozens of John Johnsons or Thomas Smiths. Besides his name, you'll want to have an idea of when he was born, where he lived, and who his family members (wife and children) were. However, the key to telling which military record belongs to your ancestor is identifying which regiment he served in.

If you want to get into pension records, it isn't enough to know that your John Johnson served. You'll need to know what regiment so you can request the correct one. Knowing the regiment will also help you when you see any record related to Civil War service.

What Is a Regiment?

A regiment in the Civil War was a unit comprised of approximately 1,000 men in 10 or 12 companies. Most regiments were raised within a state and were designated with a number, the name of that state and what type of unit it was. When you see a reference to someone serving in Company D, 173rd Ohio Infantry, the regiment is the 173rd Ohio Infantry. Similarly, you will also see references to regiments such as the 1st North Carolina Cavalry or the 6th Michigan Heavy Artillery. (Joe Bilby's article "Civil War Unit Structures" has more detail about how Civil War units were arranged.)

Many of the service-related records for Civil War veterans mention the regiment(s) the person served in. Identifying it will save you a great deal of frustration when looking at these records. Here are some sources that could help you.

The records created at the time of an ancestor's death can yield tremendous clues, including information about Civil War service. This includes obituaries and tombstones. Sometimes they just give references that the man served in the Civil War. However, some actually name the regiment.

Thomas Benbow's obituary from the Cambridge City (Indiana) Tribune is an example. Not only does it name his regiment, but it gives enough information that we can make sure it's the right Thomas Benbow. From it, we know his age, his former home, and where he is buried.

When we think of tombstones for veterans, we often think of the white marble tombstones issued by the federal government. Those often list the regiment, but the ones from the Civil War usually do not list the man's birth or death dates. This can make it hard to know if it's the right person, but it does give a clue that we can follow up on. 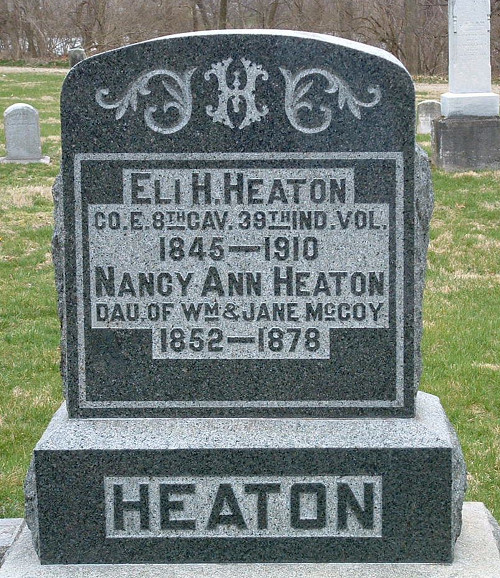 One of the great losses in genealogy was the loss of the 1890 federal census. Almost all of the "regular" part of the census was destroyed in a fire. However, there was another schedule that fared better. A special schedule of Union veterans and their widows was taken at the same time as the 1890 census. The veterans schedules still exist for states Kentucky (approximately half of the state) through Wyoming.

Although the schedule was supposed to be for Union veterans and widows, there are some Confederate veterans listed. In some cases, the record was marked through, but is often still legible.

The veterans schedule doesn't list everyone in the household, so you'll have to use the location as a clue to tell if it is the correct person. Start with where the veteran or his widow were living in 1880 and in 1900. If you already know your ancestor's regiment, you can use the 1890 census with more confidence that the record you're looking at pertains to your ancestor.

Information includes the veteran's name, regiment, dates of service, and often includes comments about his service, such as disabilities, wounds, imprisonments, etc. Be sure to read both the top and bottom half of the page to get all of the information.

The record below is from Kalamazoo County, Michigan. The top part shows Ann, widow of Peter Higgins of the 13th Michigan Infantry. We also see William Costigan of the 33rd Indiana Infantry and Geo. W. Keyes of the 1st Michigan Infantry. The bottom part of the record gives the additional information related to their post office address, disabilities, and additional remarks. 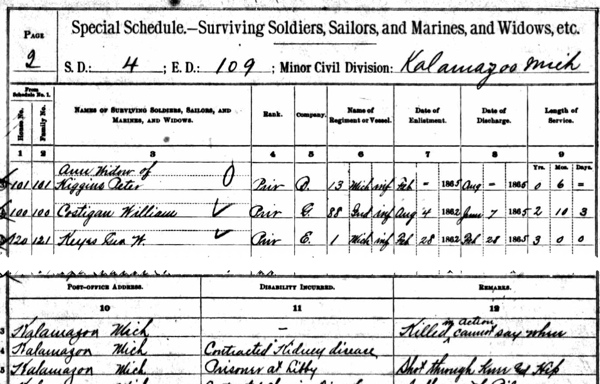 The 1890 special schedule is available on Ancestry.com.

The golden of age of county histories was the late 1800s and early 1900s, which coincides wonderfully for Civil War research. County histories in this time period are often filled with lists of men from the area who served as well as biographies of many veterans.

The Civil War marked the first time that the U.S. government required veterans to register their military discharge in a court where they resided. (Note that Confederate veterans did not have this requirement.) If you have an idea where your Union veteran was living immediately after the war, inquire at that county's courthouse if they have the discharge certificates. The court or office where it was recorded varies; in some locations, it was the Recorder's Office and in others it was an Auditor's Office or a Clerk of Courts. The local genealogical society may also be able to point you in the right direction.

Don't overlook the sources you might already have in your possession. Do you have any letters or journals? Go through them with a fine-tooth comb for clues! Also look for memorabilia such as ribbons and buttons from veterans reunions. Photographs are sometimes labeled with the name of the regiment.

With so many who served in the Civil War, your chances of having a veteran in your family tree are pretty high. Unfortunately, there are usually multiple men with the same name as your ancestor. By identifying the regiment, you can tap into military-related records such as pensions with more confidence that it pertains to the right person.