Learn from Experts ›› Research Strategies ›› What Is Forensic Genealogy?

What Is Forensic Genealogy?

Who? What? When? Where? Are these the words of a genealogist researching his family tree or a forensic scientist solving a mystery? Maybe someone who is both!

Forensic genealogy has established itself as the modern approach to family research, for hobbyists, for the legal profession, and for law enforcement. Nicknamed "CSI Meets Roots", forensic genealogy does not replace conventional methods of research, it enhances them. Photographs, databases, and DNA, the three most important sources of genealogical information, can yield much more when they are examined using forensic techniques.

The photograph is Figure 1 is a good example of how a forensic genealogist might take a broader approach to researching a family mystery, compared with how a conventional genealogist might look at it. A friend sent it to me, explaining that it was a picture of her grandmother.

What is the best clue to the earliest date that this photograph could have been taken? Conventional genealogy might suggest the hat, but this would be incorrect. The woman's dress? Nope. Her hairstyle? No, not her hairstyle. 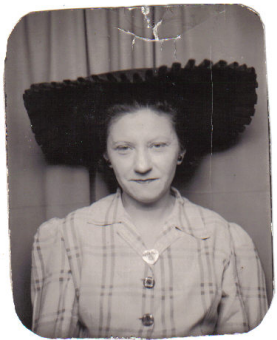 The curtain in the back and the shape of the photograph indicate it was taken in a photo booth. The earliest date the photo could have been taken was 1927 when the first photo booth was put into operation in New York City. The answer has nothing to do with the hat.

Today, everyone can be his own family detective - thanks to the ever-growing wealth of information on the internet that is available at a keystroke or on the click of a mouse. While conventional genealogy might be concerned with finding facts, forensic genealogy knits those facts into meaningful information.

For example, it is common for a genealogist to look up a birth date. If he is successful in finding it, he usually moves on to something else. But in extracting only that single birth date, the genealogist leaves behind thousands if not tens of thousands of similar records included in the same collection. The person whose birth record is of interest represents only one of many people who were born about the same time, in the same location, to parents who lived under similar economic, religious, and political conditions. A forensic genealogist recognizes that such a large database can be a rich source of information that can provide a glimpse into the lives of his ancestors, if only that information can be harvested from the data. 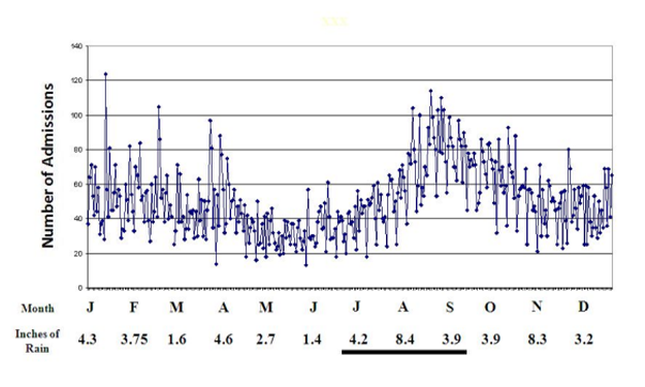 As I transcribed the 1851 admission register for Charity Hospital in New Orleans for our Orleans Parish website, I became curious about why the number of admissions per day varied so widely during the course of the year. Figure 2 is a plot of the daily admissions for that year. There were over 17,250 entries, 65% of which were Irish famine immigrants admitted suffering from some type of fever. Since most Irish immigrants were destitute and could not afford paid medical care, when they were sick they usually went to Charity Hospital where they could receive treatment for free.

The number of admissions varies up and down. In the late spring and early summer, the numbers go down, while in the late summer to early fall, the admissions swell, only to drop off during the winter months. The smooth increases and decreases in the numbers were caused by something that changed continuously throughout the year. They were reactions of the population to some phenomenon that caused people to get sick, especially the Irish.

A big hint to what was driving the number of admissions comes from the fact that the peak occurs at the end of the summer. This is usually the hottest and wettest part of the year in New Orleans-prime breeding conditions for mosquitoes carrying yellow fever.

The mosquito takes two to four weeks to breed in stagnant water, depending on the temperature. The hotter the weather, the less time required for the eggs to hatch. If there is a correlation between hospital admissions and the mosquito population, a change in the number of new patients should occur during the hottest part of the year, and lag high rainfalls on the average by three weeks.

Were the Irish involved with an activity that exposed them to mosquitoes?

The question can be answered by looking at Irish American history. New Orleans had a population of only 116,000 in 1850, yet during the next few years, the port was overwhelmed with a quarter of a million immigrants, over half of whom were Irish escaping the Great Famine. These destitute Irish offered a ready source of cheap labor, suitable for menial and often dangerous jobs. As pressure mounted on the city to drain more land to accommodate its dramatic increase in population, the fair-skinned Irish were put to work in the subtropical sun building railroads, canals, and streets, often standing knee-deep in stagnant pools of mosquito-infested water.

Anomalies can be very revealing. The smooth change in the number of admissions during 1851 is punctuated by sudden spikes appearing on January 13, February 19, March 26, and April 2. Comments in the records explained what was sending so many people to the hospital in a single day. The spikes do not represent Irish who were already in New Orleans, but rather Irish who were just arriving. Each spike represents the arrival of at least one plague ship carrying a typhus epidemic. The dates the spikes appear in the records are two days before each ship registered in the port. Apparently, as soon as a ship entered the mouth of the Mississippi River, the sick were offloaded and brought upriver to the hospital on smaller vessels, with the ship following behind as it made its way more slowly up the river channel. 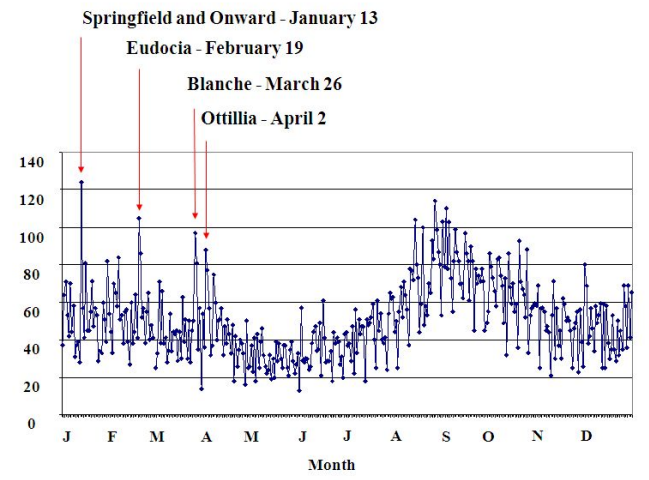 Conventional genealogy usually depends on finding a DNA match. If there is no match, DNA results may not be considered useful.

Not so. Forensic genealogy recognizes that DNA represents only one corner of the research triangle that also includes history and geography, and that even the lack of a match can be a significant clue to a family story. 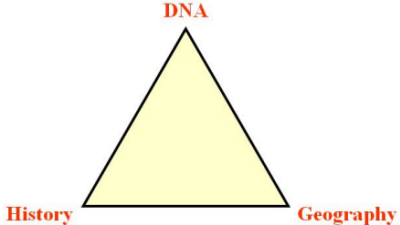 My own DNA experience is a good example this. My brother Terry Fitzpatrick was the first member of our Fitzpatrick DNA study in 2000. Although our project has now grown to over 150 participants, he still does not match any another Fitzpatrick study member.

My family research during the last 40 years did not establish a connection with any other Fitzpatricks through written documentation, nor revealed any information about the early life of my ancestor Peter Fitzpatrick, other than that he was born in January 1826 in County Louth, Ireland. I was disappointed at first that Terry had not found a DNA match that might lead to the deeper family history.

Although I was sure of our Irish ancestry, Terry came close to matching several Scottish names: Gibson, Moffett, and Dychus. Puzzled, and in search of more information, I wrote to Charlotte Braun, one of the administrators of the Scottish DNA project study that currently includes about 5,000 members. Her response was stunning - she found an exact match for Terry with a Scottish project member named Jim Logan. Unfortunately, Jim did not have any information about where in Scotland his family came from. This might have been another dead end for conventional genealogy.

Always keeping in mind the bigger picture, I studied the geography of Scottish surnames, since they were often associated with a specific location due to the Scottish Clan system. I queried a Scottish genealogist who told me that all the names Terry came close to matching originated in the Border Reiver area of Scotland, on the west coast near the border with England. Ironically, I had discovered that our family originated in Scotland in the distant past, because I had not found the match to other Fitzpatricks that I had hoped for. 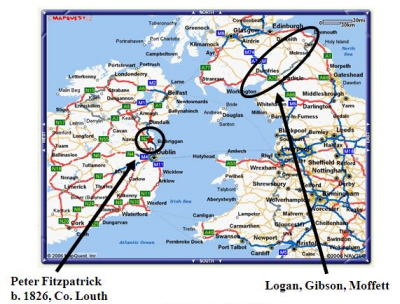 I was certain that our ancestor Peter Fitzpatrick came from Ireland, not Scotland. His place of birth had been recorded as County Louth in the Charity Hospital records described above, when he was admitted to the hospital with a contusion of the knee at 5 p.m. on Monday, April 6, 1857. His birth place was confirmed by his obituary over fifty years later in 1909. The questions now were how and why the Fitzpatrick/Logan family made its way from Scotland to Ireland.

The third corner of the triangle - History - offered possible answers. I consulted with the County Louth Historical Society, asking them if they were aware of any Scottish migrations into the area. The Society responded that there had been at least three Scottish movements into County Louth in the mid- to late 1700s. There was a group of Scottish mercenaries who were sent to man a fort near where I suspect my ancestor was born. There was also a group of skilled weavers who moved to the port city of Drogheda. A third wave of immigration occurred as Lowlanders from the Border Reiver area were swept out of Scotland and into Ireland by the Lowland Clearances beginning in 1760.

My first circuit of the DNA-Geography-History triangle has produced intriguing and unexpected insight into my deeper family history, based on the absence of a DNA match. To obtain more details of the rough sketch I now have of my family story, I plan to go to the top of the triangle again by DNA testing more people from County Louth, especially those with Scottish names, hoping it will lead me to a more complete geographical and historical picture of how my ancestors arrived in Ireland.

Most mysteries a forensic genealogist faces are not simple and require more than one tool and the use of those tools more than once. Discovering family history is often complicated. But the basic tools of forensic genealogy, photo analysis, database mining, and DNA analysis, can reveal fascinating family history not evident using conventional genealogical techniques.