How tall was an ancestor in a photo? Does that location still exist? Here are the tools to find out.

In spite of all modern technological advances, the closest thing we have to a time machine is a photograph. The photograph is our window to the past in two-dimensional form that allows us to witness a still glimpse of a moment in time. One day the brief glimpses of us during our lives will be observed in the same way. Henry Cartier-Bresson once said: "Photographers deal in things which are continually vanishing and when they have vanished there is no contrivance on earth which can make them come back again.

An old picture contains the faces of people we wish we could know better. For most, the faces and posture of the individuals are observed and then we move on to the next. The goal of a genealogist and/or historian is to understand the individuals in old photos and their stories. So what more can be derived from a single photo or a group of photos than just the face of a family member? In this article we'll explore a few ways to read between the pixels to learn more about the people and places in our old photos.

The first step when analyzing a photograph is to identify the individuals of interest. Often we'll see photos of individuals in their twenties and the next available image captures them at an age of forty or fifty years old. People change substantially over time, so you'll need to be reasonably certain you're looking at the person you think you are.

Do your best to identify, scars, moles and other features that are unique to an individual. A personal characteristic worth looking at when available, are an individual's ears. Ears are unique, and will maintain their general shape from adulthood through old age. The easiest comparison is whether the individuals in a collection of photos have the same earlobe - in the angle at which the earlobe connects to the head. A fascinating article about individual identification can be seen on Photorestorics where the examination of some photos is nicely detailed.

Volumes have been written about how you might determine the identity of individuals in photographs. As a first step, it's best to date the picture as well as possible. If you have a photo pre-dating 1910 or so, an excellent website to reference is PhotoTree. This website will help you to identify the age of a photo by the type of photo itself and by comparison with over 1,000 images in fifty categories. There are several other sites can help with dating photographs of all time periods. Once you're able to determine a general time period of a, you may then estimate the birth year of the individual by inspection and match them with family born during that time. An advanced dating technique which can reveal the day a particular photo was taken is outlined in the book Forensic Genealogy*, by Dr. Colleen Fitzpatrick (ISBN 0-9767160-0-3). Dr. Fitzpatrick's methods can be used to date photographs by evaluating all of the clues contained in them. Items such as products, building features and many, many other clues appear in photos that can be of help.

A determination of personal characteristics from only a photo can provide some interesting information. Determining an individual's height from an old photograph is something that might be of interest. Height might be used for instance, to help verify that an individual's stature is consistent with other photos or with family history in general. Finding the exact height of an individual from a photo can be a challenge but it can be done to a degree that is satisfying.

One somewhat reliable method of determining an individual's height from a standing, full-length photograph is identifying something in the picture of known size and using the measurement of that item as the standard of length. If you're in the possession of a coat worn in an old picture for instance, the length of the coat could be used as the standard of measure. Even better, you can use something that everyone has. Eyes. A typical full-grown adult if measured from center-of-pupil to center-of-pupil is approximately 2.5 inches with about a 6% deviation. Narrow-set eyes come in the range closer to 2.375 inches and wider-set eyes to the same difference up to 2.625 inches. A straight-on face shot is the best gauge. If the head is turned, the distance between the eyes as measured in the picture shrinks.

Both Fibonacci (Leonardo of Pisa) and Leonardo da Vinci observed anatomical patterns, noting proportional relationships between various parts of the body. For instance, our wingspan (arms extended on both sides) measured middle fingertip to middle fingertip is very close to our body height. If you have a torso picture with a full arm along with a good measuring standard such as a physical object of known size it can be possible to determine the approximate height of the individual. These can be fun to try but remember that our best efforts might not produce a 100% accurate measurement. A valuable observation is achieved when we can use this to strengthen the conclusion of an individual's identity. An interesting page on this subject and Fibonacci can be read at GoldenNumber.net 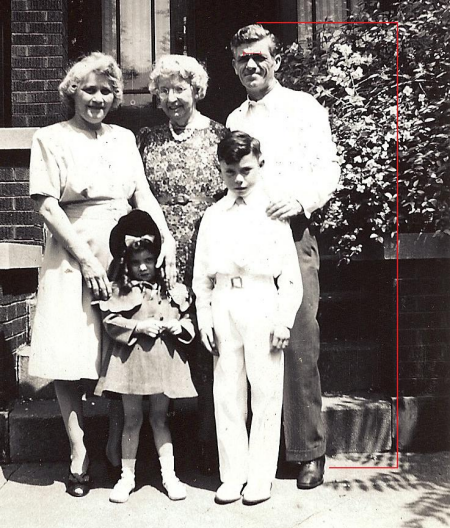 Photo of my known-to-be-short grandfather checks out that he was approximately 5'2" tall. Pupil measurement used to determine overall body height was used.

Other methods of determining height or stature of a person from a photograph employ the use of other objects. Someone standing near a brick wall for instance could be measured relative to the size of the bricks. (Standard height of house bricks or facing bricks in America are 2 1/4" inches. Bricks of 100 years ago could vary by up to about 1/8". Standard house bricks in the UK are 2 1/2" high)*. A very close guess of someone's height can be made from the standard size for things that appear in a picture with them. Bricks in this example are known in size going back 100 years or more. Using objects at varying distances from the camera as the individual you're measuring can be tricky. The distance from the camera your subject is in relation to the measurement standard (the bricks in this example) influence the accuracy of your results. Items closer to the camera will appear larger than identical items behind them. Where guesswork comes into play you'll lose accuracy but there's usually some way to identify the possible stature of a person from a photo.

When measuring items in photographs, the standard of measure is usually best in millimeters. To convert the photo dimensions into real-life size you'll use a bit of simple algebra. If I've measured a photo subject's pupil distance as 4 millimeters, to use as a standard for 2.5 inches I will write it like this: 4x=2.5 Four of my units equals 2.5 inches in the photo. The missing number (x) is what multiplied times 4 gives me 2.5. I'll divide 2.5 by 4 to determine how many inches per millimeter. In this case x=2.5/4 or 0.625. For each millimeter, I'm measuring 0.625 inches. NOTE: Pictures found on the Internet or on the computer MAY be scaled and skewed to fit the screen or the intended position on a web page. This is less common than it used to be but might be a possibility if you're viewing an older website. An original copy of a photograph is the best source. If you have the luxury of examining a photograph containing items of known size that are casting a measurable shadow and your subjects are also casting a measurable shadow it may be possible to estimate height using this. Measure the ratio of the shadow cast by the object of known size, and divide that length by the actual height. Apply this ratio to the length of the individual's shadow for a determination of that person's height.

Location Of A Photo Or Property

The location of a photograph can tell a lot. Photos taken outdoors can reveal the appearance of a home or neighborhood as it once appeared. If you've ever wondered if the home of an ancestor still exists, your old photos could provide enough information to verify whether it does or not. 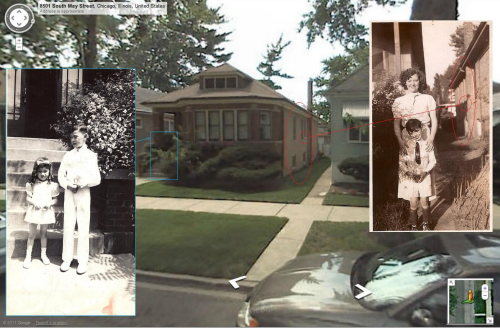 From birth, census and newspaper records I know the address where my ancestors lived during the time this photograph was taken. By entering this address in Google I was able to view the satellite image taken of the neighborhood. As I continue clicking the location of interest the map the image zooms in, eventually to street-level including an image of the houses on the street as viewed from a car.

Google provides a pointer in the screen that will point in the general direction of the home and then it's up to me to identify it. In this picture from the 1930s I have a good look at the position of the front steps on the left side of the house along with the brick structure alongside the steps. From the Google image I can confirm the same layout of the porch complete with the brick sides and number of steps. By comparing this modern day picture with several old photos in my possession, I can determine this house is the same house and structure shown by Google on the street view image.

Inset to the right of the Google image of the house is a photo of two relatives taken in an unknown location behind a house. There's only a brick wall in the background but their house at this time was indeed a brick house. Notice my photograph shows them standing next to a house with three first floor windows and a chimney looking towards the front. The nearest window to the chimney must be a bathroom or kitchen window, as it's a different size from the other two. In the Google map photo I can see the three windows (the furthest one is the smallest) and a chimney. The lower windows in both pictures match up, and it's almost confirmed that this photo of my great-grandmother was taken at her home. I have other photos with different perspectives of the back and sides of this house which also back this up. In addition, the home across the street in my old photo still exists and matches the profile of the home across the street if the Google street view is rotated in that direction.

There is much to learn from old photographs. Old photos allow us to peer into the past, and remain our only visual clue as to what life was like for our families. One of the most enlightening activities in my genealogy work involves working with photos to extract as much information as I can from them.