Curb Your Enthusiasm and Grow as a Genealogist

We're all enthusiasm and energy when we begin in genealogy. We want it all, and all at once. And at first, we can get it. Records are more likely to survive, sometimes even at home, when we're working on the generations still close to living memory.

Enthusiasm is indispensable - where would any of us be without it? - but it can only carry us so far, like a wave washing up on shore. Sooner or later the shore gets steeper.

I used to research all my lines all the time. What do I have to show for it? Some information, some of which is cited . . . and a drawer of unfiled records, another of Civil War pension files, and another half-full of U.S. census agriculture schedules - not to mention the notes that I either can't find, can't read, or can't understand. 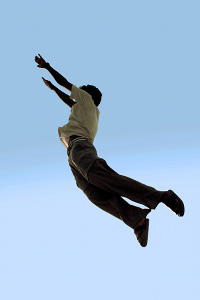 Genealogy by the Numbers

There's a reason for this. Genealogy is bigger than we think. Of course every "solved" ancestor leads to two new research questions - "Who was the father?" and "Who was the mother?" But even though both my father and my mother's mother taught math, at first I just didn't feel the geometric progression of ancestors as I moved back through the generations:

The very human process by which we came to be has almost inhuman consequences for our research. In order to avoid burnout and despair, we need to spice our enthusiasm with cooler virtues: focus, persistence, and an analytical eye.

Sheer quantity dictates that we focus on just a few family lines at a time. Research quality also pulls us in the same direction.

Even at the earliest and most straightforward level, when research may consist largely of a series of lookups, we can have trouble keeping track. A well-maintained filing system (physical or virtual) only goes so far. We can accomplish more when we don't have to stop and think about where Jan Janssen and Jen Johnson belong, or whether they're the same person.

Later on a single individual may pose daunting problems: too many John Smiths, or too few helpful FindAGrave photos. Keeping our wits about us becomes even more difficult. We need to stick with a few chosen projects at a time.

Here lies a paradox. In order to determine great-great grandma's parents, we have to focus. But we will also need to study her siblings and children and friends (their records may tell about her), not to mention her husband(s). Where's our focus now?

Most projects have built-in pause points while we wait for distant records to arrive or for a road trip to key repositories. So it makes sense to have more than one research project on the front burner, as long as we keep them under control.

The everybody-all-at-once approach rarely allows us to go as deep as we need to. I gathered multiple census records on my Thrall relatives, but Aaron Thrall's family never quite made sense until I focused on them and stuck with them. Eventually I found a deed in the county just west of where he lived that enumerated his children. They inherited land there after he died in 1847.

Later I found a confusing deed in the county to the east - a deed of partition that named known people (a child, a grandchild, an in-law) along with a bunch of complete strangers. That led me to the underlying partition case in court, and then to the local library, which held the loose papers and scraps showing how the terms of partition were worked out.

There, amid a dizzying array of multiple-digit fractions, the attorneys and judges discussed the relationships and computed the shares due to people close to the family of whom I had never heard, like Aaron's oldest daughter's widowed husband's second wife. (Before, I had no idea what became of this daughter.)

In my enthusiastic census-collecting years I had no inkling of these people. To find them required persistence and focus. Getting them written up will require more of the same!

Most of us bring another asset to genealogy that also eventually needs to be harnessed and rethought. Often our best-known lines are like well-worn beads on a favorite necklace. As a result it can be really hard to get our minds around the possibility that the stories or the lineage could be questioned, or even wrong.

Frequently retold family stories are not necessarily true. Research is all about confronting our sweet memories with original documents created at the time by eyewitnesses that say different. The highly-regarded documents are fallible too; they don't always win. But our minds have to make room for that possibility, so that we can analyze the individual records and then correlate (compare and contrast) them to discern the truth.

Genealogists who work on other people's families (for fun or for pay) become accustomed to seeing them as patterns and problems - not semi-sacred reminiscences, but assertions that could be mistaken. Learning that our family is not exempt from selective memory and myth-making will make us better genealogists -- more focused, more persistent, and more understanding, no matter who we're looking for.