Getting The Most When Hiring A Professional Genealogist

Why would anyone who loves research hire a genealogist to help find their own family? Most of us would as soon hire someone to eat our food for us!

Sometimes we lack the time, proximity, skills, or physical abilities to do significant parts of our research (beyond just a lookup). This is neither a defeat nor a disaster. By following a few common-sense rules, we can hire a compatible professional genealogist and emerge from the process smiling. (I speak as someone who has been on both sides of the deal.) Following these rules may even make the hiring part unnecessary!

Start With What You Really Know

It's never a mistake to review our work first. Get a head start and ask the question that the professional will ask anyway: What do you know? Whatever it is, that's the foundation of the search. Build on it by posing a new question or hypothesis. Don't pile theories one on top of the other.

I wanted to identify the father of Aaron Thrall's wife Cynthia. At least, I thought I did. "Who was Cynthia's father?" seemed like a fine question, until I realized that Aaron had died before 1850 and his probate had burned up in a courthouse fire. I was going to have trouble just proving that Cynthia had been his wife! Why start looking for her father if I wasn't even certain that she was Aaron's wife? 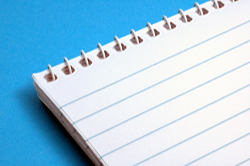 In cases like this, we have to step away from the ancestor. I had to pose some hard questions. Did I really know who Cynthia was? Did I have an original record showing her in a particular place at a particular time? The answers were "no" and "maybe." This was not a suitable foundation for research. I had to start with what I knew, which was Aaron.

A professional can start work anywhere. But if this first step is omitted, then the professional may find a lot of information . . . about someone else's ancestor!

Be Ready For Surprises

Don't decide ahead of time what the research results are going to be. Those who already know the answer don't need professional help (at least, not this kind).

I once sent a client a report with unexpected negative results, plus other findings that contradicted his expectations. I've always admired his response: "I guess I didn't know as much as I thought I did."

It's OK to have reason to believe that Joe was Harry's father, or that great-grandmother was a Cherokee. If so, give the reason. This shows we know what a hypothesis is -- and that research may prove it, disprove it, or leave things hanging.

Focus On The Problem, Not On One Solution

When my car acts up, I tell the mechanic about the funny noise it's making. I don't tell him that there's something wrong with the fuel pump.

For the same reason, when I want to know Fred's father and I know Fred was born in Michigan about 1830, I don't ask for his birth certificate. It does not exist and never did. Michigan didn't keep birth certificates then. What I really want is evidence of Fred's parents, whatever form that may take.

If we focus on the question and not the supposed location of the answer, interesting things can turn up. I have found what amounted to a death record from Dakota Territory in a pair of New York property deeds. Focusing on the question keeps us open to possibilities.

In writing up a brief account of what we know, it may not seem natural to say "John Jones" rather than "father," but it's a kindness to our descendants, not to mention any hired researcher. I came up against this when I realized that I couldn't label pictures of my grandmother as "Grandma," because she was my children's great-grandmother!

In the same vein, don't overwork pronouns. Consider this passage: "Joe's father was John. He had two wives and eleven children." Who is "he"? Since genealogy involves referring to a lot of different people in quick succession, there are many possibilities for misunderstanding. Using a person's name too often is better than not using it enough.

Hope For A Reprieve

Reviewing our research may sound like cleaning up the house before the cleaning lady comes. But that's not always a bad idea, even though it strikes some people funny.

In both cases, we may discover that we don't need the help we were going to ask for. We may find a fact that means more now than it did when we found it. We may realize that we never visited that repository that we had intended to. New information may have come online since we last kicked at our brick wall.

At worst, we've clarified our question, summarized what we know, and confirmed that we need help. Now what?

Most people who do genealogy are people who do it just for the love of it. As amateurs, we give and receive help from relatives and friends and newly discovered relatives, free of charge, according to our time and temperament. This is great, but it doesn't always get the job done.

A professional is a different animal. Make sure there's a clear understanding (be it a formal contract or an email) of what exactly is being paid for, and when. More on that in a minute; the point here is that money will change hands. Get used to it. Maybe "information wants to be free," but it is not free if we don't know where to find it, how to recognize it, or how to use it once found.

Shop Around And Match Styles

For most research questions, we have a choice. There are numerous places to find qualified researchers, including the Association of Professional Genealogists (APG) and firms such as ProGenealogists. You might notice that some genealogists have initials after their name, such as "CG" or "AG." The two main credentialing organizations are the Board for the Certification of Genealogists (BCG) and the International Commission for the Accreditation of Genealogists (ICAPGen). Both BCG and ICAPGen make their lists of credentialed researchers available on their websites. Researcher lists can also be found at state and local genealogy or history organizations, libraries, and archives.

Affiliation with such groups signifies seriousness, not infallibility. In any case, prefer someone who is familiar with the local records and who shows signs of being responsive, systematic, and persevering. It is OK to shop around and to change researchers after completing business with one. If you do, be certain to share the earlier findings with your new researcher.

As to the work itself, some professionals are happy to chat on the phone about old family stories. Others would prefer to be left in peace to get on with the job they were hired to do. Professional and client don't need to be soulmates, but it helps to be near the same wavelength.

We'd all like to know how long it will take to find five-year-old Melinda's great-grandfather. And no honest researcher can tell us. Anyone who guarantees "ancestors or your money back" is pulling our leg -- or our wallet.

Sometimes the needed records aren't there or more work is needed -- and that's what the professional has to tell us. When we hire someone, we're paying for expertise diligently applied, not for specific results.

So if we can't insist on success, what can we insist on? A timely and understandable report. Normally that should include the starting-point information, a clear statement of the research question, an executive summary of the findings, a list of where the researcher looked and how, a detailed account of the findings both positive and negative (with citations), copies of key documents, and suggestions for follow-up research.