Learn from Experts ›› Research Strategies ›› How To Handle Conflicting Evidence: A Six-Step Program

How To Handle Conflicting Evidence: A Six-Step Program

Conflicting evidence is a bit like hearing Grandma tell a lie. Or did she just tell the truth, and everything we thought we knew to the contrary was the lie? Either way, it's a test of our commitment to genealogy. Here's how to pass the test.

Step One: Notice It

Suppose the 1850 census says that an ancestor was born in Indiana, but 1860 says Iowa and 1870 says Wisconsin. Don't fall into the habit of saying (or thinking) that she was born in Indiana just because that was the first record we saw, or because it's what we'd always been told. There's a conflict here, a contradiction. We have to recognize it before we can deal with it.

Contradictions are to genealogists what dust bunnies are to house cleaners. They may annoy us but they are also an important part of our life. And in both cases, to sweep them under the rug would betray our calling.

But they are more -- dust bunnies with attitude! -- because they force us to dig deeper than we otherwise would. When the same man called his mother "Edith Pedin" in 1890, "Mary Alberson" in 1919, and "Mary Peaden" in 1953, it was not just a typo. It was a clue that something out of the ordinary was going on. 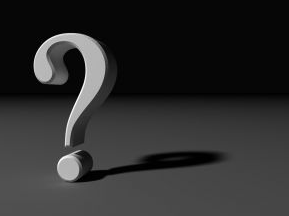 Conflict creates uncertainty; we need to accept that uncertainty, provisionally. Indecision can be a virtue. We may suspect that some of the information is bogus and the rest can be explained away. Make a note of those thoughts but don't wipe the doubtful elements off the books without searching more. The past doesn't leave us enough evidence that we can afford to toss away the inconvenient pieces.

Step Two: Make Sure It Matters

Don't take a nuclear weapon to that dust bunny! Make sure the conflict is significant with regard to our specific research question. For example, it may not matter whether Elias was born on December 1 or December 3. But it may matter whether he was born in 1869 or 1871 if we're trying to figure out whether he could be the Elias who appeared in the 1870 census.

The best cure for conflict (in genealogy, anyway) is to look for more. Check out the likely places to find more evidence on the point. If we don't have experience in the county or state, then it's best to pause, back up a step, and first get a sense of the records landscape by looking at the relevant parts of:

Elizabeth Shown Mills gives excellent advice regarding analysis.  Analyze each piece of evidence for its general level of credibility. Does it come from an original record, or an abstract or transcription of the original record, or from an authored article or book? Does it provide eyewitness or second-hand information, or can we tell? Does it directly answer our question, just offer a clue, or tell us nothing when we expected something? Do we know the informant? Did she have a motive to shade the truth? And more.

Answers to these questions suggest how much weight we should give to each piece of information, but no piece of information is undisputed trumps. Anything can be wrong, even first-hand information in an original source. In other words, we can't find the right answer by analyzing just one source. Accuracy is most likely to happen when independent sources corroborate one another.

Thomas W. Jones suggests organizing and then reorganizing the pieces of information. Try using tables, charts, lists, timelines, maps, diagrams, sticky notes - anything that might offer a useful new perspective. Don't expect to find the one ideal way of organizing them; there is no such thing. The point is to look at it from all different angles, in different combinations, in order to find patterns that weren't obvious at first.

Having looked in all the right places, marshal the forces on each side -- or all sides! Are there pieces that are uncorroborated? Is one side mostly low-credibility? Can some pieces of evidence be explained away?

This step is not optional, although many of us - myself included -- postpone it to the point of no return.

Our genealogy database programs are wonderful memory aids, and they help us share with enthusiastic relatives. But they are not self-explanatory. Just choosing one side of a conflict and entering that choice into a database won't help those who come after us.

Even when we have done steps one through five and the case seems clear in our own mind, there is no proof unless it's explained clearly in writing. How else can anyone figure out what we did? Few of us have a "genealogy executor" who will be able and willing to put her own life on hold in order to decode our scrawly notes, re-create our reasoning, write it down, and get it critiqued and published.

Besides, the act of writing often shows us where we didn't search, analyze, correlate, or reason carefully enough. Once we think the written work looks good, it's time to show it to others and see if it convinces them. Then find an editor! Without this step the contradiction is not really resolved.

Our friends and colleagues who edit publications will want to publish our resolution. More importantly, our descendants and relatives and future researchers deserve to know why we reached the conclusion we did.