Learn from Experts ›› Research Strategies ›› Indecision as a Genealogical Virtue

Indecision as a Genealogical Virtue

Don't fall in love with the first record you see. Or any of them, really.

I knew someone who thought his ancestor had been born in Alabama -- but two other census records for the same person gave Tennessee and Indiana. Another latched onto the first of many spelling variants she saw.

The research road leads from ignorance to knowledge. But that trip takes time. During that time, we need to be able to keep our minds open and not get too attached to any particular route.

Sometimes this lesson is pretty obvious. In 1898 Blanche DeHoff married George Chilcote in Chicago. In 1900 Blanche was living there with her husband Edward Chilcote. The confusion continued in city directory listings in the following years. Was either of these names correct? Neither? Both? Or were there really two men?

When we're just beginning research on these people, we are not called upon decide any of these questions right away. But we do have to keep all the possibilities in mind, so as not to miss (or dismiss!) additional evidence.

Sometimes it's not obvious until the research is well along. Another project started with the assertion -- sourced to a local history "mug book" -- that Wilson Abel Fairbanks grew up in Terre Haute, Indiana, leaving there as a young man around the time of the Gold Rush. No amount of searching produced an area family for the man, or any trace of him. After a while it seemed appropriate to try a different tack (that is, make a different provisional assumption). I proceeded from the stated origin of his wife, which was Iowa. It soon turned out that Mr. Fairbanks was in Iowa in 1850; the rest of the story was pretty much as the mug book told it. I have no idea how Terre Haute got in there. 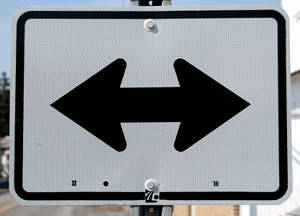 In the case of Mrs. Levi Goodrich, a pioneer of Kane County, Illinois, her cemetery stone recorded her death in March 1840. Eerily, she appeared in the 1840 census - date of record, 1 June 1840. Even more eerily, when her estate entered probate, claims were filed for treating her throughout 1840 and into 1841. In order to resolve this confusion, we need to evaluate and compare all the contradictory evidence and keep it in mind while looking for more -- not rush to judgment.

Find Your Assumptions and Make Them Relax

In a blog post earlier this year, librarian Dawne Slater-Putt of The Genealogy Center at the Allen County Public Library recounted a research story along these lines. A patron was seeking a young woman. He believed that she had been born in 1931 in Arkansas, had died in a Fort Wayne house fire at age 16, and was buried there in Lindenwood Cemetery. But her name did not appear in the Center's cemetery abstracts or any other records consulted.

Finally Slater-Putt began searching the cemetery abstracts by first name only, and scrolled through the list of results, "looking for young women who died in their teens in the late 1940s. One jumped out - an Ethel May who died at the age of 18 in 1949 and was born in Arkansas." (My italics.) Newspaper records showed that she was indeed the person being sought, recently married with a new surname.

What might have become a "brick wall" was built of prematurely asserted facts or assumptions. Note the strategy: Only by relaxing some of these assumptions - the surname, the date of death, and the exact age at death - was Slater-Putt able to discover the truth.

Try to Disprove Your Best Idea

It's human nature to have ideas, and to seek patterns in data where none may exist. We don't need to suppress our tendency to come up with hypotheses, but we can't let them control our research lives. Elizabeth Shown Mills describes hypotheses as notions we accept "only as possibilities to be further tested and soundly proved before we can validly assert an opinion."

Trying to disprove your favored hypothesis is a good way to test it and learn more. There is something freeing about that exercise, and sometimes it leads to proving the favored hypothesis after all! F. Warren Bittner described this experience in the September 2010 issue of the National Genealogical Society Quarterly, describing his search through all kinds of conflicting and mystifying evidence for the German origins of Dora Lühr. (NOTE: The National Genealogical Society Quarterly is available online for NGS members and in libraries with a good genealogy collection.)

In Lewis Carroll's Through the Looking-Glass, the White Queen told Alice, "Sometimes I've believed as many as six impossible things before breakfast." We don't have to do anything as hard as that. The more we can suspend judgment, embrace uncertainty, and cultivate ambiguity -- whatever you want to call it -- the more likely we will not mislead ourselves into a research dead end.