Solving the Paradox of Research Planning

Genealogy starts simple for most of us. We interview relatives, we look up dates in known records, we cruise random indexes in libraries looking for our surnames. As we get further into the past, memories dim, records disappear, and those that do appear begin to contradict each other. Now we need to start planning what to do next.

But how can we possibly do that, when by definition research is a raid on the unknown? Here are eight ways to resolve the paradox.

Prepare to Be Surprised

The paradox is partly true: a detailed research plan of many pages won't work, because the second step often depends on what information the first step brings in. That's why the Board for the Certification of Genealogists asks an applicant to submit a research plan of "one page or less" describing "the first steps for continuing research" based on a particular document. Anything more would likely be wasted effort.

I once started looking for a man's mother. He named her in his 1890 marriage application. Case closed, right? Then I discovered that he had named a different woman as his mother at the time of his second marriage, and named yet another when he applied for Social Security!

Most of our preparation involves knowing local records and local laws; working from the known to the unknown; asking specific questions; tracking our progress; and being ready for the inevitable surprises.

Know the Records and the Laws

There's no point in looking for a birth record in Illinois in 1866 or a marriage record in South Carolina in 1909, because no such records were ever created. Save time by checking a standard reference, such as Ancestry's Red Book.

Old laws are less mysterious than they once were, now that many are on line. It's amazing how much clearer the records can become when we've seen the legal basis for their existence. It's like being backstage at a theater production.

Sometimes that visit backstage shows us secrets the audience out front doesn't know. For instance, in 1838 the Indiana legislature decreed that "No clerk shall grant a marriage license to any person except in the county where the female resides, and has resided for the space of one month immediately preceding such application..." In other words, whether a post-1838 Indiana marriage record names the bride's residence or not, she was very likely local.

Work From the Known to the Unknown

This can get tricky but the main point is clear: Start with an original record showing a known ancestor in a specific place and time. Work from there by searching at nearby times and places. Unless perhaps the ancestor was Ulysses Grondyke Van Buren, don't just start plugging the name into search engines and databases. That is indeed a research plan, and a common one, but it is usually inefficient for two reasons. Most of the hits will be wrong; and, by the time we find that out, we will have accumulated information about faraway people not related to us! An investigation that starts close to the known person will, if nothing else, expand our knowledge of that person - knowledge that we may need later on to understand and identify them when they move. 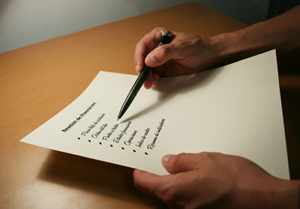 It takes judgment and experience to plot a course once we have identified a reasonable candidate to be (say) a parent. Especially in hard cases, it may not be clear when to switch focus from the initially known person to the hypothetical parent. But the general rule stands: don't go fishing until we have a good idea where the fish are.

Most of us would like to know as much as possible about our ancestors. But we will learn more by not asking for that. "What do you know about Grandpa and Grandma" doesn't result in good answers; it's too vague. Ask a specific question, like "When did they get married?" or "Who were their siblings?" or even "How did they ever meet?" Such questions bear more and better fruit than just asking for everything.

This may sound like another paradox, but it's not. When we start by asking for everything, we naturally fall into the bad research habit of only looking for a name. Not only does that lead to finding wrong people with the same name, it also leads us to overlook records that are not indexed by name (such as many tax lists and newspapers) or records that don't name the person of interest at all (such as newspaper stories that name a grandmother and grandson, sufficient to identify the mother but never naming her - yes, I've had one.)

Track What We Do

Tracking is the most basic form of citing sources. It helps us understand the source - its strong points and weak points, and whether it is an original source or a derivative that copies or indexes an original.

Tracking also helps when we have to find our way back to the source again -- think Hansel and Gretel's breadcrumbs. It's not that we always forget, or make mistakes. Often we need to return because we have learned more. "Marvin Monroe born 1926" means something different once we discover a Monroe marriage in 1925, and having learned that we may need to go back and compare the information in the two records.

A third reason to track and cite sources is reputation. Doing so shows potential skeptics -- family, friends, and fellow researchers -- that we're serious, and that they should give our work a hearing even if the results surprise them or make them uncomfortable.

Harder than tracking, but even more important: Record the sources that told us nothing. There's a hierarchy here. It's nice to know that we went to the courthouse; it's nicer to know that we looked in Circuit Court Order Books A, B, and C; and it's best of all to know who we were searching for in them, and how we searched (because a year from now we will have learned more and not necessarily recall exactly what we knew back then). I have never heard any researchers bemoan that they had over-documented their past work!

With time and experience, we learn when it makes sense to approach a new set of records, or to revisit them in a different way. For instance, property deeds and mortgages may not always be the best place to start, but once we've learned what we can from vital records and county histories, it's usually time to take them on. We can get into a rut, looking first at one kind of record and then another in every case, regardless of the circumstances. Seasoned researchers consider which records are most likely to advance a particular case and proceed accordingly.

Try not to conduct too much research before stopping to absorb it all. In genealogy even more than real life, first impressions can deceive. There is no substitute for reviewing the work of the day and writing it up. If nothing else, that leads to a better plan for the next day.