The dead have been cleared from the smoky battlefield and are on the stripping line at the Graves Registration Service (GRS) clearing station. The dead quietly wait their turn for processing. Their voices can no longer tell the stories of who they were, but usually their personal effects will speak for them.

When a soldier was located after death, every attempt at identification took place. The process began at the stripping line where troops initially removed explosives and equipment. Another soldier took these items to an ammo and equipment area so they could be reissued.

Next, medical sergeants stepped in with a clerk. The sergeants cut pockets and other pieces of clothing to locate identification tags and personal effects. Typically these men worked without gloves in destroyed and decomposed remains. If identification tags could not be recovered, then a soldier's comrades were consulted, if they were available, to help identify the soldier.

Other identifying items included rings, insignia, pay records, letters and photographs that may have been carried by the soldier. In some cases, dental records and laundry marks were used. Upon first issue of clothing in the Army, a soldier would put a mark in his clothing to show that it was his. However, when serving on the front lines, when a soldier entered a wash-up station, he may or may not have had his duffle bag with his clothing available. In those cases, the men stripped, left their clothing, went into the wash station on one end, came out the other and were given new clothes. Because clothes were reissued over and over, there may have been several different laundry marks. This would have made it very difficult to positively identify the Soldier Dead if he did not have identification tags on his person. 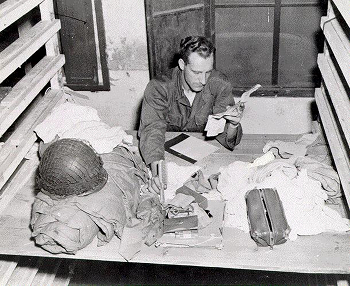 An Individual Deceased Personnel File (IDPF) was created for every Soldier Dead upon receipt of remains by the GRS. While every file is somewhat different, it generally contained the following forms.

Report of Burial
A Report of Burial contained the soldier's name, serial number, rank, date of death, place of death, a copy of his identification tag is stamped onto the form using an addressograph machine. The report also contained the grave location of the soldier along with the man buried on either side of him. At the time the report was created, if the emergency contact information was available it was added to the report. A list of personal effects were included if any were found on the body.

If Deceased Unidentified
If the deceased was unable to be identified then a form that allowed for fingerprinting and dental records was used and inserted into the Soldier Dead file. This form also contained space to list a physical description and information on personal effects or other things that might help identify the deceased.

Report of Death
The Report of Death was a form for the Adjutant General's Office that listed name, rank, serial number, branch of service, date of birth and death, date of active entry in service, where he was killed, emergency contact and beneficiary information.

Request for Disposition of Remains
This form was sent to the next of kin to complete so the government would know what to do with the remains. The choices were:

Disinterment Directive
This form contains the basic identifying information on the Soldier Dead: Name, rank, serial number, date of death, cemetery name and location of grave, name and address of next of kin, condition of remains, date disinterred and remains prepared.

Miscellaneous
Most IDPFs contain letters from family members to the Quartermaster asking questions about personal effects or the location of their soldier. In many cases these letters are handwritten, not typed, so researchers get a copy of their ancestor's handwriting.

When a Soldier Dead was identified, a mattress cover which was used as a shroud was prepared for him by painting his name, rank, and serial number on it. Remains were arranged and closed in the shroud with one identification tag inserted into deceased's mouth. The other identification tag was attached to the cross on the grave.

Not all Soldier Dead were identified because of the condition of the body when it was received by the GRS. Unknown Soldier Dead were assigned an X number since there was no serial number by which to identify them. This was placed on reports which were duplicated. Fingerprints were taken and put into the Report of Death. A metallic tag with the X number was made and inserted into the deceased's mouth. A second one was attached to the cross on the grave. The duplicate copy of records was placed in a bottle and buried with Soldier. This allowed for possible identification at a later time. Unknown remains were placed into a mattress cover and the X number was painted on the bag.

What wasn't told to the family was exactly how their soldier died. They were not told about the condition of the body at death or upon locating the remains. They were not told that there were no personal effects on the body or why. This made it difficult for the family who not only was grieving for their soldier but could not understand why no effects were coming back.

After the war ended, the U.S. government began working with overseas officials to secure the authorization to use ports, disinter remains in private cemeteries, and to use rail and waterways to transport remains to major sea ports. Once this was in place, the government was able to contact families of the Soldier Dead to inquire about their wishes for the final burial.

The government began notifying families of the location of their Soldier Dead beginning in late 1946 and continuing for several years afterward. It is possible a family's soldier had been buried overseas for two or more years before the family was notified of the location.

The disinterment and repatriation process took a couple years or more after the war ended. This was due in part to a shortage of materials for cases for the coffins and a shortage of metal for the coffins themselves.  The coffins were "made of steel with bronze finish" and "were seamless, a cover set on a rubber gasket is sealed with thirty-two lugs." When a Soldier Dead was placed in these coffins, they were sealed and placed into a wooden shipping case. The shipping case had the name, rank, and serial number of the soldier inscribed on the case.

Soldier Dead from World War II were returned home or reburied in a permanent American Military Cemetery overseas from late 1947 through 1951. Today, in 2013, Missing in Action remains are still being sought and located by our government all over the world. The GRS men then and today have a job many of us would prefer not to have, yet they do it with pride. They do it to ensure our Soldier Dead receive the respect they deserve for giving the ultimate sacrifice. Death for their country. We owe it to both our Soldier Dead and GRS men and women to remember their stories. Will you join me in writing them?

NARA Record Group 92: Records of the Office of the Quartermaster General [OQMG]