It's dawn on December 7, 1941. Airplanes can be seen on the horizon, but why is the Navy practicing this early? Suddenly I hear gunshots. Alarms sound. Men run for battle stations. Bombs fall from the sky and explode with a thunderous noise. The earth shakes. Fireballs erupt in the clear morning sky. The scene is one of horror and utter destruction. Pearl Harbor is being attacked!

In that moment, the world as our ancestors knew it was never the same.

How many times have you researched the stories of your male military ancestors? How many photographs have you seen? How many stories have you listened to over the course of your life? Have you stopped to consider that women also served during World War II? Stateside, overseas, and on the home front? We often become so immersed in researching and writing the stories of our male military ancestors that we forget about the women. Yet the women played a role just as important as the men and they kept the home fires burning.

Times had changed and women were now involved in more than primarily working in the home. No longer were their jobs to raise the children, take care of the home and the husband. It was now time to go out into the workforce and learn new skills. Perhaps your ancestor took a job as a secretary or telephone operator. Have you asked if she worked in a factory producing airplanes or war munitions? Did you ever consider she may have joined the Red Cross or Women's Army Corp, or SPARS who were the Women in the U.S. Coast Guard? Was she a nurse? Women took on important roles during the 1940s to help win the war. Let's explore some of these roles.

Women on the home front filled many different roles during the war. They were home to raise the children, handle the household, and take care of their husbands or parents. They were educated in high school and some went to college. They more often took jobs outside the house as secretaries, switchboard operators, shop girls, nurses, and factory workers.

Everyone has heard of Rosie the Riveter. She is the embodiment of a World War II female. She represented not only those who worked in the factories but also those who kept the family together. Women could and did do everything. They were just as powerful as the men they sent off to fight.

Women however, were not allowed to join the armed forces and take up arms. This avenue in 1941 was off limits to them, which is the opposite of today. Instead of taking up arms, these women joined volunteer organizations within the armed forces. They were trained in areas they may not have otherwise had the opportunity to learn and  this opened new doors for them after the war.

Women in the Armed Forces 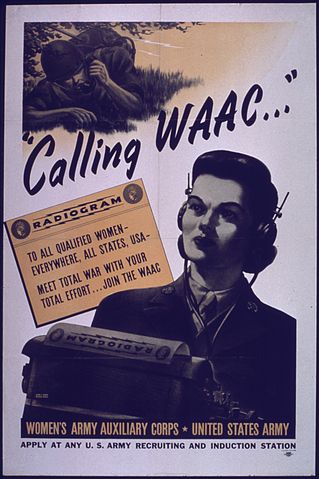 Can you imagine being a woman in her early to mid-20's that was able to join the military and go overseas to serve her country? Why did she do it? Adventure? To support the war effort? To help heal her heart after the death of a father, brother, fiancé or husband? To travel to foreign lands? Women served for all of these reasons and many more.

When the U.S. joined the war at the end of 1941, the armed forces were beginning programs for volunteer female forces. In the Army it was originally called the Women's Army Auxiliary Corps (WAAC) and then by the end of 1943, the Auxiliary was dropped and it was simply WAC as it was officially incorporated into the Army. The WACs now had the same rights and benefits of enlistment as men.

The Navy had the Women Accepted for Volunteer Emergency Service (WAVES). Today's Air Force was part of the Army in those days and they had the Women Airforce Service Pilots (WASP). Women in the U.S. Coast Guard were called SPARS. The Marine Corp had a branch of female volunteers called "Marinettes," the Marine Corp Women's Reserve. There were also nurses in the armed forces and Red Cross workers.

The purpose of these volunteer organizations was to fill every possible job that could be filled to release a man for duty. If a woman could be trained to handle a job as a parachute rigger, nurse, recruiter, weather person, office worker, dental assistant, munitions worker, and ferrying planes, she could replace a man who could be sent to the front to fight.

Women who joined these volunteer organizations were sent to basic training camps where they learned to march and drill, handled KP duty, learned the use of gas masks and other equipment. After basic training, some were sent for additional training where they were specially trained in certain areas. These included medical, dental, machinery, or other areas before being given an official assignment.

After training was over, they were shipped off to duty elsewhere in the U.S. where they were needed. Some women did go overseas. In those theatres of war, they served as nurses, office assistants, parachute riggers, weather women, and any other job that needed to be filled.

Not only did they work, but they also had the opportunity to travel to nearby areas while on furlough. One WAC I know began her overseas duty in Naples, Italy. Within a month she was sent to Cairo, Egypt where she remained for the duration of the war. Yet in that year or so she was in Egypt, she visited Cypress, Palestine, Jerusalem, and other nearby places both as part of furlough and her usual duty. War was hell, but there were some peaceful moments also. It was these moments and the thoughts of their families at home that kept them going.

Women filled a big role during World War II. Their lives should not be overlooked as we fill in the gaps of our male ancestors. Their roles both at home and at war were just as important as the men who fought on the front lines.

Talk to your families about the roles women played during this time. Ask to see photographs, documents, and ephemera from this time period. If your female ancestor served in any of the armed forces investigate her history. Check the official military histories for that unit, see if there are specific museums or libraries with dedicated collections for this branch of the armed forces for women. Find out where they spent their furloughs and rest days. Were they at a U.S.O. club, Red Cross club? Traveling to a new part of the world?

Finally, write her story. Don't stop at the men in your family who fought. Writer HER story. Look at how her choices and the changes that she had to make because of the times affected who you are today. If you are a woman, what choices do you have today because of her role during that time? Always remember the women and their service. Honor our female ancestors with your stories.

Marine Corp Women's Reserve: Information about the women who served in the Marine Corp during World War II

The Minerva Center: Non-profit foundation that supports scholarly research and study of women in the military both past and present

SPARS - Women in the U.S. Coast Guard: Articles and history about the SPARS during WWII and beyond