Learn from Experts ›› Records Archives ›› The Good News About Taxes: Finding And Using Tax Records In Your Genealogical Research

The Good News About Taxes: Finding And Using Tax Records In Your Genealogical Research

Taxes go so far back that we read about them in the Bible. It would seem there could be nothing good coming from taxes--but not so! Tax records are the best kept secret when it comes to solving a multitude of genealogical problems--especially pre-1850 census. You can discover the birth, marriage or death year of your early ancestor when no other record may have survived. The best part--tax records are annual. I absolutely love tax records!

My Personal Experience In The Records

A few years ago I treated myself to a 25 hour research project in the tax records of Bedford County, Pennsylvania. I was amazed at the consistency of the record. I tracked my family in the county every year from 1772 to 1850. In the process I learned things about my family that I would have learned in no other way.

I learned that in 1798 my sixth great grandfather Israel Burket owned a two-story log cabin 22 x 30 feet with four windows. His son George who was my fifth-great-grandfather owned a saw mill and two grist mills. George's brother Jacob owned a distillery and his brother Christopher made shoes for a living. I learned many other things about this family that early census records did not tell me--like the year my fifth-great-grandfather married Catherine Swoveland. These early tax records were a gold mine containing a wealth of information about my family.

There are three basic types of direct tax records: Poll or head taxes which were levied upon a person, real property taxes which were levied upon a person's land, and personal property or income tax. These can be recorded separately but are also found combined into one record with various columns representing each property type. Numerous other direct taxes have been levied from time to time for different purposes by different states. You may encounter a gun tax, highway tax, or any other tax type the government saw fit to levy.

In some early colonial areas, quit-rents were collected. The rents, a remnant of the old feudal system in Europe, were collected by the government or by large land owners annually on small parcels sold to private citizens.

Occasionally, the Federal Government levied a tax upon citizens--usually to help defray the cost of a war or pending war. The nice thing is, these records are usually indexed--which saves a lot of time. You can usually find tax lists in print and indexed for the years 1798, 1814-1816, and 1862-1866 for any given county.

Local laws governing who was taxable and who was exempt changed from time to time and for various reasons. A poll tax levied to raise money for a new courthouse may include persons over the age of sixteen, and a property assessment the same year may only include citizens age twenty-one and above.

Tax records can be used to determine parentage. When an ancestor has been tracked in the tax records for a series of years and suddenly a male with the same surname appears on the lists next to him, he is more than likely a son who is now of legal or taxable age. Some tax records leave no doubt as to the relationship of males of similar surname. For example, the record may read Peter Swoveland and son John, or John Swoveland of Peter. Look at the extract below of part of the 1821 assessment for Stonycreek Township, Somerset County, Pennsylvania.

Jacob Fritz, son of James, is entered as Fritz Jacob son Jas. Beware of an entry such as John Smith Senior and John Smith Junior. The record keeper is only differentiating by age, not relationship. Acres cleared is a good indication of how long your ancestor has been farming the land. In this part of Pennsylvania it took about 3 years to clear 5 acres because of all the trees. Notice there is no occupation listed. This means these men were farmers.

Age And Year Of Marriage

The legal age for owning land was 21 years. A male who suddenly appears on the same assessment roll as your ancestor is most probably a son who has just turned 21.

Counties created a separate list for unmarried men often labeled singlemen or single freemen (meaning they were not indentured to any individual). Below is an example of a 1760 assessment for Colebrookdale, Berks County, Pennsylvania with a single freeman listing in the right column. 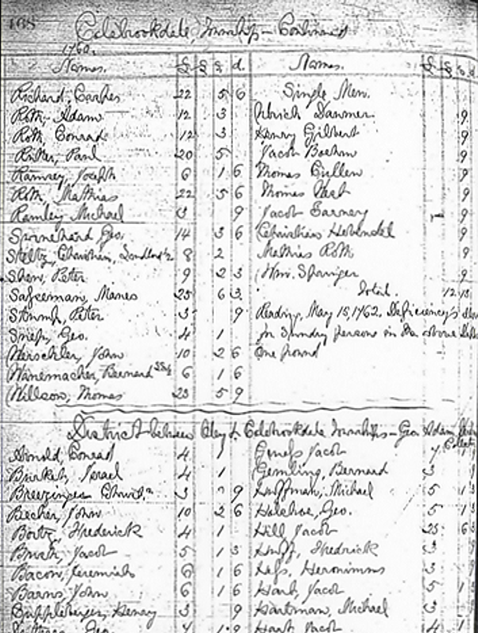 A young man coming of legal age would be taxed on his personal property--usually a horse or a cow. Once married, his name would leave the single freeman list and suddenly appear on the regular list with other heads of families.

From the information in the example below we can determine that Henry Smith married between the year 1786 and 1787.

Arrival In Or Departure From The County

You can determine the year your ancestor arrived in the county by his first appearance on a tax record. Make sure that the year does not coinside with the date the county was created. If so, be sure to search for your ancestor in the parent county. Use the same logic to determine the year your ancestor left the county. If the assessment shows enough detail, a match can be made across county and even state lines. Look for a matching occupation, livestock, or any unusual taxable items that would have been transported. Always use a series of years and always look in every township in the county. Like counties, townships were also divided.

Two Persons With The Same Name In The County

There is no record better that tax records to distinguish your ancestor from another male of the same name. Sometimes it was necessary for the assessor to also differentiate between two males with identical names. He may tag one or each of them with other identifying labels, such as John Smith--by Miller's Creek, or John Smith--tall.

Many tax records list occupation as a category, and those that don't will often include the occupation to avoid confusion between two individuals with the same name. Knowing an ancestor's occupation has tremendous value. A father may have passed his trade on to son.

From the 1783 assessment below I learned that my fifth-great-grandfather George Burket was a miller by occupation, owned a grist mill and one horned cow and lived in a cabin with six family members on fifty acres of warranted land.

Obviously, a man will disappear from the tax lists when he dies--but often the death is confirmed when his estate is still taxed awaiting probate.

The entry may read estate of John Smith or heirs of John Smith. If you are lucky enough to find an entry listing the estate of your ancestor you can determine the year of his death. Make sure to look at a number of consecutive years because the deceased may be taxed for several years until his estate is probated.

Tax records can be found at the county courthouse, the county historical society, the state archives, the National Archives, in published county histories, journals and periodicals, in books and online. The Family History Library in Salt Lake City, Utah has many tax records on film that can be viewed at local centers throughout the world. Use the online catalog to see what has been filmed for your county. Tax records have their own category in the catalog under the jurisdiction in which the record was created, e.g., county, city or state. Tax records issued for licenses and permits will be listed under occupations or business and commerce.

Tax records can solve a multitude of research problems for the family historian You may not only find your ancestor's residence but his year of birth, year of marriage, parentage, occupation, status in the community, migration patterns and finally his year of death. These records are very straightforward and easy to use. Why not see what treasures await you?

To see what tax records have been filmed for your county use the catalog link.