Do you have Portuguese ancestry, but are unsure of how to begin tracing your family history? Researching Portuguese ancestry is not difficult, but with a little background information on how to obtain records, and knowledge of helpful websites on the Internet, you may soon discover stories of your Iberian ancestors.

Researching In Home And U.S. Records

To learn more about your Portuguese roots, you will need to eventually find the town, or freguesia where your Portuguese ancestors resided. Before jumping into Portuguese records, first explore the documents you may have in your home or can locate in the U.S. If you know of places in the U.S. where your ancestor resided in his lifetime or the place he lived prior to his death, inquire at the area's local library and historical society for obituaries or biographies that may mention your ancestor's place of birth.

You may wish to order marriage licenses or applications of your ancestors. The documents could name a town of birth, especially if they married in a Portuguese community. Find the locations of the churches your ancestor attended and see if baptism records exist - they may also give you the ancestral village. Your ancestor's birthplace may also be listed on birth and death records. U.S census records from 1900 through 1930 provide the year of immigration for each person of foreign birth and naturalization status. The 1880 census provides a place of birth for each person enumerated and parents place of birth. Check the Social Security database for your immigrant ancestor. If they are included, you may write and get the form they used to apply for Social Security. The form includes a place and date of birth of the applicant.

If your immigrant ancestor applied or was in the process of becoming a U.S. citizen, the paperwork generated may provide you with the country of origin. Naturalization records are usually found in County courts, County or State archives, regional archives serving several counties within a state or in published records or indexes. For more information on finding naturalization records, see Finding U.S. Naturalization Records.

For example, a search in the immigration index on Ancestry.com for a passenger manifest for the Garcia da Rosa family in 1910 found that Manuel Garcia da Rosa and his family had sailed on the SS Madonna from Horta-Fayal, Azores, May 20, 1910 and arrived in New York on May 27, 1910. The passenger list included Manoel (sic) Garcia da Rosa, age 32, a farmhand, not able to read or write, traveling from Pico, Portugal, with a final destination of Brooklyn New York. Listed as Manuel's "nearest relative or friend in country whence alien came" was Manuel's father, Antonio Garcia da Rosa, Candelaria, Pico, Azores. Manuel stated he was going to the home of his brother-in-law, Mr. Manuel Silva, 45 Hamilton Ave., Brooklyn, New York. The form states that Manuel was born in Pico, Azores. 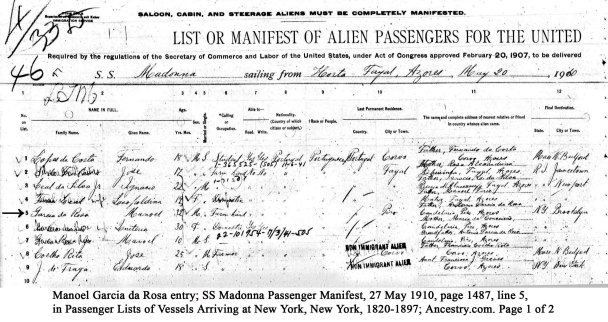 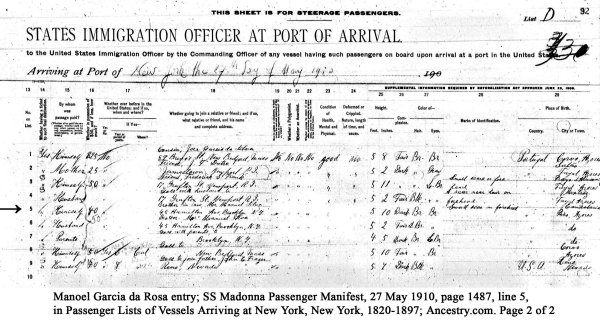 Search passenger ship lists online at the Immigrant Ships Transcribers Guild and Ancestry.com's Immigration and Travel databases (subscription only, but many libraries provide free access to Ancestry through their Library Edition). For immigrants who sailed into New York, search the Castle Garden and Ellis Island immigration center's databases in one-step through Stephen Morse's website. Search passenger databases specific to Portuguese immigration at Portugueseancestry.com or the Portuguese Passenger Ship Master List.

If you have not found naturalization records or listings in ship arrival records for your Portuguese ancestor, and your ancestor was still alive in 1940, alien registration records may be useful in documenting your ancestor's presence in the United States. Beginning in June 1940, all noncitizens 14 years or older were required to register their local post office or INS office (now the USCIS, or U.S. Citizenship & Immigration Service). The INS microfilmed alien registration records for the years 1940-1944, and the USCIS FOIA (Freedom of Information Act office) makes prints from this microfilm in response to requests. The USCIS calls these prints Alien Registration Form (AR-2), and each form is stamped with a unique Alien Registration Number. These AR forms have much information including, citizenship/nationality, port, date, name of ship, date when they arrived in the U.S., years lived in the U.S.; and date of Petition for Naturalization (if filed), and city and state where filed.

Copies of the AR-2 forms can be obtained through an online request with the USCIS "Make a Genealogy Request" Service. To locate potential AR-2 forms, first make a "Search Request". Requests for searches of USCIS indices will find whether any USCIS records exist for a specific individual. If records exist, the USCIS researchers will locate a citation for each record and provide that information to you. You can then use the citation(s) to submit a Record Request. Follow the instructions in the website before you submit a request. Once you submit your request and possibly receive a case file number, you may then submit a Record Request. Record Requests may take several months for the USCIS to fulfill.

The Portuguese started fraternal organizations to protect widows and orphans, to establish places where people could gather for social and cultural activities, and to offer insurance benefits. The societies, such as California's UPEC (Uni�o Portuguese do Estado da California) and IDES (Irmandade do Divino Esp�rito Santo) keep membership and death claim registers. The death claim registers include the name of the deceased, date admitted to the society, membership information, date and proof of death. The membership registers include the date admitted to the society, name, personal information, and place of origin (may be the village name as well as the island). To access these records you need to either contact the society that your ancestor belonged to, or if the records were filmed by the Church of Latter Day Saints, access them at your local Family History Center for a small fee. For more information on fraternal society records see Azores Genweb - Fraternal Societies.

As you branch out into ordering and researching Portuguese records, you may want to learn some Portuguese words and phrases. Familysearch.org, a website provided by The Church of Jesus Christ of Latter-day Saints, has a Portuguese Genealogical Word List, to help familiarize you with Portuguese words commonly found in genealogical sources. The website also includes a Portuguese Letter-Writing Guide to assist you when writing letters to Portugal's archives. However, since many Portuguese records have already been microfilmed and available through the Family History Library, check the Family History Library Catalog first for existing records before you send for the records.

Many of the websites for the major Portuguese archives are written in Portuguese. Use an online translation tool such as Google Translate, to help you get a least a rough idea of the website's content and instructions.

Once you have found your ancestor's town, or freguesia, it is helpful to know that the freguesia is grouped with other towns into a council (much like U.S. counties) and councils belong to a district. Records are generally kept on the district level, whether it is Civil Registry or in libraries (bibliotecas) and archives (arquivos). The last 100 years or so can be found in various Civil Registries. Records older than that are stored in the region's Bibliotecas e Archivos. Mainland Portugal has 18 district archives, the Azores has 3, and the Madeira Islands have 1. Search for existing towns, councils and districts through the Freguesias de Portugal website. Search a database of all towns, councils, islands and parishes at Portugueseancestry.com.

A list of district archives is available at The General Directorate of Archives (DGARQ) website. For more advanced research, learn about the holdings in the Instituto dos Arquivos Nacionais / Torre do Tombo, or National Archive of Portugal, located in Lisbon. The archive houses records dating from the 9th century to the present.

Church records provide especially valuable information, and Catholic churches kept thorough records dating to the 1500s or even earlier. The register of baptisms and marriages became compulsory in 1563, and death registrations in 1614. Portuguese churches kept records of baptisms (baptismos), marriages (casamentos), and deaths (obitos). Records from the 1800s are particularly complete and include many details. Record books with no entries more recent than 90 years ago will generally be in district archives. Church records were seized by the Portuguese government in 1910 and many church records today are included with civil ones at district and national archives For details on the genealogical value of Portuguese church vital records, as well as examples of these records, see Portuguese Vital Records. Some Portuguese parish records were filmed and are available to view online at ETombo.com. 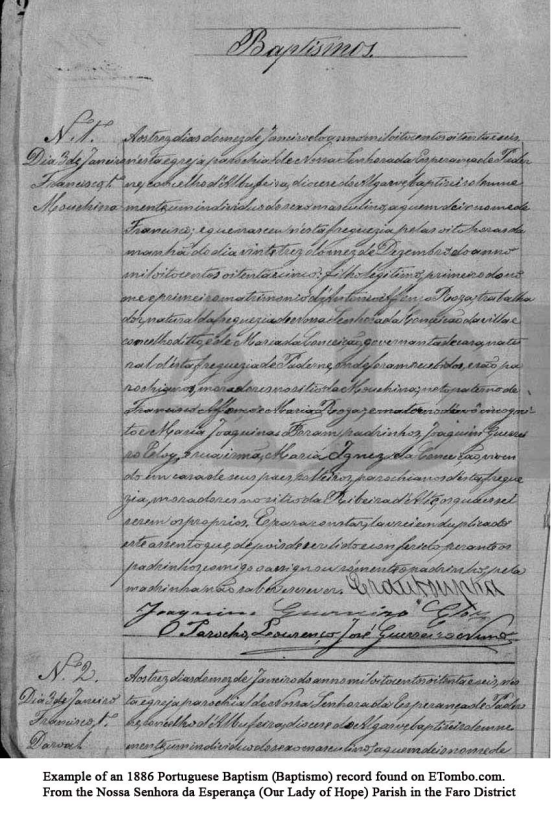 Many Portuguese records (civil and church) were filmed by the Church of Latter Saints and you can order them from your local FHC. About a half-million indexed baptism, marriage marriages and deaths in Portugal (about 1530 to 1910) were filmed. To find a complete listing of what is available in your area of research, type in your locality (such as Portugal, A�ores, or Portugal, Madeira) in the "place-names" in the Family History Library Catalog.

"Passaportes" are Portuguese immigration documents that are much like American passenger records. These documents begin in the 1700s; although most are available starting in the late 1800s to early 1900s. The passaportes contain the emigrants name, age, occupation, birthplace, date of application, destination, and parent's names. Passaportes are found in both district and national archives. The Family History Library has filmed some of Madeira's passaportes and the Azores government is currently digitizing its passaportes: see Passaportes - Centro de Conhecimento dos A�ores.

Portugal Genealogy Forum
Post your surname or query, browse through past messages, or ask for help with your Portuguese genealogy research in this message board devoted to genealogy in Portugal