U.S. census records were collected and compiled with the intent of counting every person living in the states for the purpose of determining representation in Congress. From the first enumeration in 1790, revision of those schedules included determining the acreage of agricultural land and production, a measurement of industrial growth and development and the population count of slaves and their housing.

Slave schedules (also referred to as Schedule 2) are available for census years 1850 and 1860. Records were generally compiled in the Southern slave-holding states and records are extant for Alabama, Arkansas, Delaware, the District of Columbia, Florida, Georgia, Kentucky, Louisiana, Maryland, Mississippi, Missouri, North Carolina, New Jersey, South Carolina, Tennessee, Texas, Utah, and Virginia. They are available at the U.S. National Archives, in most state archives and may be available in other libraries and archives in your area. A partial set of searchable images is available at Ancestry.com 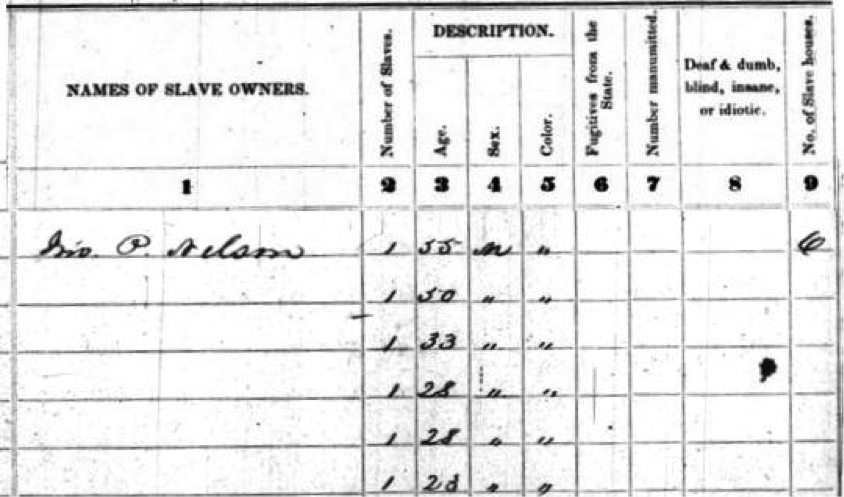 When using slave schedules, one strategy for use is to Predict, Examine, Compare and Correlate. Based on our previous research, predict what should appear on the record, examine the record carefully, comparing the data reported to the predicted data, and correlate this information with other resources. Let's look at an example:

Although the schedules may not provide all the information we desire, there are ways to connect this information to other records and ways to use this schedule for our research purposes. This record connects to the 1850 Free Schedule for I.S. Smith and family. This shows us that Isaac S. Smith is a 30-year-old merchant born in Virginia. There should be other records that will correlate to the individuals enumerated in this schedule. We could also look for Isaac S. Smith's slave household in 1860 for comparison.

Let's continue using our strategy of Predict, Examine, Compare, and Correlate with the case of Mariah Gaines Polk of Montgomery County, Tennessee. According to her death certificate, her parents were Manke [Manica] and Clarise Gaines.

According to the 1870 census, Manica Gaines/Gains and family were living in the Port Royal area of Montgomery County, Tennessee. Their enumeration follows:

Based on previous research, the young slave owner was named William Gaines. Let take a look at the 1860 slave schedule. First, we see our slave owner, W. Gaines being reported by his guardian, James E. Gaines. The slave schedule contains a long list, but here is no male in the 40-year-age range, and only one female in the 30-year-age range. There are several children who fit the ages of Maria and Sam. Many of these enumerations are not arranged to easily connect the individuals to what is known about them, generally a later reported age. In some cases, we might determine the individual we seek immediately. More often we can determine who they might be and use this record to help us find additional information.

Since slave schedules are most useful when correlated with other records, we should consider what records are available. In the 1870 U.S. Census, the Marion/Manica Gaines family was enumerated two houses before Sallie Allen and William Gaines. The parents of William N. Gaines, the son of A. C. and Louisa Norfleet Gaines, died before he turned 8 years old and William was raised by his aunt Sallie Allen. [3]

William N. Gaines inherited a large estate at the time of his father's death. J. E. Gaines, the brother of A. C. Gaines, was appointed guardian for William. Within the guardian reports filed in 1858 by J.E. Gaines the following list of slaves reported: "Maria & Sam, children of Clarisa, Sam [aged] 3 & Maria [aged] 5." [4][5] This correlates with the data collected from the census records and slave schedules.

Correlating With Other Records

Consider the many options for correlating the individuals enumerated within a slave schedule. Here are some of my favorites:

Slave schedules are an important record in locating enslaved African Americans and their slave owners. Remember to use a proven strategy and examine the records carefully. Predict, Examine, Compare and Correlate to successfully use these records.