Look in the Right County

The records found in local repositories will vary by location. Jurisdiction is the power given legally to an officer or an elected official over some defined territory. Jurisdiction also refers to the location or area where a government agency or office has authority. The Tennessee State Legislature had given the authority and jurisdiction of marriage in Tennessee to the County Court and records were created by this Clerk's office.

Determining where a marriage record is located also means determining where it was created. Tennessee's county boundaries have changed over the years since statehood. The Newberry Library in Chicago has compiled these county changes into a wonderful site called the Atlas of Historical County Boundaries. This site displays the historical boundaries over the modern boundaries, in a format than can be printed or saved. Using this tool we can determine in which county the marriage occurred.

One published resource used by many researchers is Red Book: American State, County, and Town Sources, edited by Alice Eichholz. This resource provides details about a variety of record types focusing on their availability by location. This resource was digitized in 2010 by Ancestry.com. The section on Tennessee Family History Research serves as a foundational resource to learn more about the history and records of Tennessee.

The process of obtaining a marriage license included a marriage bond (parental approval when required), license was issued, return by officiate indicating marriage ceremony. In some jurisdictions, it is possible that more than one of these record types were created in a given timeframe, and in some cases all of these records may exist in some format. You should examine each record for a given marriage. The names that these record may be called include: Marriage Book / Marriage Register; Marriage Bond Book/ Marriage Bonds; Marriage Certificate Book; Marriage/Minister/Officiate Returns; Marriages Licenses (loose papers); Parent/Guardian Permissions (loose papers).

Declaration of Marriage (or Freedman's Declaration Book) or Freedman's Marriage Register are available for Memphis (Shelby County) and Wilson County. Since Tennessee declared all marriages created during slavery to be valid without registration, these are not as common as in some states.

Early marriage records often consist of a marriage register like the following. The first entry recorded the marriage of Cave Johnson and his bride, Elizabeth Brunson on 20 February 1838. The right side of the page has the return of the minister, Reuben Ross. This also contained the name of the bondsman who provided security on the marriage bond.

State of Tennessee, Robertson County Know all Men, That we, [groom and bondsman] of said County and State of Tennessee, are held and firmly bound unto the State of Tennessee in the sum of Twelve Hundred and Fifty Dollars, to which payment, well and truly to be made, we bind our heirs, executors, and administrators, and each and every one of us and them, both jointly and severally, firmly by these presents.

The Condition of the above Obligation is such, That, whereas, [groom] hath prayed and obtained a License to marry [bride]: Now, if there shall not hereafter appear any lawful cause why the said [groom] and [bride] should not be joined together in Holy Matrimony as husband and wife, then this obligation to be void and of no effect; otherwise to remain in full force and virtue.
Witness our hands and seals, the [day] of [month], [year]
[signature of groom] (L.S.)
[signature of bondsman] (L.S.)

The $1250 amount indicated on this marriage bond would only have been paid if conditions for a lawful marriage were not present (for example, the groom currently in a marriage relationship.) The bride would collect through a court action.

After 1838, counties were required to bind marriage records in books. Most counties used printed marriage registers which recorded on one page all documents created for a couple. In many cases the loose records have also survived. Note that most Tennessee marriages do not supply information about birth locations or parents of the couple. 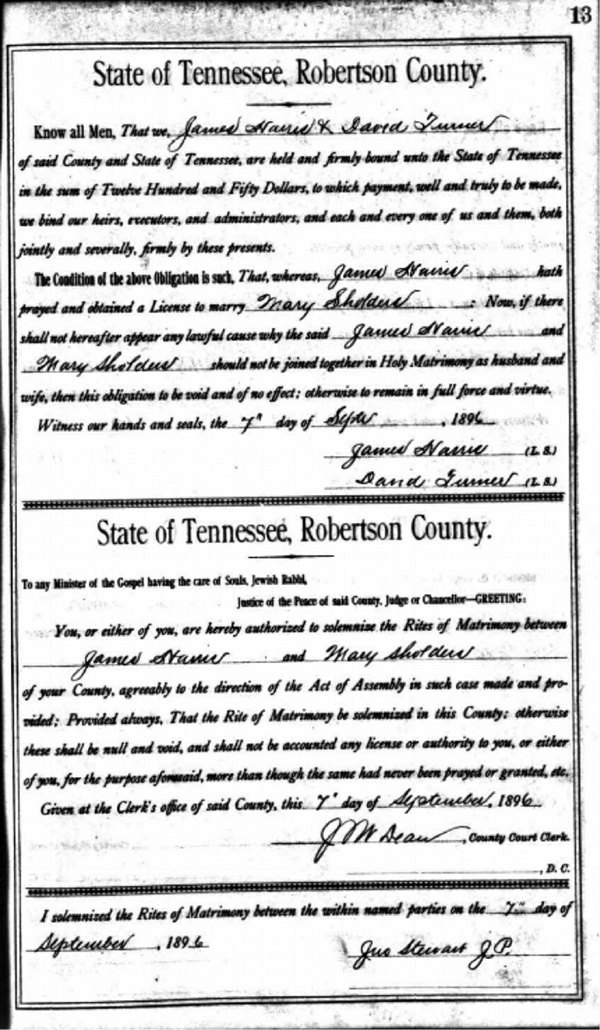 Genealogists regularly look for the dates of marriages. As researchers, we must strive to look at the complete record whenever possible. Unfortunately, we often miss finding the complete picture when examining marriage records.

Since Tennessee was the western territory of North Carolina, the earliest marriages created would have been considered that colony. Many early marriage were recorded by a bond and the "thrice publication of the banns" or declaration of intent to marry. [1741, North Carolina Acts] Other early marriage edicts supplied prior to the statehood of Tennessee include: A lawful and proper authority for a solemnization of marriage. A person duly qualified by the acts of the Assembly to solemnize the marriage, a justice of the peace of one county has no authority to solemnize the marriage ceremony in another county, a second marriage during the existence of the first marriage of one of the parties renders the second marriage void, the Clerk of the County Court to issue license with a fee of fifty cents.

Since Tennessee marriages do not contain lots of family information, we must extract all the information contained within the record. As you review the record, consider these questions:

(For other ways to get more information out of marriage records, watch the Archives.com livestream video "Going to the Chapel: Getting the Most Out of Marriage Records" by Amy Johnson Crow.)

Wrapping Up and Starting the Search

The best way to learn more about these wonderful records in Tennessee is a search through the collections and a careful read of what's available. Some records have been lost in Tennessee, but the majority of marriages are extant and available. Seeking out the various types of records that may have been created because of the marriage and pulling out all possible information will help you learn more about your Tennessee ancestors.