When doing 19th century research, we often look at Federal census records, deeds, and tax records, but many researchers don't look at school censuses. You can be sure that associated people, such as future spouses, business partners, etc. are to be found in school records. What's more, school censuses aren't just about kids. Many school censuses list the father, which can make them a substitute birth record.

In this article, we'll use North Carolina school censuses as an example. Use this information as a blueprint for locating and using extant school records for wherever your research takes you.

School censuses were typically separated into male/boy and female/girl columns. Some lists are further broken down by race. As you can see from the following examples, the information provided and/or required in any given year varies. Any information found still helps us since it confirms that a family was located in a particular community and/or help identify and "age" the children.

Here are some examples of school census records from Wilkes County, North Carolina starting with 1841 and ending with 1887. The information and format varies from year to year (sometimes even within a year). In some regards, the earlier records can be more informative as they will sometimes lists parents correlated to children whereas the later records only list the children.

Notice how in the example below, the enumerator listed the head of the family and then the males and females in that family. 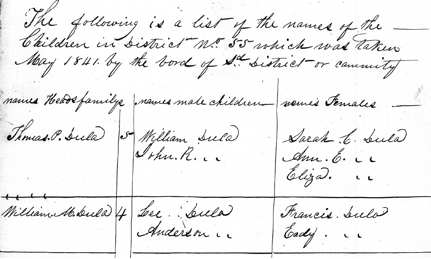 Another enumerator for the same year in the same county only grouped the children and did not indicate a parent, though we can at least see who is related to whom. It takes a bit more work when reconstructing families, as you need to correlate the male and female names based on their sequence in the various lists, as they are in this example:

The census for 1853 listed of all children and a separate list of which children actually attended school. Notice that the children are not linked to a parent or head of household, though based on the order of names in the list, you can reconstruct siblings with some certainty. 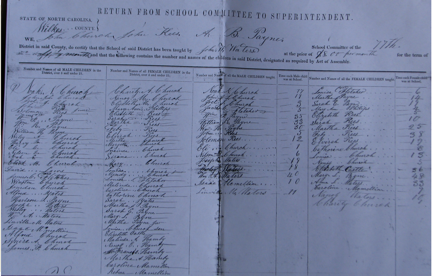 In 1887, we don't get a list of the children. Instead, it lists only the "parents or guardians" with how many children of each sex. This can still be useful since this helps bridge the gap created by the lost 1890 Federal census. We can at least put the family in this place at this time. 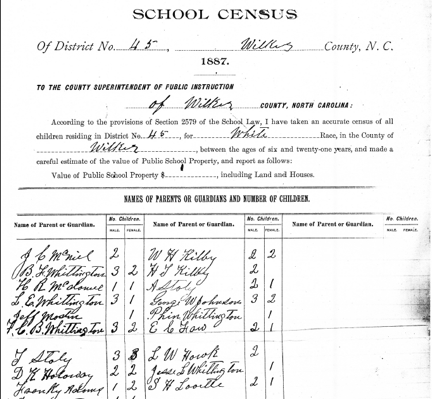 Each state created their own law with regards to schools and education. Learn what that law is to help guide you as to what records might exist for your community of interest and also where you might find them. These laws can be found in state histories as well as some statewide genealogical guides.

Other resources to help you better understand the history of schools in North Carolina include:

Look online for your own state's education laws. Google Books is a great resource. Also look at the website of your state archives and state library. Based on the North Carolina law I know that before 1839 I will not find school census records in North Carolina and that only "private" educational opportunities and home-schooling were available. I can tell you that newspaper advertisements and city directories can be great ways to learn about the creation of academies.

State archives are an excellent place to start looking for school census records. For North Carolina, the easiest way to find most of what is available is to go to the MARS catalog of the State Archives of North Carolina and search for "School Records." This will bring up a list that is alphabetical by county for both "School Records" and "Miscellaneous Records." The "School Records" entries often reflect records found in the collection of the Clerk of Superior Court; Clerk of Court of Pleas and Quarter Sessions; Register of Deeds for the county and the "series" is generically described as including "boxes and volumes of school census records, school registers, school fund account books, vouchers of teachers, and miscellaneous school records." Just what we're looking for!

Though State Archives of North Carolina holds many of the extant school records for North Carolina, it doesn't hold all the records. For example, the Rowan Public Library holds the school census of 1923/1924 for Rowan County.

Additionally, eager volunteers have sometimes abstracted school census records and made them available online. For example, select school districts for Granville County have been transcribed on the Granville County NCGenWeb site.

Some have been published. Your local library might be able to borrow such volumes through interlibrary loan.

If your research is in the South in the post-Civil War period, take a look at the Freedmen's Bureau records. Both the Records of Superintendents of Education and the Field Office Records may contain school information. 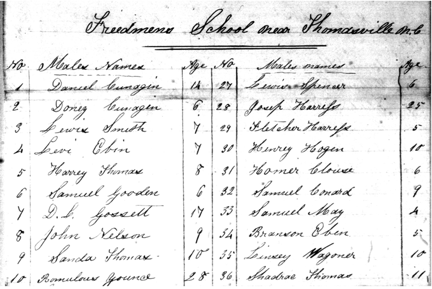 As with other records, original school censuses have not survived for all counties for all time periods.

Obviously, there is so much that can be said about school records! Hopefully, now that you have seen what records can be found about 19th century North Carolina students, isn't it time for you to see what your state might have to offer?