There are so many sources of information that have relevance when researching your free black or slave ancestors. Many of these are the same resources that are important to all genealogy researchers. There are other often lesser known resources that are relevant to and/or specifically focused on African American ancestors. At a minimum these might give you more context for your free black or slave ancestors or you might find records specific to your family that just might directly advance your African American research. These are less broad (sometimes in terms of geography and sometimes in terms of focus), smaller collections and yet contain invaluable information!

The biggest caveat to using any of these resources is to have exhausted research into more classic records such as the census and vital records (birth, marriage, death) to ensure that you have a thorough understanding of your family and that you are following the correct family in terms of names (including any aliases they may have used), where they lived, as well as the composition of the extended family, etc. If you have not yet completed this step, please see the resources listed at the end of this article which can guide you as you start or continue your journey into your African American ancestry.

Though many and not all of the websites I list are specific to slaves, remember that many free blacks were previously enslaved until manumitted. These websites are listed in alphabetical order. 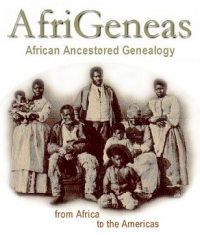 The word AfriGeneas is derived from African-American Genealogy Buddies and the site is devoted to African-American genealogy, from researching African ancestry in the Americas to genealogical research and resources, in general. It is also an African Ancestry research community featuring a mail list, the message boards and daily and weekly genealogy chats.

DO check out the online beginners guide.

Search a database of 100,000 Louisiana slaves, the product of 15 years of research by Rutgers University history professor Gwendolyn Midlo Hall. It is based on documents from all over Louisiana, as well as archives in France, Spain and Texas. The database includes recorded and calculated information about African slave names, genders, ages, occupations, illnesses, family relationships, ethnicity, places of origin, prices paid by slave owners, and slaves' testimony and emancipations.

This database includes approximately 3,400 names found in governmental records involving the servitude and emancipation of Africans and, occasionally, Indians in the French and English eras of colonial Illinois (1722-1790) and African-Americans in the American period of Illinois (1790-1863). The Archives extracted the names of servants, slaves, or free persons and masters, witnesses, or related parties from selected governmental records to produce this database.

A searchable database of detailed personal information about slaves, slaveholders and free people of color, drawn from petitions to southern legislatures and country courts filed between 1775 and 1867 in the 15 slaveholding states in the US and the District of Columbia.

For example, we learn that Simon Turner of Wake County mentioned 16 slaves in his will dated 29 November 1790. The database lists out the heirs of Simon Turner as well as the named slaves and most importantly the original source of that information. If you were looking for an ex-slave who lived in Wake County (NC) and had a surname of Turner, this might have relevance to you. 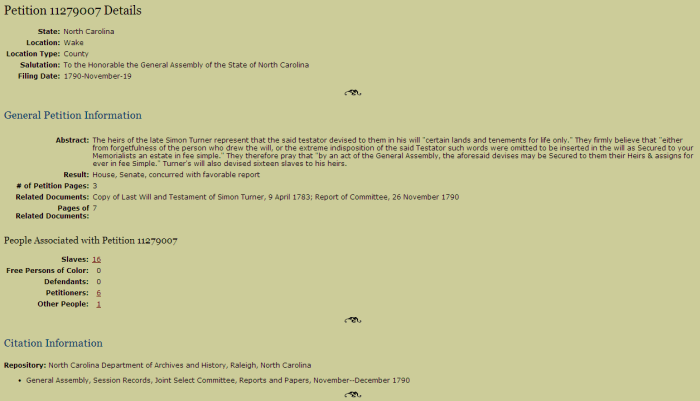 Paul Heinegg shares the entire body of his published work on free African Americans online, as found in his two published books on the subject. The site includes about 2,000 pages of family histories based on colonial court order and minute books, free Negro registers, marriage bonds, census records, tax lists, etc. Additionally there are resources for free families of color livings in Illinois as well as additionally records for VA, NC, DE, MD, SC, and TN.

This site was created by The Schomburg Center for Research in Black Culture, a research unit of The New York Public Library. The web-site presents more than 16,500 pages of texts, 8,300 illustrations, and more than 60 maps and is organized around thirteen defining migrations that have formed and transformed African America and the nation.

Each migration is presented using five focal points: 1. Narrative, 2. Illustrations, each with caption, and bibliographical, indexing, and ordering information, 3. Research resources consisting of essays, books, book chapters, articles, and manuscripts, 4. Maps, and 5. Lesson plans for teachers. In addition, each migration has a bibliography (references) and a gateway of related Web sites.

The Making of African American Identity

This a collection of primary resources -- historical documents, literary texts and works of art -- thematically organized with notes and discussion questions focusing on African American history for three different eras: 1500-1865, 1865-1917 and 1917-1968. These are part of the Toolbox library of the National Humanities Center. For 1500-1865, the themes are Freedom, Enslavement, Community, Identity and Emancipation. The 1865-1917 themes are Freedom, Identity, Institutions, Politics and Forward. For the 1917-1968 period, the themes are Segregation, Migrations, Protest, Community and Overcome.

The materials are fascinating. For example, under the Enslavement theme for the 1500-1865 time period, there is an eight page document that contains selections of the correspondence between William Pettigrew (a plantation and slave owner in North Carolina) and Moses and Henry (black drivers on the Pettigrew plantations), 1856-1857. This would be an amazing find for anyone researching the Pettigrew family, and for those who learn that their ancestor served as a driver on a southern plantation.

The New-York Historical Society has a substantial collection of manuscript materials documenting American slavery and the slave trade in the Atlantic. There are currently fourteen collections on this web-site and they consist of diaries, account books, letter books, ships' logs, indentures, bills of sale, personal papers, and records of institutions. Some of the highlights of these collections include the records of the New York Manumission Society and the African Free School, the diaries and correspondence of English abolitionists Granville Sharp and John Clarkson, the records of the Massachusetts Anti-Slavery Society and an account book kept by the slave trading firm Bolton, Dickens & Co.

This collection contains more than 2,300 first-person accounts of slavery and 500 black-and-white photographs of former slaves. These narratives were collected in the 1930s as part of the Federal Writers' Project of the Works Progress Administration (WPA).

Also check out American Slave Narratives: An Online Anthology (University of Virginia) and this list of related projects, most of which are based on the WPA slaves narratives.

There is another project, North American Slave Narratives which collects books and articles that document the individual and collective story of African Americans struggling for freedom and human rights in the eighteenth, nineteenth, and early twentieth centuries. This collection includes all the existing autobiographical narratives of fugitive and former slaves published as broadsides, pamphlets, or books in English up to 1920. Also included are many of the biographies of fugitive and former slaves and some significant fictionalized slave narratives published in English before 1920.

Note: Not all slave narratives are part of a "collection" of such. Research into the Miles family resulted in finding that a slave narrative for Lafayette Miles (parents were a white woman and an enslaved father) in the Southern Historical Collection, the University of North Carolina at Chapel Hill, Thaddeus S. Ferree Papers.

A free online database for records of African American genealogy and history. Afriquest is a place to share and preserve documents, images and family oral history. Every document, image or story you add to Afriquest will be preserved and will remain free to access, for generations to come. Everything shared here belongs to the contributor. Larger projects which currently have included data are the USF Africana Heritage Project, the Lowcountry Africana collection along with records of African American Genealogy in Alabama and Georgia.

In August 2000 the California legislature found that "[I]nsurance policies from the slavery era have been discovered in the archives of several insurance companies, documenting insurance coverage for slaveholders for damage to or death of their slaves, issued by a predecessor insurance firm. ..." As a result of this find, two databases were created: Slaves Names and Slaveholder Names - these are both arranged alphabetically and both databases contain the names of both as well as information on location and insurance company who underwrote the original policy.

Illinois also enacted similar legislation and maintains a similar listing of slaves, slave holders, locations and policy holders - Slave Policies Reported to Illinois Division of Insurance. This list is grouped by insurance company (Aetna, New York Life and United states Life Insurance Company of New York). Both lists are mostly similar though there are a few differences and so you might want to consult both just to be sure.

A search on NC generated over 100 matches and there were many references to Wilmington, with some to Fayetteville, New Bern (Craven County), Chatham County, Martin County and other locales. So, do check the list for your enslaved ancestor regardless of where they lived. And, it's not unusual that the slaveholder is listed with a different location than that of the slave.

This database includes information on almost 35,000 slaving voyages that forcibly embarked more than 10 million Africans for transport to the Americas between 1514 and 1866. Records of the voyages have been found in archives and libraries throughout the Atlantic. They provide information about vessels, enslaved peoples, slave traders, owners and trading routes. 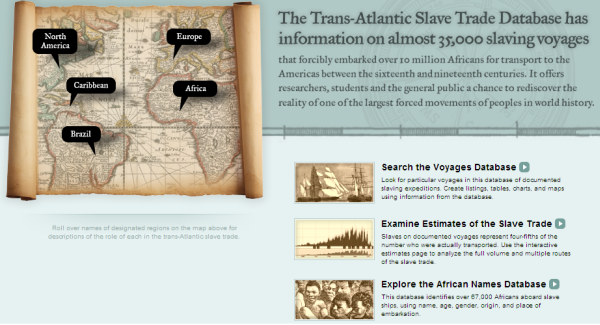 As you can imagine, the listed resources are just the tip on the iceberg for African-American research. If you are doing free black, enslaved or related research, do consider checking these out. Remember that these resources will best serve your research when you have already firmly established who your ancestors were, whether free black or enslaved and done well-documented research back to the time of the Civil War. Armed with information on first names, surnames, locations and more, the mentioned databases might just fill in some gaps or identify which antebellum plantation your ancestors lived on or other interesting facts about their lives.