Learn from Experts ›› Research Strategies ›› Borders: Just A Line On a Map

Borders: Just A Line On a Map

More often than not, whether you had a family living near a county or stateborder, there is a good chance that they conducted their business or were involved in various matters (e.g., attending church, marrying, etc) in adjacent counties or even the next state. Many families seemed to behave as if the "borders" didn't exist. Its important to recognize and appreciate that mentality to make sure that you expand "where" you research when you can't find ancestors in the census or other records tied to a certain geographical area.

Let's look at some examples of families whose records are found in those of adjacent counties or nearby states.

The Clark(e) family has been found mostly in the records of Bertie and Halifax counties in NC. Exhaustive research into the marriage records of both counties did not yield a marriage for Jonah Clark and Viola Clarke (born in Bertie County). By the 1900 census they are living in Halifax the records suggests that they were married c. 1895. Given that NC marriage records starting in 1868 were pretty comprehensive, the inability to find this marriage record was frustrating. Research into neighboring counties of Northampton and Hertford counties was equally unsuccessful - where did they marry?

To make a long research story short, ultimately, it was learned that they were married 4 Sep 1895 in Southampton, Virginia. This is a NC/VA border county, near Bertie and yet not adjacent. It is not clear why they married there and maybe the fact that the groom was 28 years older than the bride may have played into the choice of location. We also learned from the marriage record that though all later records gave the grooms names as Jonah, his marriage record lists him as John Henry.

The increased availability of the marriage records of multiple states (via FamilySearch for example) is making it easier to research on and find marriages that occurred in unexpected places.

Patriarch Nelson was born in NC, settled in MS, and also lived in Tuscaloosa AL. At the same time, we find other contemporary individuals sharing the Walden surname - Jesse, Richard and John.

With so few records available for this period of time, land records became the main focus. A search in various abstracted books (including records from the Tuscaloosa County Alabama Tract Book) and also into the online Land Patent Search (Bureau of Land Management - General Land Office Records) tells us that Richard, John, Jessie and Nelson Walden all purchased land in the 1830s in Tuscaloosa.

Other research tells us that Richard Walden died in adjacent Fayette County in 1860. On a whim, the land search was expanded on Richard, John, Jessie and Nelson and what do we find -- both Nelson (images below) and Jessie also had land patents, on the same day, in neighboring Fayette County. In both cases, both Nelson and Jessie declared themselves to be living in the county where the land was purchased. We know that their land was not adjacent along this border; suggesting that Nelson truly wasn't living in both counties on the same day and may be for expedience declared his allegiances for convenience.

Land Grants for Nelson Walden, on the same day, giving his residence as both Tuscaloosa County and Fayette County Alabama

So, where previously we were going to focus on the records of Tuscaloosa, we now know that the records of Fayette may have more relevance than previously expected. Though its tempting to "narrow" our searches to a smaller geographic area to reduce clutter, it can be invaluable to do a "broad" search and be surprised to learn that records of your ancestors can be found in unexpected places.

Census records made it clear that Squire (aka Esquire aka Boss) Gunter lived in Surry Co, NC in 1910. Further research revealed that for the 1880 census, Esquire, wife (Elizabeth) and family were living in Dan River, Patrick, VA. For this record, purportedly Esquire and wife were born in NC with the children born in VA. So, they had previously lived in the neighboring state of VA. After Squire dies, sometime before 1900, we find in 1900 that his widow, Betsy A, has returned to Dan River, Patrick, VA with all six of their children.

This pattern of viewing the NC/VA border as porous continued when one looks at the marriage records for parents and children ...

Notice that in the same year, 1902, siblings married in both Patrick, VA, and Surry, NC.

The map snippet illustrates that these were all adjacent counties along the NC/VA border and the records of each locale became important for the project. 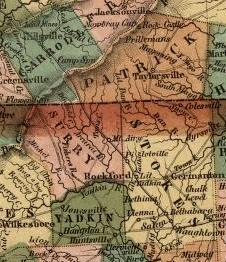 The Welch/Welsh family did a similar danced in the records of several counties across the NC/VA state line. This brief synopsis gives you a sense of the lack of loyalty the family seemed to have to any one county.

Though many families made big leaps from say NC to the Southeast and/or the Midwest or even further west, some families seemed to migrate as new more westerly counties were formed (e.g. from Indian lands in Georgia) or as territories/republics became states (e.g. Texas in 1845) or took a more leisurely route to what may have been their ultimate destination all along.

In 1850 we find Eli Mainor and family in Caddo Parish, LA. Caddo Parish was a LA/TX border county. Panola County TX was formed in 1846, one year after TX' statehood and we find Eli and family in the 1860 census in Panola. A move of just a few miles has the family in a new state and county. The family eventually moved a couple of more counties west (Wood County, TX) where they ultimately remained.

The mentioned 1850 census is very important with regards to this family. It gives you a road map of where the family lived and for about how long as they slowly moved from NC to Caddo Parish, LA - NC, SC, GA, AL, TX and LA.

Note that they did a dance between TX and LA suggesting that they dallied in TX for a few years while it was the Republic of Texas spent some time just over the border in Louisiana before permanently returning to TX.

Hopefully through these simple examples you have gotten a taste for why it can be important to broaden ones' search geographically. Though the examples covered the 19th & 20th century, the same factors are also important in earlier (and later) research.

So, some reasons to look in other counties/states for records on your ancestors:

All of the above and other reasons suggest that for many families, their records are not necessarily all going to be found in repositories of the county where they lived. And, the closer they lived to a county border or state border, the more likely you are to find records scattered across two states and three or more counties.