Providing relief to those in need is not a modern concept. All through history, records reflect the providing of assistance or relief to those in need. Our ancestors may have received food, been exempted from paying taxes, been apprenticed, received support money for a bastard child, been hospitalized in a sanitarium, or received any other form of relief. We don't like to think of our ancestors being in such a situation; however, the records left behind can give us good information for our research.

Beginning in the late 1700s, the United States saw the creation of county poorhouses and poor farms. They provided assistance to the impoverished and the infirm. This article will talk about the North Carolina system of poor relief to give you a glimpse into how this was handled in one state. Similar records may exist in your state.

Poor Laws and the Records

Since the terminology for how or what entity provided "relief" to our ancestors in need was not the same, do spend some time learning about the history of poorhouse law and service provisions for the community you are researching. Understanding the law and who provided such services will guide you to those record groups and repositories where you need to commence your search. For example, in North Carolina, one might start by consulting Public Poor Relief in North Carolina, Roy Melton Brown, University of North Carolina Press, 1928.

The State Archives of North Carolina describes the records of the Wardens of the Poor as "concerning the care of the poor and infirm, a function of the county before assumed by the State Board of Charities and Public Welfare in 1917. In colonial times, care for the poor was an ecclesiastical responsibility; records from this period may be found in vestry minutes. From 1777 to 1868, maintenance of the unfortunate was entrusted to the Wardens of the Poor; after 1868, the Board of County Commissioners assumed the responsibility. Volumes may include vestry minutes, minutes and accounts of the Wardens of the Poor, accounts and registers of the county home, and accounts of outside poor (impoverished persons living at home rather than in the county home)."

From this description, we know who in North Carolina kept the records and when they were kept. Looking at catalogs of other states' archives and state historical societies can give similar information for poorhouse records in those states.

As with most types of records, you may not find them all in one place. For example, in North Carolina, many of the records can be found by searching for "Wardens of the Poor" in the catalog for the North Carolina Archives. Though, do recognize that this doesn't mean that the records were all neatly collected for us in one place; you may have to look in several places with regards to your target county. The records may still be in the county, either with an agency that performs a similar function today or stored away in the county courthouse. They may have been transferred to the state archives or state historical society.

So, you suspect that your ancestors weren't well off since you don't find them paying taxes, owning land, having estate records, etc. Though it maybe that these records don't exist for your ancestors, you find a clue such as a dispensation in the court minutes stating that your ancestor doesn't need to pay taxes, etc.

Remember that though a law may apply across a state, such as North Carolina, this does not mean that the paperwork created by each county was the "same" or that it even survives. Even though they were governed by state laws and regulations, county poorhouses operated somewhat autonomously. The records kept and the detail of each varies dramatically. Some clerks were quite wordy in their entries whereas others were quite minimalist. Remember, they were mostly concerned with making sure that the books balanced.

Here are a few examples of compilations found online for North Carolina, which will give you some idea of what you might find in these records, both in North Carolina and elsewhere.

As with other records, it sometimes seems that the more modern the record (at least in the 1800s), the more minimalist they became. Here is an example of an 1876 poorhouse record for Wake County and its just columns of names and payments. Though, you can still see if your ancestor is listed! 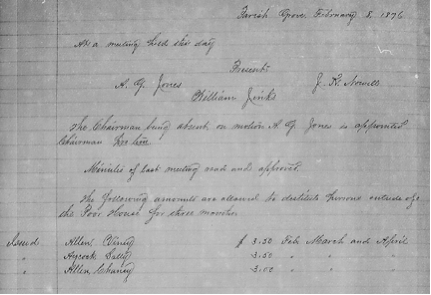 In researching the Merritt family in Sampson County, North Carolina, it became very clear that you had the "haves" and "have nots." Of course, I was researching the latter.

After looking at a lot of records and not finding my target person except in Court Minutes for 1813 when he was bound as an apprentice I decided to look through the surviving Wardens of the Poor records. Though I did not find a mention of my target person, Gibson Merritt, I did find mentioned, in the same year, two other Merritts (Drewry and Haywood) receiving aid. Though I could never find any documentation to "connect" these individuals as siblings, the "timing" of their entries in the Wardens of the Poor is very suggestive that they were related.

This table snippet summarizes some of the Wardens of the Poor records found for this family - Drew and Haywood are mentioned for several years, under different individuals. By the 1820s, Gibson is off to Tennessee, Drewry remained in the Sampson area, and Haywood continued to be a bit of a mystery. 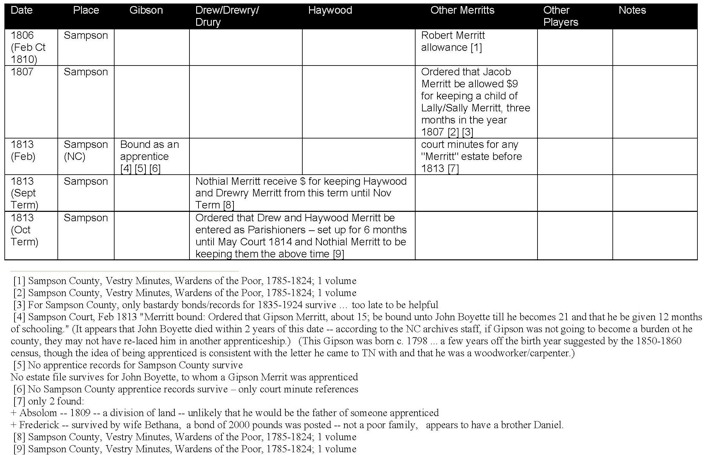 Here are two examples of the original entries.

If I had not researched these records, I wouldn't have made any connection to Drewry and Haywood and followed their families to help flesh out how they might be connected and forced me to be even more "exhaustive" in my hunt for extant records.

As today, our ancestors weren't always in a position to provide food and shelter to themselves nor their families, whether temporarily or for a more extended period of time. Do look into poorhouse and poor farm records for your ancestors, especially during an economic downturn, after a disaster or when you just can't seem to find any other record for them.

For a general picture or other locale-specific records of relief for the poor, check out these resources: