If your ancestors lived from Delaware to Texas during and just after the Civil War, you do want to check out these records.

Too often it is assumed that these records "only" apply to ex-slaves and that couldn't be further from the truth! Though they are a great resource for researching emancipated slaves, they can also be helpful when researching "anyone" who lived post-war in those states directly impacted by the Civil War. If your family tree contains confederate soldiers who were wounded or killed in action, their surviving parents, spouses or children might be found listed in these documents as they requested or received rations, were declared destitute, etc.

If your ancestors were freed, they might also be found receiving rations, or being a party to a contract, etc. Or, maybe their children attended a school. Maybe a soldier ended up at a hospital or your family returns to reclaim abandoned land - these and more are all reasons why "your" family might be found in these records, regardless of race or pre-war socio-economic status.

Because the records of the "field offices" are the ones most likely to list the most "names," they are the easiest to discuss and research when first exploring these records for your ancestors. Think of "field offices" as the on-the-ground entity which your ancestor would have directly and personally (e.g. face-to-face) interacted with. So, unless stated otherwise, assume that the records below were found in the records of a "field office." The bibliography at the end will direct you to useful resources which will enable you to explore other related and relevant records. 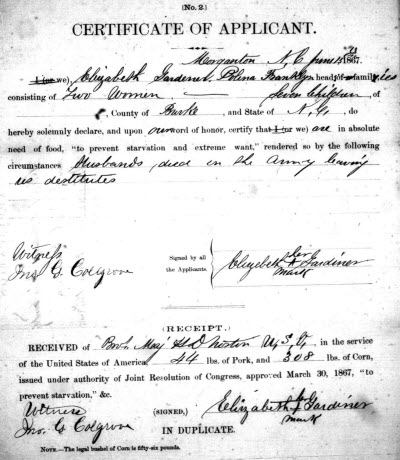 What Is The Freedmen's Bureau?

Let's now talk a bit about the creation and operation of the Freedmen's Bureau (short-hand for its full name), the records it produced and their utility to genealogists, and what resources will be helpful to you as you delve into these records. To help "focus" the discussion, North Carolina is used as an example and do research the particulars for whichever state(s) interest you.

"The Bureau of Refugees, Freedmen, and Abandoned Lands, also known as the Freedmen's Bureau, was established in the War Department by an act of Congress on March 3, 1865 (13 Stat. 507)... The Bureau was responsible for the supervision and management of all matters relating to refugees and freedmen, and of lands abandoned or seized during the Civil War ... While a major part of the Bureau's early activities involved the supervision of abandoned and confiscated property, its mission was to provide relief and help freedmen become self-sufficient. Bureau officials issued rations and clothing, operated hospitals and refugee camps, and supervised labor contracts. In addition, the Bureau managed apprenticeship disputes and complaints, assisted benevolent societies in the establishment of schools, helped freedmen in legalizing marriages entered into during slavery, and provided transportation to refugees and freedmen who were attempting to reunite with their family or relocate to other parts of the country. The Bureau also helped black soldiers, sailors, and their heirs collect bounty claims, pensions, and back pay."

How Was It Organized

There were many layers to the Freedmen's Bureau organization. You had Federal-level administration and bureaucracy and then each state had its own bureaucracy. For example, in North Carolina, there were originally four districts (New Bern, Raleigh, Wilmington and Goldsboro) divided into sub districts. On July 1, 1867, the basic unit of organization for North Carolina was changed to the sub district, of which eleven were established. Each sub district would then have a small number of subdivisions. The organizational structure was again changed on March 1, 1868, when the state was again divided into the four sub districts -- Morganton, Wilmington, Raleigh, and Goldsboro, with provisions for smaller subdivisions in each sub district. By May 1869 all of the Bureau offices and functions except education, were phased out in North Carolina. (Source: M1909 - this is the source for all subsequently quoted material)

The key is to remember that the Freedmen's Bureau was established in the War Department. As with all Federal records, it is always important to know why, when, and where something was established. This knowledge is critical and directly influences how the entity operated, what records were kept and how they are organized.

This knowledge will help facilitate you efficiently and effectively identifying which records you may want to examine and then how you will do so.

Not all field offices operated for the duration and not all field offices performed the same functions. And, the finding aids for the microfilmed collections for each state tell you explicitly what records are extant for each field office, sub district office and other entities as you move up the "chain of command" within the Freedmen's Bureau within each state and then at the Federal level.

Before you start researching into the records, do your homework regarding particular states and/or the various collections of this very large record group. A list of resources at the end of this piece will tell you more about the history, organization, record availability and much more.

This edited list gives you a sense of "some" of the records you might find listed for a certain office. Bolded items are probably of the broadest use for genealogical research though all of these documents types can be useful. Look at the example images for some of these "types" of records.

Besides rations which were critical as the Freedmen's Bureau commenced operation, a big area of concern was the regulation of written labor agreements between planters and freedmen. Essentially, freedmen were free to bargain with their prospective employers though it was strongly suggested that both parties should sign written agreements in the presence of a Bureau official. This gave both parties some recourse for improperly dismissed freedman and freedman who did not satisfy their part of the contract. Apprentice arrangements were also still needed.

Do recognize that following the Civil War, "several Southern states, including North Carolina, enacted a series of laws commonly known as "black codes," which restricted the rights and legal status of freedmen." How involved the Freedmen's bureau could be with supporting the rights of the accused varied with time and the content of North Carolina law. As an example "Discriminatory clauses in the laws regarding the apprenticing of black children by North Carolina courts seriously hindered the Freedmen's Bureau's efforts to obtain justice for freedmen." It wasn't until the North Carolina Supreme Court rule in January 1867 that all apprenticeship contracts (regardless of the child's color) were "null and void" were some of these abuses addressed.

Basically, the Freedmen's Bureau had responsibility for almost everything you can imagine was needed after a devastating war as communities "picked up the pieces" and adjusted to a different state of affairs in terms of personal freedman than was experienced before the war.

What Else You Need To Know About These Records

Now that you are convinced that these records might help your research, there are a few things you need to realize about these records: 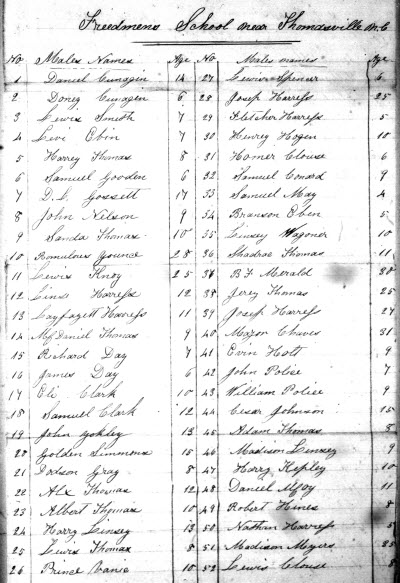 For each state, there is more than one collection of applicable Freedmen's Bureau records. For example, for North Carolina, one can find the following collections:

Besides the state-level NARA descriptive documents for the microfilmed collections of Freedmen Bureau records, here is a selected bibliography relevant to the mentioned collections: