Making Sense of the Census: The U.S. Federal Population Census

Census records have been kept by many countries and nations for centuries. While census records may record businesses, veterans, farms, or animals, a population census usually counts of every living person within a geographical boundary.

Why were census population records created in the United States?

Census records were created to help identify how much government representation each state should have in Congress, and required a count of all land-owning citizens throughout the country. In 1790 these records included only the names of the heads of household along with tally marks indicating the ages and genders of other members of the household. Starting in 1850, every person in the household was named, including their age, birthplace and other details. 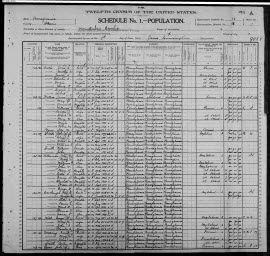 First, identify an ancestor born prior to 1930. It is helpful to know the state where they lived and/or the ancestor's approximate age in 1930, but not necessary. If the ancestor was female and not yet married, search for her first name and her maiden name if it is known. If the ancestor was an adult, search backward through each decade until the individual is young enough to be listed with parents or guardians. If the ancestor was a child, the search results may list the ancestor's parents and siblings living in the same household. Pay attention to where the parents were born and their ages.

Repeat the same process with the parents of the ancestor, searching until you find them listed as children with parents. To locate female ancestors' maiden names, locate marriage records for the mother and father. Look for the marriage record in the state and/or county where the oldest child was born.

Records for about 6000 individuals survived the destruction of the 1890 federal population schedule of the census, originally containing about 62 million individuals. Prior to the existence of the National Archives to house records, the 1890 census were stacked outside of a waterproof, fireproof record vault in the basement of the Commerce Building in Washington, D.C. They were severely damaged during a basement fire. While only 25% of the records were destroyed by fire, the remaining records were later destroyed due to severe water damage.

How do I search census records prior to 1850?

Only the names of the head of household are listed in census records between 1790 and 1840. This makes locating ancestors a bit more challenging, especially if an ancestor did not own land or was living with a relative or friend. The other household members are grouped by age and gender with tic marks indicating how many individuals fell in that age bracket. This can make earlier census records seem impossible to search.

Census records are protected by privacy laws that only allow public access to records older than 72 years. That means that in 2012, public access will be granted to the 1940 Census. You may request access to any census record (1940-2000) from the Bureau of the Census from if the person requesting the document is the person named in the census record, or is a proven heir or legal representative of that individual.

Why I can't find my ancestor in the census? I know this ancestor lived in the United States during the census years I am searching.

Many ancestors may have used variations of their names, or census takers may have listed the names incorrectly. Additionally, when census records were indexed, those indexing the records may have had difficulty reading the handwriting and may have transcribed an ancestor's name incorrectly. Here are some tips that may help you in your search:


Learn more about the U.S. federal population census at www.archives.com/census.