The 1940 census records give us a snapshot of America during that important time as the nation was recovering from the Great Depression and before entry into World War II. Because census records are closed for 72 years, April 2, 2012 is the first time these valuable records have been available to the public.

Archives.com has partnered with the U.S. National Archives to make the 1940 Census available for free online. The images are available at 1940census.archives.gov.

"Archives.com is becoming part of history by assuming
this crucial role in the release of the 1940 census records."
--Megan Smolenyak2

Find your family in the census

Researchers are able to search for census images by location or enumeration district (ED). Users can utilize maps, enumeration descriptions, and other tools to find their family.

What will you discover?

Questions asked in the 1940 census include name, age, relationship to the head of household, birthplace, and education, residence in 1935, employment status, and wages. Also about 5% of people were asked an additional set of questions, including parents' birthplace, veteran status, occupation, and more. 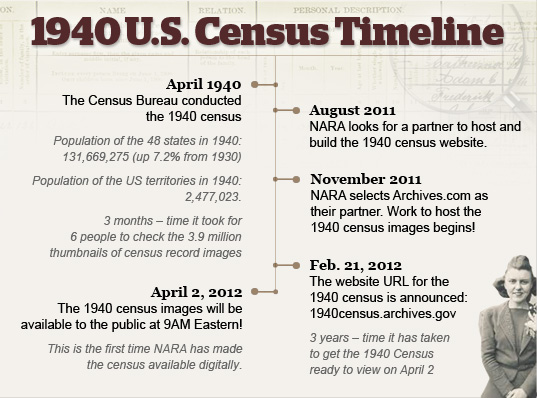 The American Family
Through Time

Behind the Scenes of the 1940 U.S. Census Release

1940 Census: Who We're Searching for and Why

"We're thrilled to be chosen by the U.S. National Archives to host the 1940 Census!"