Henry Louis Gates, Jr., is the Alphonse Fletcher University Professor and the Director of the W.E.B. Du Bois Institute for African and African American Research at Harvard University.
Learn More

Researching African American family history can be
very challenging. Many traditional research options,
such as census records, recorded only limited details
of African descendants - or none at all. At Archives.com,
we've partnered with Henry Louis Gates Jr., Director
of African American Research at Harvard University,
to show you how to learn about your family's history,
and even trace your roots back to Africa.

Tracing Your Ancestors From The Underground Railroad

The Underground Railroad (UGRR) was an informal network of individuals loosely organized to aid the escape of American slaves out of slave-holding states and into free Northern states, Canada and South into Mexico... Read More

Many genealogists are under the impression that all oral history interviews are the same. In most cases they are when you are asking questions using the five adverbs: who, what, when, how and where. But for most ethnic groups... Read More

View All Articles | View All Authors

Find your ancestors, discover new connections, and trace your family tree as far back as possible with Archives.com! Click the button below to try it for free! 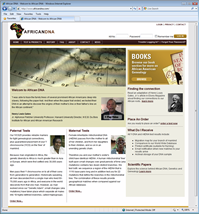 "I've traced the ancestry for several famous African Americans, including Quincy Jones, Chris Tucker, Oprah Winfrey, and Whoopi Goldberg. I helped create AfricanDNA.com so that when the paper-trail runs out, you can use advanced DNA sequencing technology to learn about your ancestors in new and truly remarkable ways."