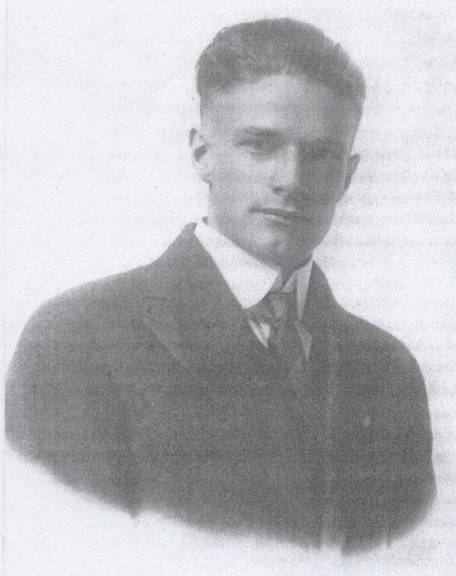 Sad to say, but Native American tribes did not have princesses either; chiefs and warriors, but not princesses. But since this is how many people get involved in genealogy, it is important to address it. Many people have the story of a female Indian in their line.

The only way to start any genealogy research is to begin with you. To begin researching the ancestor, no matter how recent or distant, is to waste time and possibly research a totally unrelated person! Regular genealogical research and valid documentation means proving your family back to the generation with the potential Native American ancestor. It will be important to document all the white family members including siblings. Remember that Native American blood may run in the veins of your cousins, but not yours if your great grand uncle married a Native American.

Once you have confirmed that you are indeed related to the ancestor(s) that might be Native American, what do you do? More research, of course, but this time more directed research. It is imperative that you identify a tribe. Indian Rolls are organized by tribe, so you MUST know the tribe before you can even start reviewing these materials.

An important principle of researching Native Americans is the location and the time period of the ancestor. Where and when was your ancestor living? Does it make sense that they would have contact with Indians and what tribe?

Remember that Native Americans in the eastern US had more direct contact with large numbers of whites for longer periods than tribes in the central plains and western areas. Also, although men in the backcountry such as trappers were known for taking Native American wives, there are usually few records of these marriages or even the woman at all. In the Colonial period, there were no written Native American languages. Remember that Cherokee was the first Native American language to be documented around 1830. Records were kept by whites about whites unless Indians and whites clashed, so for early records look for military reports. Missionary accounts and diaries are also helpful for information about tribes prior to the first US Census and sometimes they do reference individual Indians.

When starting with a new generation, look at the US Census if the time period is 1790 or after. Census records can pinpoint where your ancestor was located and when the children were born. Check the 1900 US Census which had a special Indian Schedule (available from 1885-1940) created where Indians were living on reservations and identified the color or race for the general population. Most Indian Schedules are now available online at a variety of genealogy sites.

If your family is from the Southeast and you are looking for an Indian ancestor after 1840, then the odds of proving Native American ancestry are less. The United States government forcibly removed the Five Civilized Tribes (Cherokee, Choctaw, (Muscogee) Creek, Chickasaw and Seminole) living east of the Mississippi to what is now mostly Oklahoma by the 1840s. Anyone left would not have many records identifying them as Native American, however, there are always places to look - wills, deeds, obituaries, newspaper articles and local county histories written after the time period may refer to Indian heritage.

For other areas of the country, it is necessary to determine the location of tribes and their history with the United States. What area of the country did your white ancestors live? What tribes are/were there? Some tribes are no longer in existence or merged with others due to disease and displacement. Were there reservations and government census and reports on the tribe? For example, if your ancestors are from the Northeast, then research local tribes like the Ononadaga Indian Nation of New York or if your family comes from Montana, look for Chippewa-Cree Indians of the Rocky Boy's Reservation. To see what tribes are likely for your ancestor's location, check out the National Congress of American Indians (NCAI) which lists tribes officially recognized by the US Government or by states.

Once a tribe is identified, check to see if there is a tribal web site, but be careful. There are two official Cherokee Tribes and Seminole Tribes. In the case of the Cherokees, the Eastern Band of Cherokee is in North Carolina and the other tribe is the Cherokee Nation of Oklahoma. Both tribes are descendants of the original Cherokees, but the Oklahoma tribe has descendants of Cherokees who were removed on the Trail of Tears or moved voluntarily out of their original homeland in what is now the Southeast United States. There are also several Cherokee offshoots not officially recognized, so use the NCAI web site to start your research of official tribes. 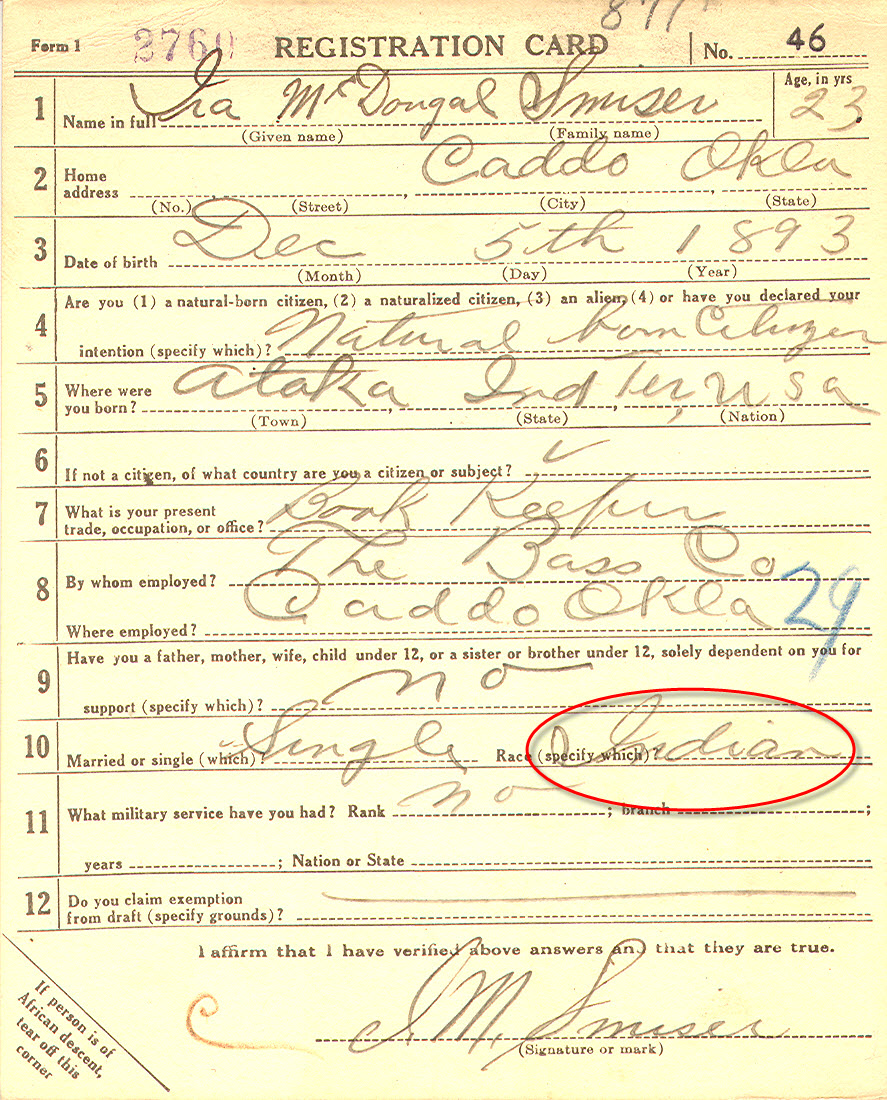 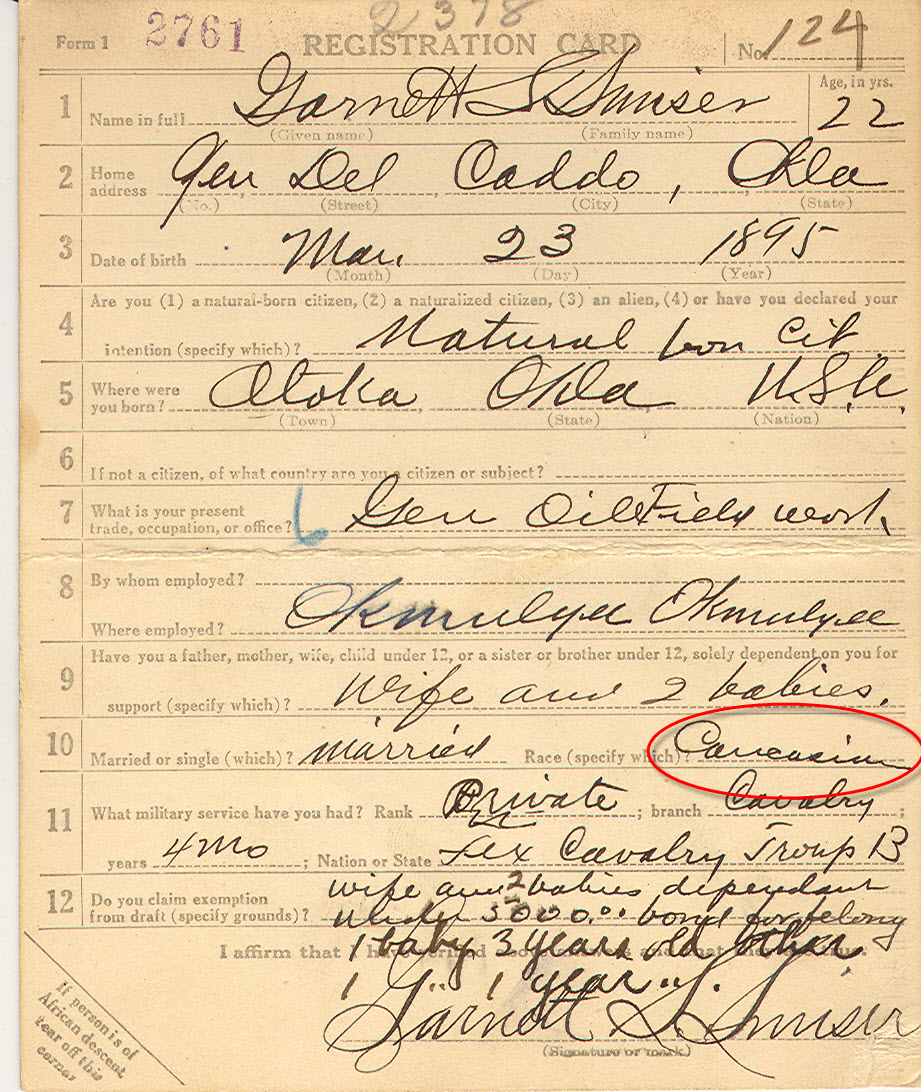 Once you have identified a tribe, there are many other records available. There were Indian Rolls (censuses) beginning as early as 1817 in the Southeast. Other records include Missionary documentation (reports and diaries) Indian Treaties and Bureau of Indian Affairs reports. Government rolls are for a variety of tribes, time frames and include locations throughout the US. Be sure to contact the specific tribe as many have genealogy records. National Archives and Records Administration (NARA) locations have microfilm on the Indian rolls and also other materials. These World War I Draft Registration cards from the NARA Atlanta branch Special Collections show two SMISER brothers in 191. Garnett listed Caucasian and his older brother is listed as Indian for race, but both are described as having red hair and blue eyes!

Never overlook state archives, historical societies and libraries for information because they might have that one piece of information needed. Also, check the web regularly as new material is always being added.

The 1830 Armstrong Roll in Mississippi found at the National Archives in Atlanta shows James STANLY (sic), a white man, on an early Choctaw census. His father-in-law, Turner Brashears, a Choctaw, is also shown further down on the same page.

Continuing to track the STANDLEY/SMISER family, they are listed in the late 1800s and early 1900s in Oklahoma on the US Census and in tribal records for a Norma Earl STANDLEY marriage, approved by the Choctaw tribe, to a white man named B. S. SMISER. A son, Garnett S. SMISER, was listed on the DAWES Roll under Choctaws by Blood with his mother and other siblings, Here is the Certificate of Indian Blood (CDIB) and a digital copy of the DAWES ROLLS from the National Archives website. 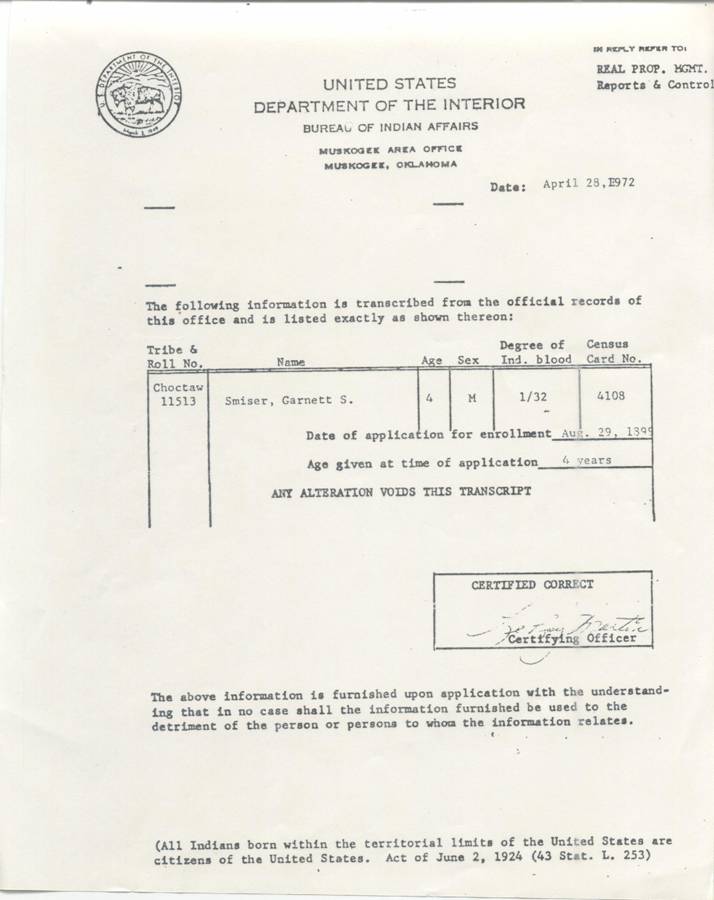 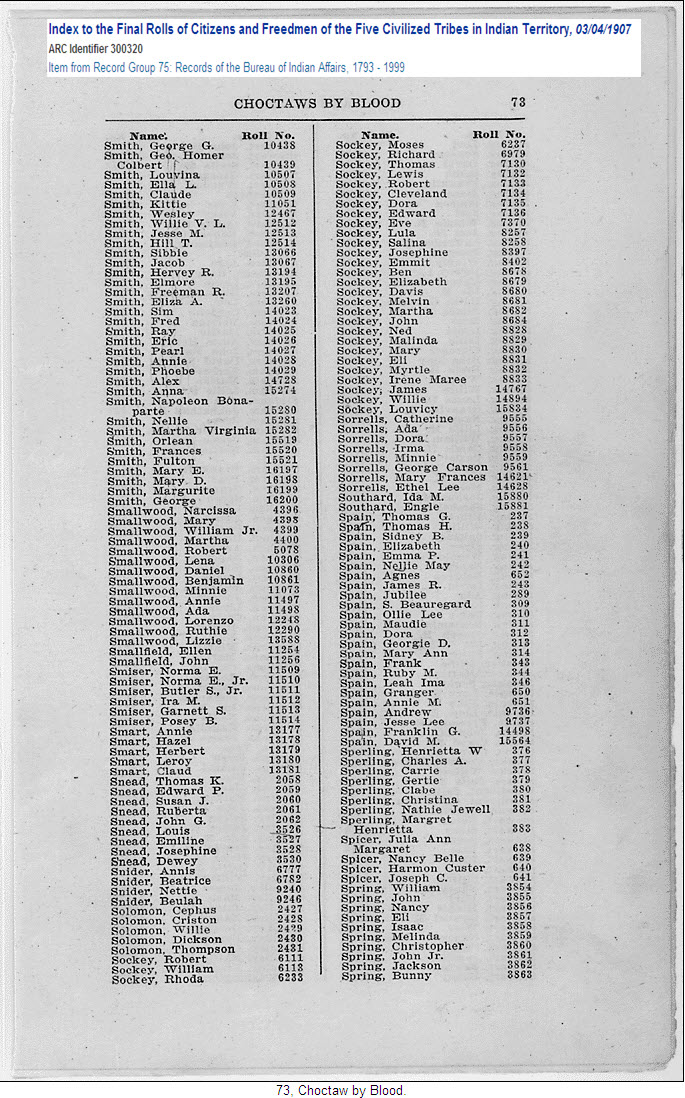 Keep searching for documentation and look for the siblings. If the WWI Draft Registration of Garnett SMISER is viewed alone without the benefit the additional documentation, what would the conclusion have been? 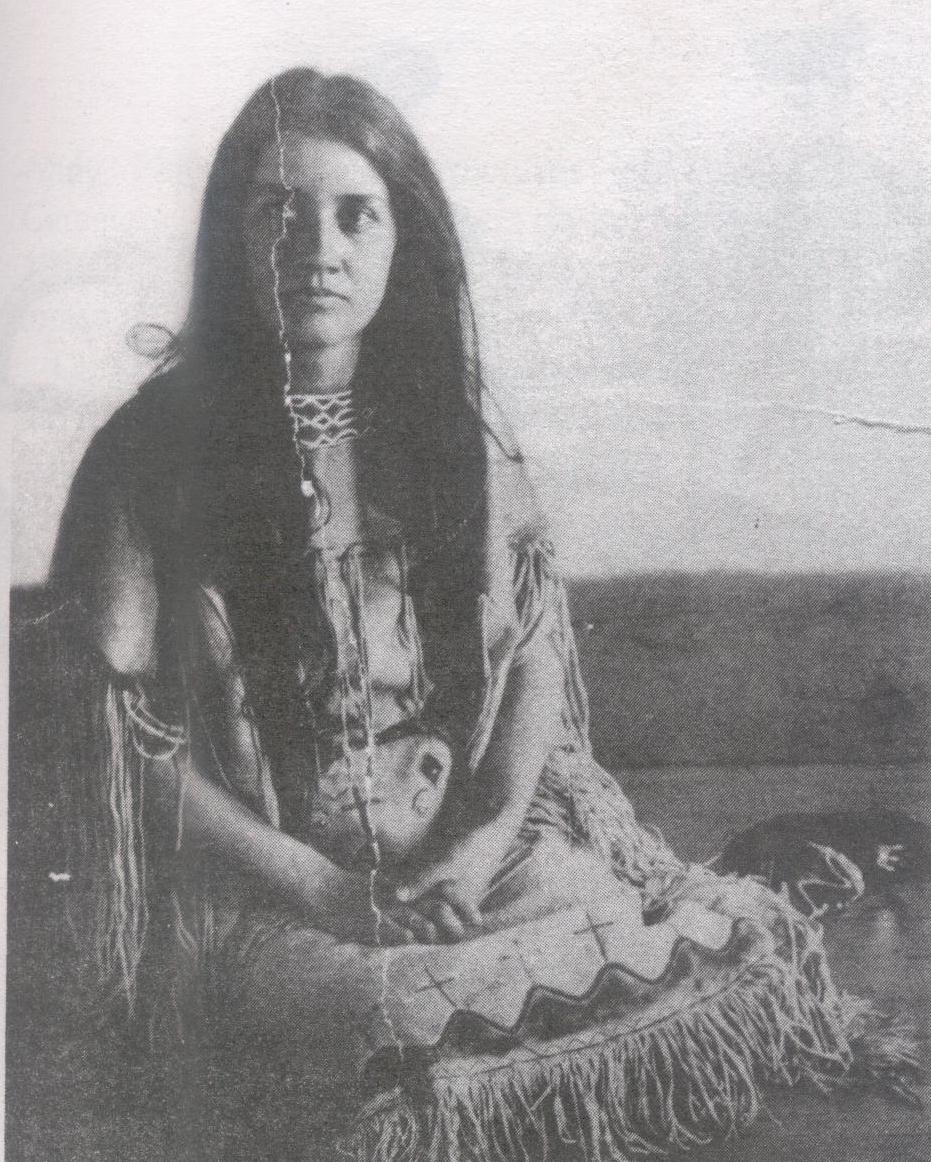 Now about that Indian Princess...by researching at the local library in Atoka, OK a newspaper article and county history titled Tales of Atoka County OK Heritage shows Norma Earl SMISER dressed in traditional Indian attire. In 1907, Norma was Miss Indian Territory, the 'bride' of Mr. Oklahoma Territory in the Oklahoma statehood ceremony in Atoka. Consider that she is the sister to Garnett and Ira SMISER; two red-headed, blue eyed brothers.

So begin with yourself and do regular genealogy research on all those family members. Once you identify the specific ancestor in specific tribe, your search is less of a needle in a haystack and more an ancestor treasure hunt. You never know what you will find until you look!