For over four hundred years the people of Spain have made their way to the shores of North America. It started with Columbus sailing on behalf of Spanish royalty. His voyages initiated the process of Spanish colonization as early as 1565 in Florida and 1598 in New Mexico. Since then there has been a continuous flux of immigration into the United States by Hispanic speaking peoples with genealogies that can be traced back to Spain.

Like any other genealogical search, the key to finding your Spanish roots lies in going from the known to the unknown. Once you have positively identified your immigrant ancestor in census or other records here in the United States, look for records that list a place of origin in the old country. Finding a parish of origin is absolutely critical to your search because records in Spain that will identify families and prove relationships were kept on a local basis--usually by village or parish.

One common twist for Spanish families immigrating into the United States is that most of them came first into a neighboring Spanish speaking country such as Cuba, Mexico or Argentina. Since 1820 only a handful of emigrants averaging around 2000 per year have come directly from Spain to the United States. The key to your parish of origin may well lie within the records of a neighboring country.

Start with family records to find your parish of origin. Believe it or not, this is your best shot! You may be surprised at the information your extended family members may have about your ancestor. Someone may have photos, letters, mementos or a family bible that may list a village in Spain.

After you have exhausted family records look for church records. Spain is predominantly Catholic and you may find your village of origin in a baptism, marriage or burial record in the Catholic Church records here in the United States. You may find it in the records of a neighboring country. Many of Mexico's parish church records have been filmed and indexed and can be searched on a country level. Other records that may help are birth, marriage and death certificates, obituaries, naturalization records, voter registrations, military pension files, passport applications or ship passenger lists.

Passenger lists that were published after 1892 give the place of birth of the traveler--and most usually a destination upon arrival which can also be helpful. If your ancestor was one of the many who came first to a neighboring Latin-speaking country, U.S. border-crossing records give the same information as passenger lists.

There are also records for emigrants leaving Spain. For those emigrating before 1790 there are passenger lists kept in the General Archives in Seville. The emigrant lists for the years 1500-1599 have been published and are available in most larger libraries here in the United States. Seventeenth and Eighteenth century passenger lists are available online through the Portal de Archivos Espanoles.

Locating the Parish within Spain 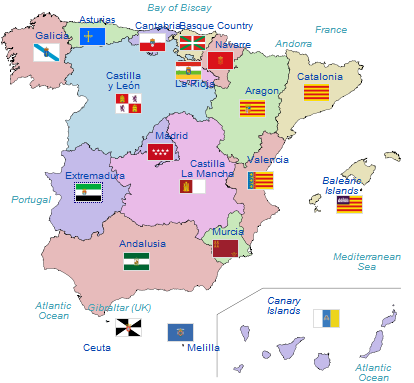 Once you find a parish of origin for your ancestor, the next task is locating the parish in Spain. A good Spanish atlas is a must. Places in Spain from smallest to largest: Lugar (village); municipio (municipality); parroquia (parish); and provincia (province). Any one or a combination of these could have been used by an ancestor when he was asked his place of origin. There are both civil divisions and ecclesiastical divisions in Spain, and the same place-name could have been used for both. If you don't find your ancestor in one, be sure to check the other.

There are about 23,000 parish archives throughout Spain that make up the 70 Catholic dioceses. The Guia de la Iglesia en Espa�a (Madrid: Oficina de Estadistica, 1951) is a published guide that breaks down each diocese by parish and tells when the records began for about 90% of the parishes in Spain. Over 30% of the parish records for Spain have been microfilmed and are available to order from any local family history center. Each of these centers are a local extension to the Family History Library in Salt Lake City, Utah. To see what has been filmed check the online catalog at Family Search by entering the name of the parish in a place search. If you find your parish has been filmed you can visit your local center to order the film for viewing.

Once you are in the parish records and have positively identified your ancestor, the chances are very good that the records in that same parish will take you back multiple generations through the records of your family. Baptism, marriage and death records kept locally through the parish church most often list the birth place of parents and sometimes grandparents. Marriage records will most likely show the name of the parish where both the bride and groom were baptized.

Spain has always kept impeccable records. If the church records for your parish did not survive, there are two comprehensive civil records that may help: notarial records and civil registration.

Notarial records are kept on a provincial level with but a few exceptions and are not unlike the county records kept in any local courthouse in the United States. Here one can find legal records such as wills, estate records, civil marriage contracts and records dating back literally hundreds of years.

After 1870, civil registration records in Spain are some of the best in the world because of the amount of family detail found in them. There are also a few earlier civil registers covering the years 1839-1869 available on a municipal level. Civil registration records have not been filmed, but if you are lucky enough to pinpoint a parish or municipality for your ancestor, you can write to the local court (juzgado) for a copy. There is a 2-6 month turnaround for a reply.

As extensive as both Notorial and civil registration records are, they can sometimes be difficult to use--especially for the beginner. Keep in mind that if parish records have survived there will be enough detail in the records to take your family back generations. But it is nice to know that if you need to verify information in the parish record these government records can help.

In the end, the entire research process in Spain hinges upon a parish of origin for your Ancestor. With a little perseverance, even the novice researcher should have success finding several generations or more using local parish church and government records. Caza feliz!