The Cold War is a term used to describe a tense relationship primarily between the U.S. and the Soviet Union that never resulted in any direct warfare, but did result in many crises. Cold War records are mostly comprised of Cold War newspaper articles that describe the tensions and conflicts that arose between the two countries from 1945 up through 1980.

Also prevalent in Cold War newspaper articles is the fact that America would often provide ally countries with supplies for wars fought against enemies allied with the Russians. Although America and the Soviet Union fought together during World War II, their short-lived alliance was simply due to a mutual enemy, and the two nations were never friendly.

The Cold War newspaper articles tell the story of two nations who never trusted each other, especially after America dropped the atomic bombs on Japan. The Soviet Union was desperate to keep up in the arms race, and poor communications led to various conflicts throughout Europe and America.

1945: The U.S. dropped atomic bombs on Hiroshima and Nagasaki. This made the Soviets nervous, especially after learning of the vast destruction caused, because the Soviets didn't have this technology.

1956: Hungary revolts against the Soviet Union, and the Suez Crisis occurs.

1961-1962: America sends military aid to South Vietnam in 1961, who was fighting against North Vietnam, supported by the Soviets. The Berlin Wall is erected by the East Germans. In 1962, the Cuban Missile Crisis was almost the first nuclear war fought between the U.S. against Cuba and the Russians. An agreement halted any actual fighting, but it was a close call.

The Ruston Daily Leader printed its Cold War newspaper edition on November 24, 1948, with the major headline "Experts Say Berlin Blockade Is Backfiring." The Berlin Blockade was one of the first major conflicts of the Cold War and occurred post-World War II when several nations occupied Germany. The blockade in the Cold War newspaper referred to the Soviets blocking roads and railways used by the Allies to access Berlin because the Soviets wanted to control the city. 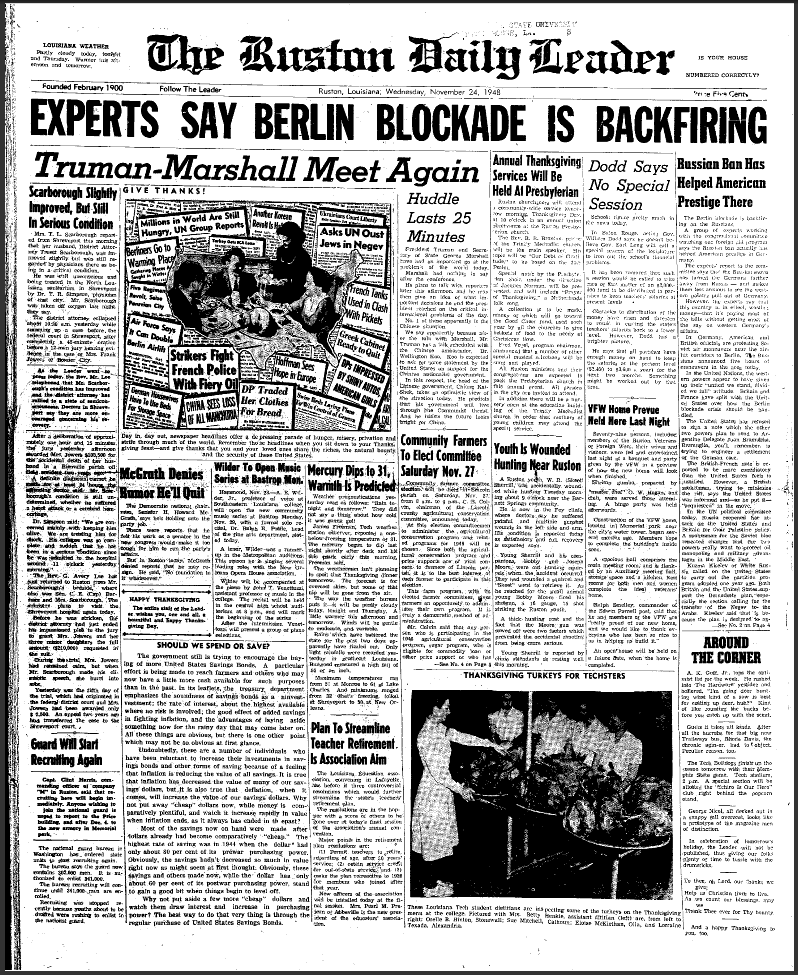 When the Cold War newspaper said that the blockade was backfiring, it meant that the U.S. became more popular among the German citizens. Despite the blockade, which meant that the necessary food, drinks and first aid supplies weren't getting to Berlin, the Allies formed the Berlin Airlift, which carried vital supplies to Berlin using the U.S. Air Force and Britain's Royal Air Force. Together, these nations flew over 200,000 flights and dropped much needed fuel and food supplies.

The Cold War newspaper account also cites that Germans were turning away from the Russians and didn't want the Western Allies to pull out of Germany and leave them to the Soviets. However, this Cold War Newspaper account also cites that the union of the Western Allies, with the slogan "United we stand, divided we fall", is over because France and Britain disagree with how the Berlin Blockade should be handled.

Also reported in this Cold War newspaper is how President Truman and Secretary of State Marshall had another huddle to discuss international affairs, including the Chinese situation. The Chinese Ambassador wanted President Truman's support for the Chinese Nationalist Government in hopes of keeping communism out of China.