D-Day records are mostly contained in the many D-Day newspaper articles written about this historic day in World War II. This battle was the beginning of the end for this war, which had already taken the lives of many soldiers and civilians. D-Day newspaper articles mostly discuss the first day of this epic attack by Allied forces on the Axis Powers on June 6, 1944.

The Allied forces planned a clever battle plan that had two parts. They planned to continue their attack on Nazi-occupied Soviet land in the east, but to simultaneously begin an amphibious invasion from the west on the coast of Normandy, in Nazi-occupied France. On what came to be known as D-Day, Allied troops (predominantly American and British) sent out thousands of ships, planes and tanks across the English Channel toward the beaches of Normandy.

D-Day newspaper articles described how troops bravely invaded the heavily guarded Normandy coastline that day, and by the end of the day, Allied troops had made important headway towards overtaking Hitler's armies. D-Day records specific to this day list which divisions participated, as well the order of divisions and troops.

1:00 am: Allied paratroops and glider units are dropped behind German lines along the beach of the Normandy coast, ranging from Caen through Ste. Mere-Eglise beach.

3:30 am: Assault troops start loading onto flat-bottomed boats from the main ship and ride the rough seas towards Normandy.

5:58 am: Dawn comes to Normandy, and 702 Allied warships start firing towards the German-guarded coast.

6:30-Noon: The battle for Omaha beach was one of the most difficult and bloodiest. The beach was riddled with obstacles, with German soldiers firing on higher ground towards the soldiers wading in from the sandbar about 100 feet from shore. Once on shore, it was another 200 yards to reach cover. It took hours and much bloodshed, but the Allied troops reached the bluffs and defeated the Germans.

7:30 pm: The Germans hadn't surrendered, but the Allied troops had secured the German posts along the coastline, just not enough inland to avoid German artillery attacks on unloading points.

The Clearfield Progress newspaper published in Pennsylvania had most of their front page on June 6, 1944 devoted to D-Day. This D-Day newspaper edition began with the main headline "Invasion Is On" and then proceeds to list the secondary headlines, including "Beachheads are Established." This D-Day newspaper also details in bold letter that 4,000 ships and 11,000 aircraft are deployed for the Normandy Invasion into Nazi-occupied France. 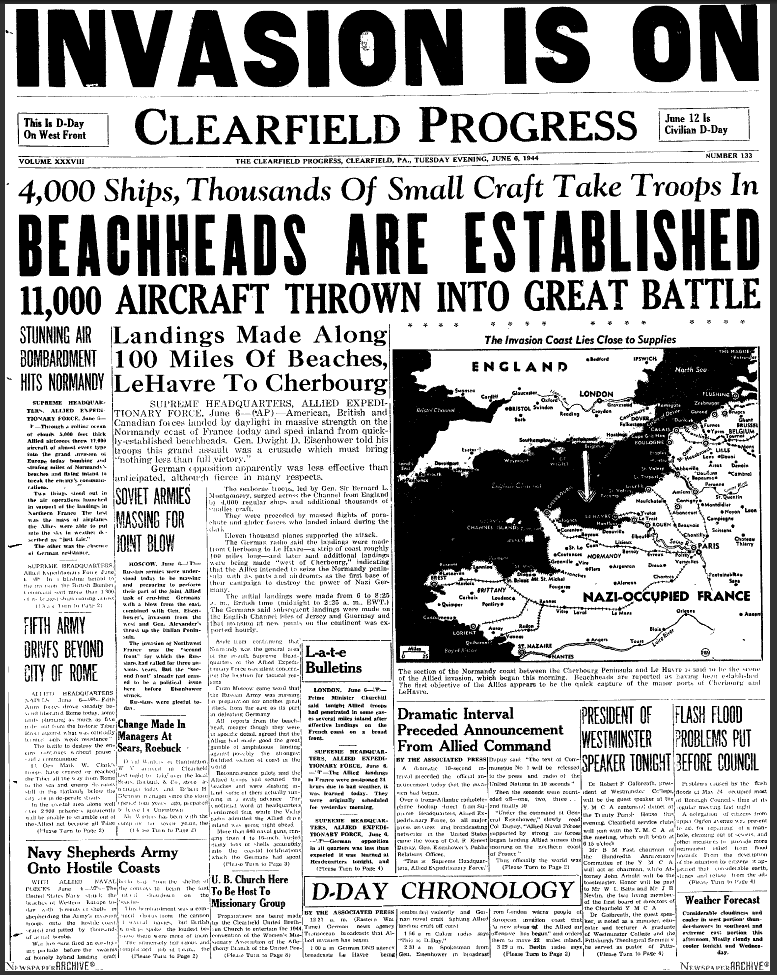 Another D-Day newspaper article describes the dual nature of the planned attacks and outlines how the Russian armies were busy preparing to demolish Germany from the east. This was in conjunction with General Eisenhower's troops invading from the west and General Alexander's troops coming up through the Italian peninsula.

This historic D-Day newspaper article also provides a late bulletin that reveals that the D-Day attack was originally scheduled for the previous day, but was postponed due to bad weather. Despite the postponement, the seas were still rough on the troops crossing the English Channel early on June 6. Also, German resistance was reported to be less than expected, although this was partly due to Hitler being asleep when reports of Allied attack were first heard by the Germans. Hitler, who hated to be woken up, was not notified in time to approve a course of action. The Allied troops were also reported to have liberated Rome from the Nazis and had triumphantly crossed the Tiber River.