The Korean War began on June 25, 1950, and it lasted until an armistice was signed in July of 1953. It was a fight stemming from Korea being split into North and South Korea after the Allies emerged victorious in World War II. From 1910 until 1945, Korea was ruled by Japan, and when World War II ended, the U.S. split the peninsula, with the U.S. occupying the south and the Soviets occupying the north. During the war, North Korea was supported by China and received military aid from the Soviet Union, while South Korea was supported by the U.S.

1948: The Korean peninsula was divided along the 38th parallel, but rising tensions between the north and south and their inability to successfully hold a free election resulted in North Korea breaking off to form a communist government.

1951: The May Massacre was one of the bloodiest battles of the war and began with a debilitating surprise attack by the Chinese and North Korean forces, killing U.S. and U.N. troops before they were able to rally and bombard enemy troops from the air.

1953: Armistice is signed, and the Korea Demilitarized Zone was established along the border of North and South Korea.

The San Antonio Sunday Light's June 25, 1950 Korean War newspaper edition featured the large headline "Red Korean Forces Invade South." This headline signified the beginning of the Korean War, which began when North Korea, backed by China, invaded South Korea. Another Korean War newspaper article said that this was the beginning of a civil war between the two territories as North Korea sent 60,000 troops into the south. 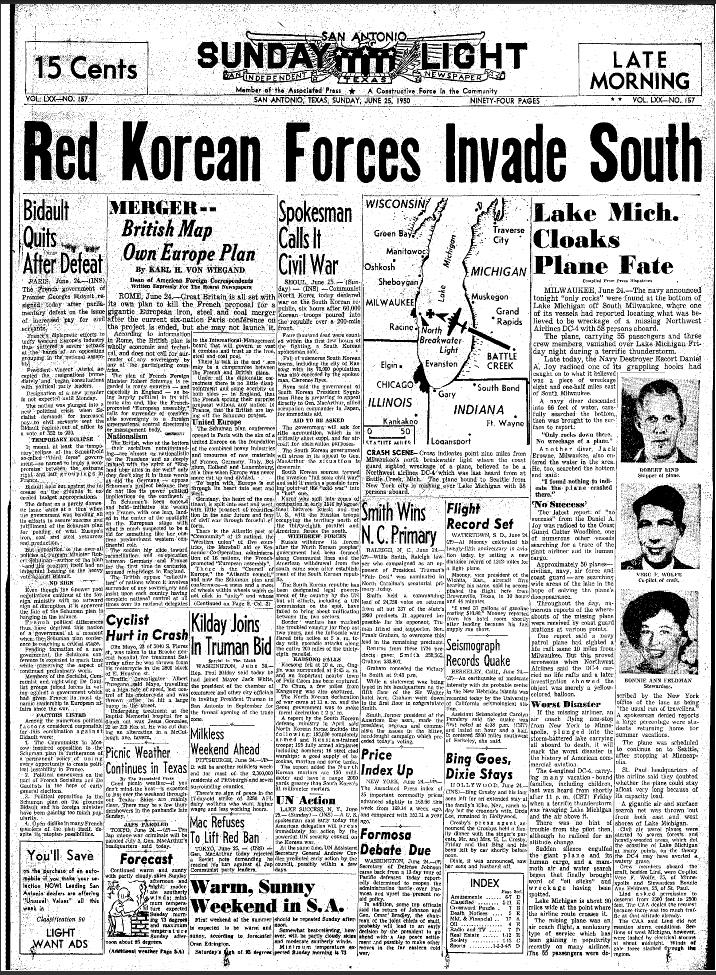 The Korean War newspaper also discussed the fact that South Korea planned to request aid from the U.S., specifically from General MacArthur, who was the occupational commander for Japan from the end of World War II. South Korea planned to request rifles and ammunition, along with aircraft to observe the enemy forces. The South Korean government also reported that this invasion turned the Cold War into a hot one and stressed that the invasion must be taken seriously.

This Korean War newspaper edition also outlined how South Korea was designated the legal government for the entire peninsula, but the North would never concede. South Korea's government went on to describe that North Korea boasted 195,000 Russian-trained troops, along with 16 steel warships, 195 armed planes (some of which were bombers) and a hefty supply of tanks, mortars and bazookas. South Korea also claimed that the North's mortars had a longer range than the South's.

Finally, this Korean War newspaper edition talked of several South Korean cities that had already fallen to the North, including Kaesong, Po Chun, Paik Caom and Ongjin. A strong response from the U.N. Security Council and help from the U.S. was urgently requested by the South Korean government. This would be granted in coming days, as the U.N. didn't want communist North Korea to become another Nazi Germany who would begin attacking neighboring countries.