Moon landing records consist largely of newspaper and magazine accounts describing the events leading up to this monumental accomplishment, along with descriptions of the actual event. Moon landing newspaper accounts refer mostly to the mission of Apollo 11, which reached the moon on July 20, 1969. Neil Armstrong and Edwin "Buzz" Aldrin, Jr. were the first humans to land on the moon. Also important to Americans was the fact that this moon mission had beat the Soviets in the race to space.

Moon landing newspaper reports also describe the importance of beating the Soviets in the race to put humans on the moon. The Cold War was in full throttle during this time, and any way the Americans could beat the Soviets was considered a sweeter victory.

July 19, 1969: At 5:21 pm, the Apollo 11 flew behind the moon and prepared to enter lunar orbit. The crew made thirty orbits as the crew evaluated and located their landing point in the Southern Sea of Tranquility, which had been scouted as being flat and smooth.

July 20, 1969: At 10:39 pm, the Apollo 11 had landed on the moon, and Neil Armstrong opened the hatch to become the first man to walk on the moon's surface. He also activated a special television camera that was able to send feeds back to Earth for transmission of this important event.

July 24, 1969: The astronauts landed in the Pacific Ocean over 1,400 miles east of Wake Island and were picked up by the USS Hornet recovery ship.

The Bedford Gazette published the triumphant headline "Man Walks Safely on the Moon" in its July 21, 1969 edition. This moon landing newspaper article went on to describe, beneath a rendering of Neil Armstrong planting the American flag on the moon, how Armstrong's first objective was to turn on the television camera and his second objective was to plant the flag on the moon's surface. His famous quote, "That's one small step for man. One giant step for mankind," was reported in this moon landing newspaper article as Armstrong's first words on the moon. 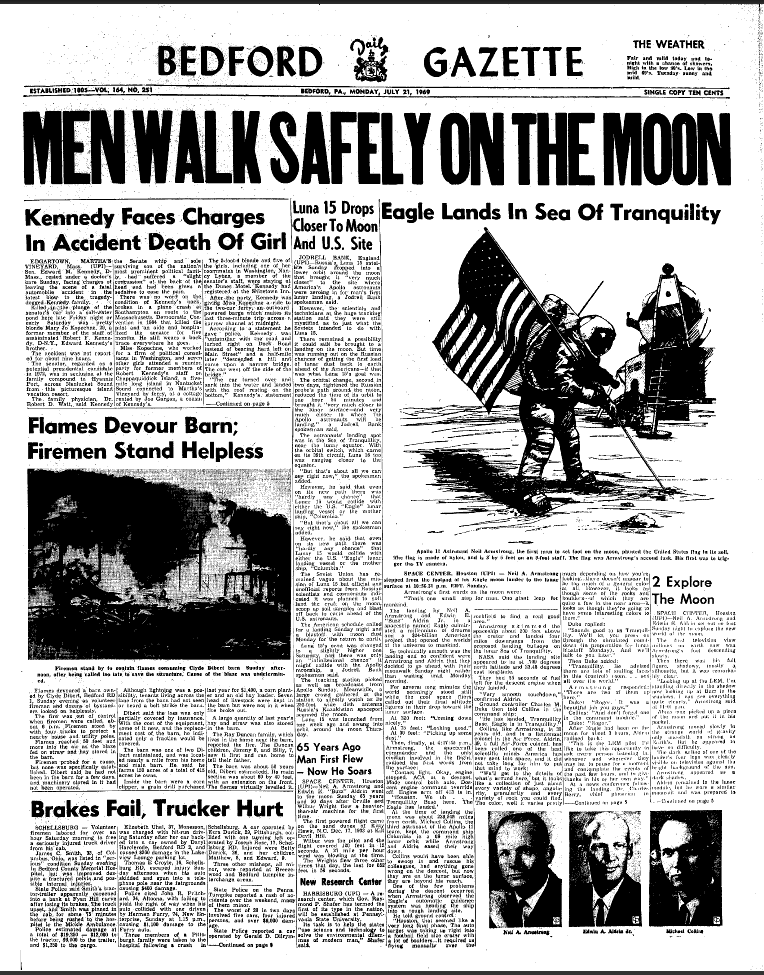 This moon landing newspaper article described the details of the moon mission, as well as the safety issues surrounding a human walk on the moon. Also detailed was the landing itself, how Armstrong safely piloted the vessel onto the lunar surface, which was dangerous. Another moon landing newspaper article described the television feed from the moon landing and how Americans were anxiously watching to see the first men walk on the moon. Although the images were shadowy and grainy, they were clear enough to cause excitement throughout the country.

Also reported in a moon landing newspaper article was the fact that the Soviet Luna 15 satellite was dropping its orbit closer to the moon and closer to the Americans' location on the moon. Scientists were reported as being confused as to the purpose of this maneuver. The Soviets simply wanted to be the first to bring lunar dust back to earth, since they were unable to put humans into space like the U.S. The moon landing newspaper article reported that time was running out for the Soviets to accomplish this goal. The Luna 15 was destined to a crash landing on the moon, however, just hours before Apollo 11 lifted off for home.