The attack on Pearl Harbor occurred on December 7, 1941, and it was a complete surprise, considering the U.S. had remained neutral in World War II. Pearl Harbor newspaper accounts described that shocking event for the record books and outlined how, within minutes of the Japanese attack, seven of eight battleships took major hits from bombs and torpedoes. Thankfully, the facilities, as reported by Pearl Harbor newspapers, remained mostly undamaged.

Later Pearl Harbor newspaper accounts reported the growing anti-Japanese sentiments rising in the U.S. in the late 1930s due to Japan fighting a bloody war in China, as well as sinking a US Navy gunboat. Leading up to Pearl Harbor, the U.S., along with Britain, East Indies and the Netherlands, formed an oil and steel embargo against Japan. Pearl Harbor newspaper accounts relate this embargo in August 1941 and detail how the American embargo in particular caused a major crisis in Japan.

According to Pearl Harbor newspaper accounts, Congress declared war on Japan the next day, and by December 11, had fully joined World War II, as Germany and Italy also declared war on the U.S. as Japan's allies.

January 27, 1941: The U.S. ambassador to Japan communicated to Washington that the Japanese were planning to attack Pearl Harbor, but no one believed the ambassador.

November 27, 1941: Admiral Kimmel and General Short received a "war warning" from Washington that described an imminent attack by the Japanese on the U.S. in the Pacific.

December 7, 1941: At 7:55 am, the Japanese attacked ships in Pearl Harbor plus the Hickam, Wheeler, Ford Island, Ewa Field and Kaneohe air stations. The attack continued for two hours and twenty minutes and resulted in 2,400 American casualties, 1,200 wounded, and over 300 aircraft and 18 ships damaged or destroyed.

December 8, 1941: U.S. Congress and President Roosevelt declared war on Japan, which was immediately reciprocated, and the U.S. entered World War 2.

The December 8, 1941 issue of the Manitowoc Herald-Times sported the headline "U.S. Declares War." The ensuing Pearl Harbor newspaper article reported how Congress reacted quickly to the Japanese attack the previous day, and it cited that Washington was admitting that over 3,000 Americans were wounded or killed during the attack. Washington also admitted that some damage was done to aircraft and naval ships, but official numbers weren't being released in that Pearl Harbor newspaper article. 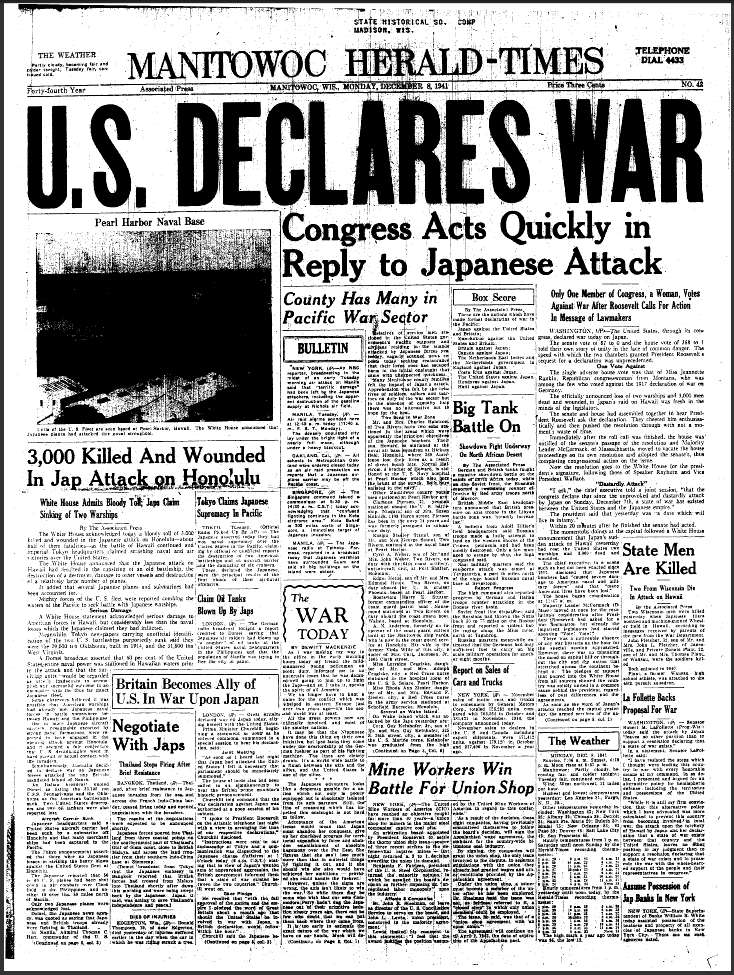