Prohibition was an amendment to the constitution that was added in 1920, but repealed in 1933. It consisted of making the transportation, sale and manufacturing of liquor or alcoholic beverages illegal. Prohibition records exist mostly through government documents and newspaper articles on the subject throughout its being on the books.

As a direct result of Prohibition, the average American would break the law when having an alcoholic drink. Prohibition newspaper accounts tell the story of underground speakeasies, where rebellious folk would gather to drink liquor and speak their mind. This also gave way to the prevalence of gangsters, who made a lot of money selling illegal alcohol.

Prohibition newspaper accounts also detail how the Prohibition came about, beginning with Temperance Groups in the nineteenth century that called for moderation in drinking, which was blamed on causing a rise in crime and accidents in the workplace. However, Prohibition newspapers also pointed out an important loophole in the law, namely that alcohol could be consumed if prescribed by a doctor.

1916: Almost every state had Temperance organizations and statutes that prohibited alcohol consumption.

1919-1920: The Volstead Act, passed on October 28, 1919, clarified the 18th amendment that prohibited all beer, wine, malt liquor or vinous liquors from being manufactured, transported or owned. Since the law didn't go into effect until 1920, many people stocked up a personal supply while it was still legal.

1932: Herbert Hoover, during his run for president, gave speeches against prohibition.

On November 8, 1933, the Salt Lake Tribune ran the Prohibition newspaper headline "Utah Swings Nation to Repeal as Wet Forces Lose 2 States." This Prohibition newspaper article discussed how the various states voted to repeal the 18th Amendment that was the Prohibition. Ohio and Pennsylvania were reported to vote a large majority for repeal, known as wet states. North and South Carolina remained dry states and voted against repeal. Thirty-three states had already voted to repeal Prohibition, and Utah helped swing the vote towards the wet states. 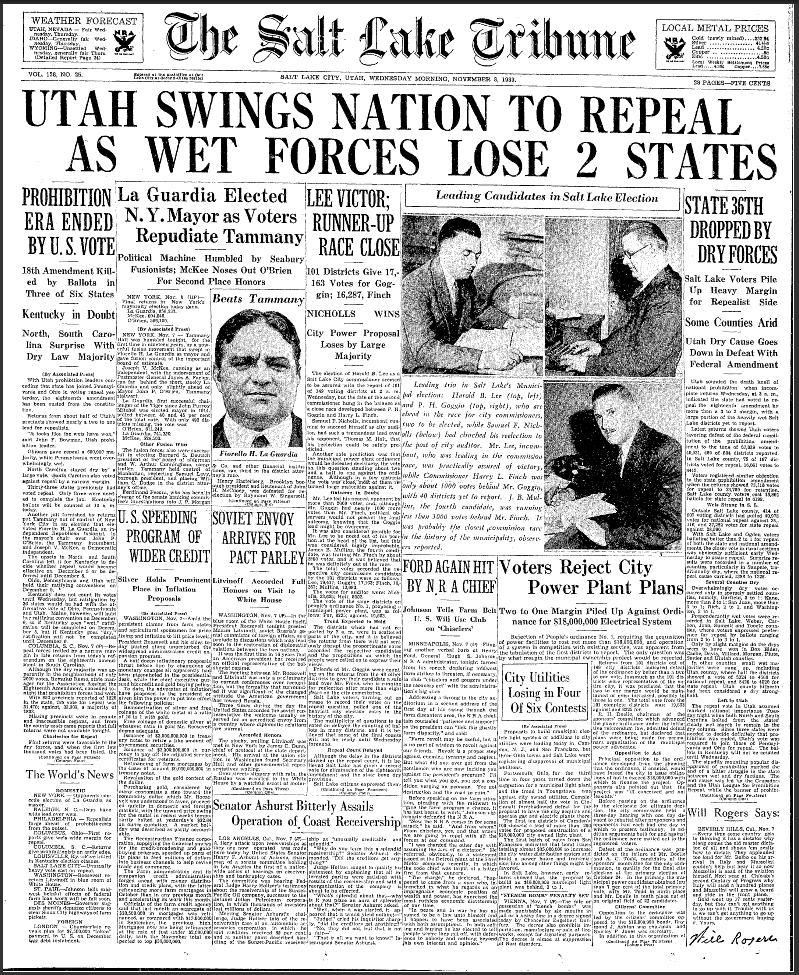 Since both North and South Carolina voted dry, it was up to Kentucky, according to this Prohibition newspaper article, whether the repeal would be ratified on December 5 or deferred to the 6th. Maine had deferred its ratification convention until December 6, meaning that if Kentucky voted dry, ratification would be delayed one day.

Also reported in a Prohibition newspaper article was the fact that the predominantly wet Salt Lake City helped put Utah's repeal vote at a 3 to 2 margin, with several areas of Salt Lake City, which is dominantly wet, yet to report final vote counts. These wet votes would overshadow the outlying dry areas or "arid counties" of Utah and help repeal the 18th Amendment fully from federal law. With the other states having voted and the surprising dry votes from the Carolinas came in, Utah was needed to join Ohio and Pennsylvania in order for the repeal to take place. This Prohibition newspaper article also talked of the continuous battle fought between those for the repeal and those opposed.