Stock Market Crash 1929 records exist mostly as newspaper and magazine accounts written before, during and after this historic day in October. Stock Market Crash 1929 newspaper editions explain that, leading up to this day, an atmosphere of confidence and economic prosperity was bursting in post-World War I America. Big inventions like the radio and airplanes gave people confidence, and booming business encouraged Americans to take their savings and invest it in the stock market in the 1920s.

Stock Market Crash 1929 newspaper accounts leading up to Black Tuesday, or October 29, described the stock market as an infallible investment for the future. In 1925, stock prices started to noticeably rise and gave way to a bull market in 1927. In 1928, the stock market became a place to get rich overnight as the boom continued. People without money to invest started buying on margin, meaning they borrowed 80 to 90 percent of the stock price, betting it would go up in price.

When the stock market started to decline in 1929, after many banks had invested client money in stocks without consent, several mini-crashes in early 1929 were followed by a summer boom and then the ultimate crash on October 29, 1929. It also started the Great Depression.

1925-1926: The stock market started catching on as a great way to make fast money as stock prices began to level out and then rise. More people and businesses started investing in stocks.

March-August 1929: On March 25, there was a mini-crash and subsequent panic until bankers like Charles Mitchell assured customers that money would still be lent. This mini-crash was followed closely by reduced steel production and a slowing down of car sales and new home construction. June through August saw the stock market hit its highest peak.

October 1929: Stock prices started dropping in September, and on October 29 (known as Black Tuesday), over 16.4 million shares of stock were sold in a nationwide panic that plummeted share prices. 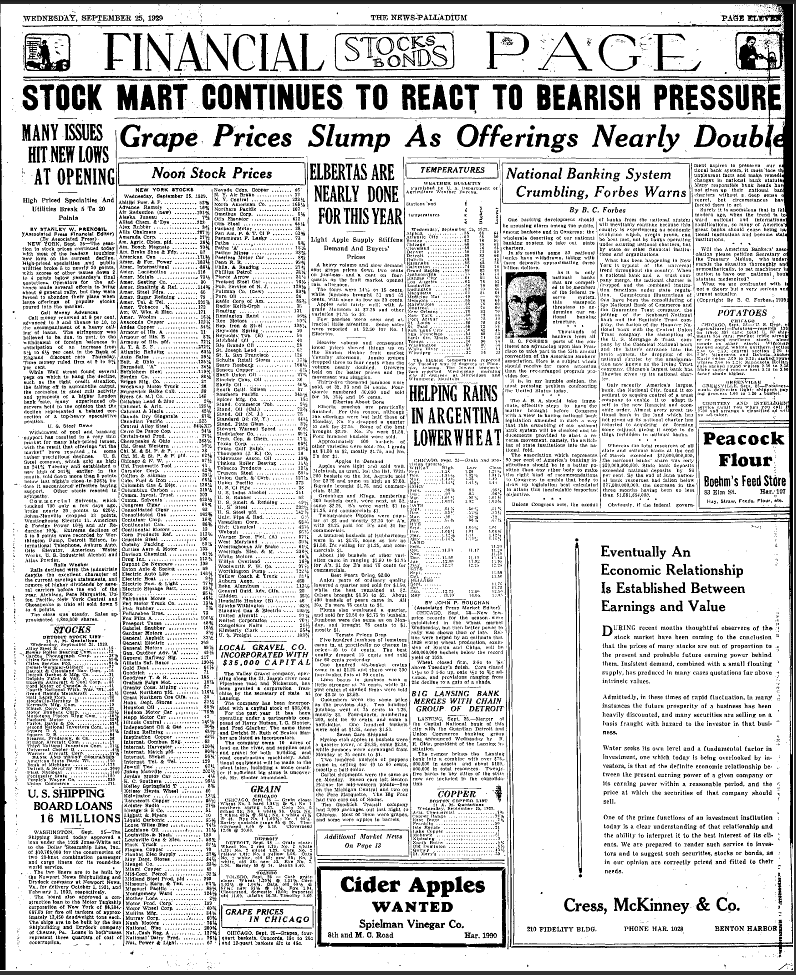 The Stock Market Crash1929 newspaper edition published on September 25, 1929, by the News-Palladium, indicated that stocks were continuing to experience bearish pressure. The stock news reported by this Stock Market Crash 1929 newspaper talked about how the national banking system was failing, citing that within the past six months, over 80 national banks had withdrawn over $3 billion. This Stock Market Crash 1929 newspaper also talked of how national banks were deserting their state charters in favor of merging with trust companies. Examples cited included the merging of the National Bank of Commerce with Guarantee Trust Company, the Hanover National Bank with Central Union Trust Company, and the Chemical National Bank with the U.S. Mortgage & Trust Company.

Also mentioned in this Stock Market Crash 1929 newspaper edition was the fact that prices of grapes lowered while offerings doubled. That was an important indicator that the stock market had artificially high prices that did not accurately reflect the actual business or product profitability, which came true when the stock market experienced the major crash in October. The rest of the fruit market was also discussed, with prices being down on tomatoes and apples.

Other areas reported as declining in this Stock Market Crash 1929 newspaper edition include the price of steel and commercial solvents going down, as well as railroad stocks. Wall Street reported reasons for these declines that included tight credit, reduced car output, possibly higher London bank rate and the falling of steel production. The market was promised to rally, however.

The Tyrone, Pennsylvania newspaper Tyrone Daily Herald was force to print the headline "All Records Shattered in Frenzied Stock Market Trading" when its October 29, 1929 edition hit the stands. The Stock Market Crash 1929 newspaper articles all centered on the horrible yet inevitable crash that helped lead America into the Great Depression. 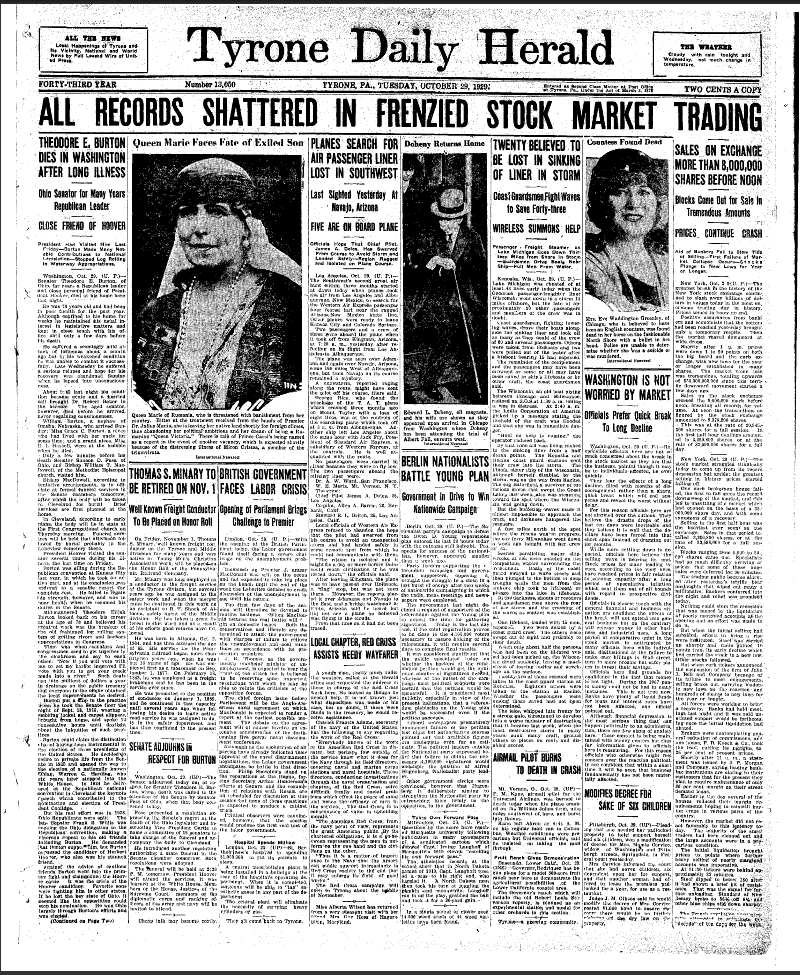 As prices were crashing, the Stock Market Crash 1929 newspaper article reported that over eight million stocks had been sold by noon with no sign of slowing down as prices continued to plummet. In fact, the record would be set that day, with more than 16 million shares being sold on what would become known as Black Tuesday. A reported $50 billion was lost in the stock market combined over the past few days. Despite bankers and economists assuring people that the crash was over, it continued to happen.

Also discussed in this Stock Market Crash 1929 newspaper article was the fact that brokers were having difficulty determining pricing for sales, especially lump sales up to 50,000 shares, and this had deferred many sales by as much as 30 minutes and climbing. The public was reported to have started panicking after many millionaires were wiped out on October 28, especially after poorly managed accounts were called due to poor lending on margin to stock market speculators.

Panic resumed, according to this Stock Market Crash 1929 newspaper article, after the John J. Bell & Company was suspended due to a failure to meet engagements. Despite some trying to rally the market by cutting margins and buying steel and radio stocks at higher prices, these efforts were not enough to sustain a rapidly failing market, and the crash continued.