The Titanic is historically remembered for being the unsinkable ship that sank on her maiden voyage in April 1912. Titanic records mostly consist of plans for the ship, information on how the ship was built, as well as passenger manifests, which are deemed incomplete. Other Titanic records are largely made up from eyewitness accounts and stories and journals passed down in families whose ancestors were part of the Titanic voyage.

Titanic records prove that the ship was the largest one ever made back in 1912. Titanic records also show that the ship cost $7.5 million to construct and was made by Harland and Wolff in Belfast, Ireland. Over 14,000 men helped build this epic ship over three years, and the Titanic was advertised to be the most luxurious and safest floating 5 star hotel, sporting the first swimming pool on a cruise ship.

Titanic records show the ship sailed safely from Belfast to Southampton, England, where it was docked until its maiden voyage was set for April 10, 1912. After only four days at sea, the Titanic hit an iceberg and sank on April 15.

April 2-3, 1912: The Titanic sailed from Belfast, Ireland to Southampton, England in preparation for its maiden voyage across the Atlantic.

April 14, 1912; 11:40 pm: Quartermaster Robert Hitchens was steering the ship when the Titanic hit an iceberg. Prior to this, the Titanic had received multiple warnings regarding sightings of icebergs, but remained full steam ahead.

April 15, 1912; 12:00-12:25 am: Captain Smith is notified that all six watertight compartments are damaged, and the Titanic will sink in two hours. By 12:25 am, Captain Smith orders crew to start filling lifeboats with women and children.

April 15, 1912; 2:20 am: The Titanic breaks into two pieces and sinks below the ocean's surface, taking many passengers with it.

The Daily Review, published in Decatur, Illinois on April 15, 1912, unfortunately carried the important story of the sinking of the Titanic. This Titanic newspaper account revealed that aboard the ship's maiden voyage from England bound for New York were Mr. and Mrs. John Jacob Astor, Mr. and Mrs. Vanderbilt, Major Archibald Butt, journalist William Thomas Stead and Benjamin Guggenheim. 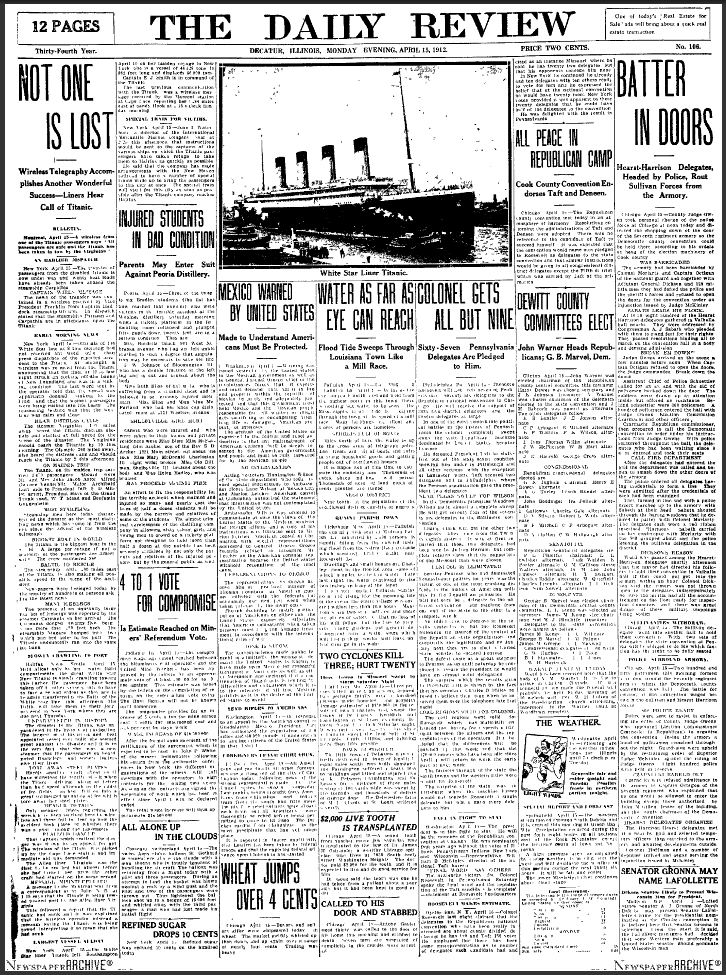 The main headline surrounding the sinking of the ship in this Titanic newspaper was the fact that wireless telegraphy had not failed, but prevailed since surrounding ocean liners were able to hear the Titanic's distress calls. Unfortunately, these liners weren't in a position to respond quickly enough to rescue the large amounts of lower class passengers and crew members that went down with the Titanic due to a shortage of lifeboats.

This Titanic newspaper account also described the basic, well-known facts of the time surrounding the Titanic, including that it was the biggest boat in the world. Also noted was the fact that an unusual amount of icebergs were reported in the area by other ships. Also written up was the fact that a special train designated for transporting Titanic survivors was being organized with the New Haven Railroad. Many of these survivors were taken to Halifax and would catch this train there.

This Titanic newspaper also displayed a photo of the Titanic prior to its fateful journey to the bottom of the ocean, but the majority of the front page is taken up with other news, both local and national, including the skirmishes that were taking place between the Republicans and Democrats.

The Trenton Evening Times published its Titanic newspaper articles on April 15, 1912, after learning initial facts from the tragic sinking. The main Titanic newspaper article described that the Titanic was due in New York the next day and was on course a day ahead of schedule, indicating high speeds, before it struck an iceberg. Also described was the general specs of that enormous ship, which was the largest ship ever built in 1912.