World War 1 started in 1914, after the Archduke Franz Ferdinand and his wife were assassinated by a Serbian nationalist. It ended in 1919 with the infamous Treaty of Versailles, which involved Germany taking full blame for the damage the war caused, the limiting of the German military to 100,000 men, the loss of all German colonies, and substantial reparations due to Allied Powers.

Also available are specific World War 1 records that detail African-American soldiers that fought in the war. Also part of the World War 1 records collection are photographs from the archives of the War Department. World War 1 records also exist regarding the Zimmerman telegram, which was intercepted and decoded in 1917 and led directly to the United States joining the war.

1915: The Germans torpedo and sink the British ship Lusitania off the southern coast of Ireland. The ship was carrying almost 2,000 civilian passengers, and this event increased tension between America and Germany.

1916: The Battle of Verdun begins in February and is the longest and bloodiest battle of World War 1.

1917: The Zimmerman telegram is intercepted by the British in January, in which Germany tried to lure Mexico to their side by promising them U.S. territory. The U.S. officially enters the war in April. 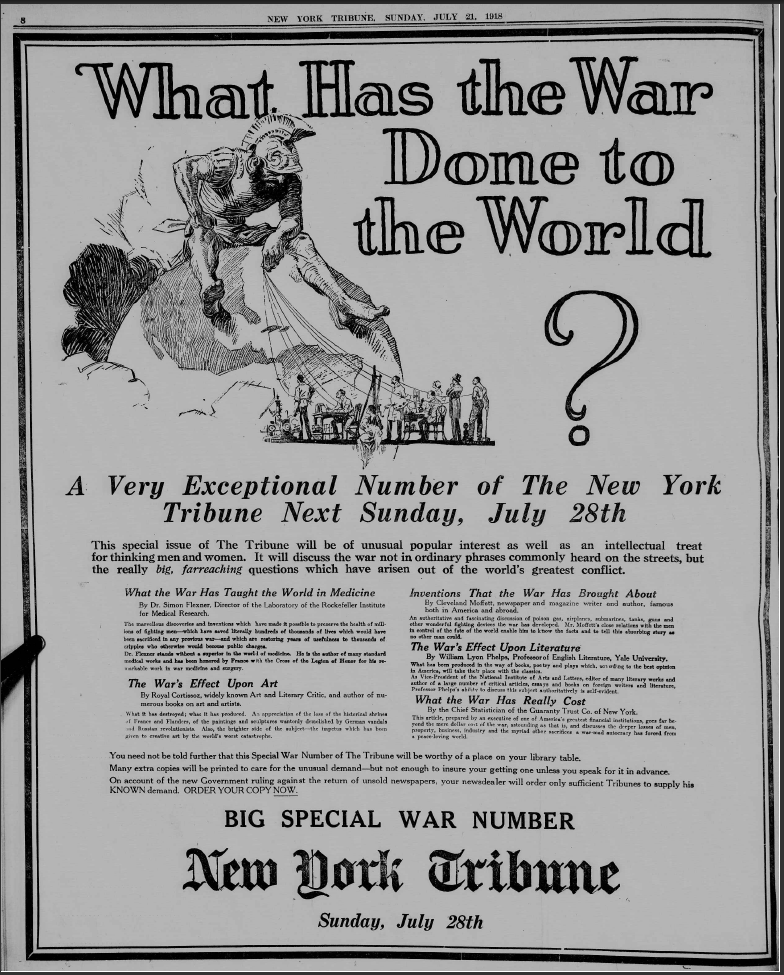 This World War 1 newspaper advertisement was published by the New York Tribune on July 21, 1918, in anticipation for the special war edition to be published the following week titled "What Has the War Done to the World?" Inside this special edition, the World War 1 newspaper featured articles answering questions like how the war has effected literature, the arts, and medicine. In addition, it discussed what the war is really costing and what inventions have been made due to the war.

This special World War 1 newspaper edition would specifically discuss and evaluate the many areas of American society that were influenced by the war. For instance, the New York Tribune touted that the advances in medicine, directly related to healing soldiers, was a positive effect, since these advances would have prevented many wounded soldiers from becoming cripples and public charges.

Also advertised to be discussed in this World War 1 newspaper edition are the weapons inventions first used in this war, including poison gas, tanks, airplanes, submarines and various types of guns previously unavailable during war. The war's devastating effect on some of Europe's treasured art and historical sites being destroyed is also a topic planned for the special edition, including losses of sculptures and paintings in France and Belgium destroyed by the Germans.

The advertisement for the World War 1 newspaper special edition also encourages citizens to order their copies in advance due to the government ruling for news agents against returning unsold newspapers, hinting that while extra copies will be made, they are likely to run out. Also intimated in the ad is that this World War 1 newspaper edition will be a keepsake.

This World War 1 newspaper article begins with an important war photo of the canine ambulance division of the French army, helping to rescue wounded soldiers from the battlefield. The headline reads "Real Dogs of War, Red Cross Aids, On Way to Battlefields Strewn With W

ounded." This World War 1 newspaper article was referring to the prevalence of canine units within the French army that were specially trained to identify and rescue wounded soldiers, often during battle when it would be too dangerous for another soldier to venture out in the open for the wounded.

These dogs were trained not to bark upon locating a wounded soldier, but to bring back a swatch of uniform to their kennel where surgeons would follow the animal back to the soldier with a stretcher. In cases of enemy fire making this trek too dangerous, the dog would drag the soldier to safety.

This World War 1 newspaper article also discusses the drug shortage about to hit Americans due to the war and was preparing Americans for higher drug prices. The drugs mentioned in this World War 1 newspaper article include opium, tartaric acid and quinine. Turkey was the main producer of opium, and the price was set to rise 55 cents per pound. France was the main supplier of tartaric acid, and quinine mostly came out of Germany. The war meant these medicine supplies would be greatly diminished, and limited supply meant higher prices for consumers.

Finally, this World War 1 newspaper article mentioned that a Mr. Arthur Huntington, President of the American Geographical Society, and his wife were arrested by the Germans as spies.