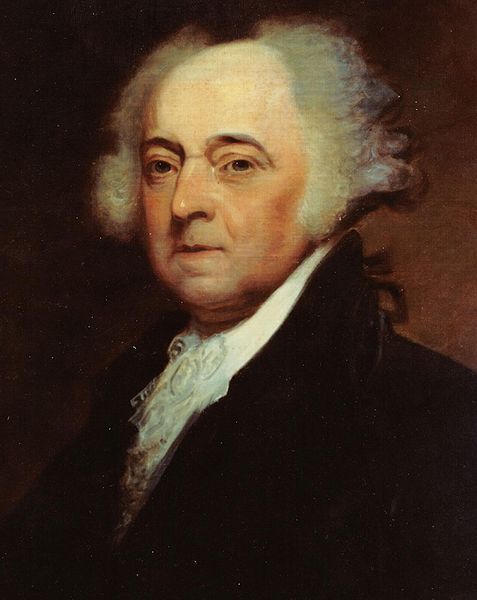 John Adams, Jr., first Vice President and second President of the United States, was born 30 October, 1735 (October 19 by the Julian calendar), in Braintree (now part of Quincy) Massachusetts. He was the son of John Adams, Sr., and Susanna Boylston Adams.

John Adams, Sr. (1691-1761), was the great-grandson of Henry Adams, who emigrated from Braintree, Essex, England to Massachusetts about 1640. John was a farmer and cobbler, but also a deacon in his church, a lieutenant in the militia and a selectman, or town councilman, who supervised schools and roads. He was often referred to as "Deacon John," reflecting his religious role and differentiating him from his son John.

Young John Adams was educated at Harvard College; he practiced law in Boston and developed a reputation as a political theorist and writer. He served as a delegate to the Continental Congress from Massachusetts, and was one of those who drafted the Declaration of Independence. He was elected to the post of Vice President under George Washington, and served two terms. He was elected President in 1796, but was not elected to a second term. One of his major accomplishments was the resolution of the "Quasi War" with France, an undeclared war lasting from 1798-1800. 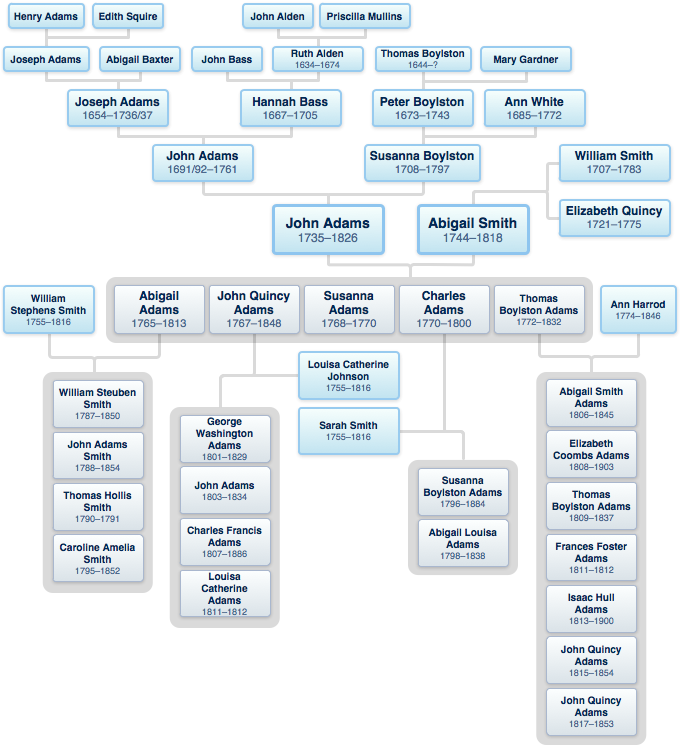 The Adams family in America stems from the emigrant Henry Adams, who married Edith Squire and settled in the Massachusetts Bay Colony. His many children emigrated with him, including a son Joseph.

On October 25, 1764, John Adams married Abigail, the daughter of Reverend William Smith and his wife Elizabeth Quincy Smith. She was born in Weymouth, MA, in 1744, where her father was a Congregationalist minister. Abigail's mother, Elizabeth Quincy, was born in 1721 in Braintree, MA, the daughter of John Quincy and Elizabeth Norton. John Quincy was Speaker of the Massachusetts Assembly and part of the Governor's council.

Abigail gave birth to six children, of which four grew to adulthood. Their children were:

Abigail Smith Adams died at their home in Quincy of typhoid fever on October 28, 1818. Her husband died at Quincy on July 4, 1826, the fiftieth anniversary of the adoption of the Declaration of Independence. They are buried beside each other in a crypt at the United First Parish Church (also called the Church of the Presidents) in Quincy.